We are the little team with a big heart,’ says Thompson after Oulton dramas.

We are the little team with a big heart,’ says Thompson after Oulton dramas.

On a blisteringly hot Sunday in front of one of the biggest crowds Oulton Park has ever seen, Dunlop MSA British Touring Car Championship rookie Bobby Thompson was the bug.

However a number of factors that both conspired to eliminate the reigning VW Cup Series Champion from the second race and prevented him from starting the third race around Oulton’s sinuous, undulating 2.26-mile Island circuit also helped shine a new light on the #19 Team HARD with Trade Price Cars team.

With pre-weekend ticket sales hitting nearly 40,000 and the balmy weather swelling that number even further, rounds 10, 11 and 12 of Britain’s premier domestic race series saw Thompson endure one of the most crushing lows of his career to date. But within that disappointment, the makings of some very significant future highs were born.

It wasn’t just the spectator areas that were packed to the rafters, the overcrowding theme also spilled over to the Oulton paddock with 28 pit garages and 32 BTCC entries. Therefor the 21 year-old Hornchurch based driver and his three Team HARD teammates found themselves working out of their awnings in the bustling, unrelenting heat of the paddock. A minor inconvenience, but as things panned out, one that showed the heart and soul and true grit of the little guys living in a pool filled with many of touring cars biggest fish.

Having qualified 28th on Saturday, Thompson knew that Sunday’s opening 15-lap race around the notoriously tough to pass Oulton circuit would be tough in his #19 GKR Scaffolding VW CC but despite starting on the lower part of the steep incline leading to Oulton’s start/finish straight, Bobby gained places when the lights turned green. But he soon felt something was amiss.

“I was actually surprised at my start,” said the current BRDC Rising Star. “One of the MG’s was slow away and I was able to take advantage of that and had a good dice with Stephen Jelley but every time I turned in the car began to judder and I just couldn’t keep up with him as the laps went on.” 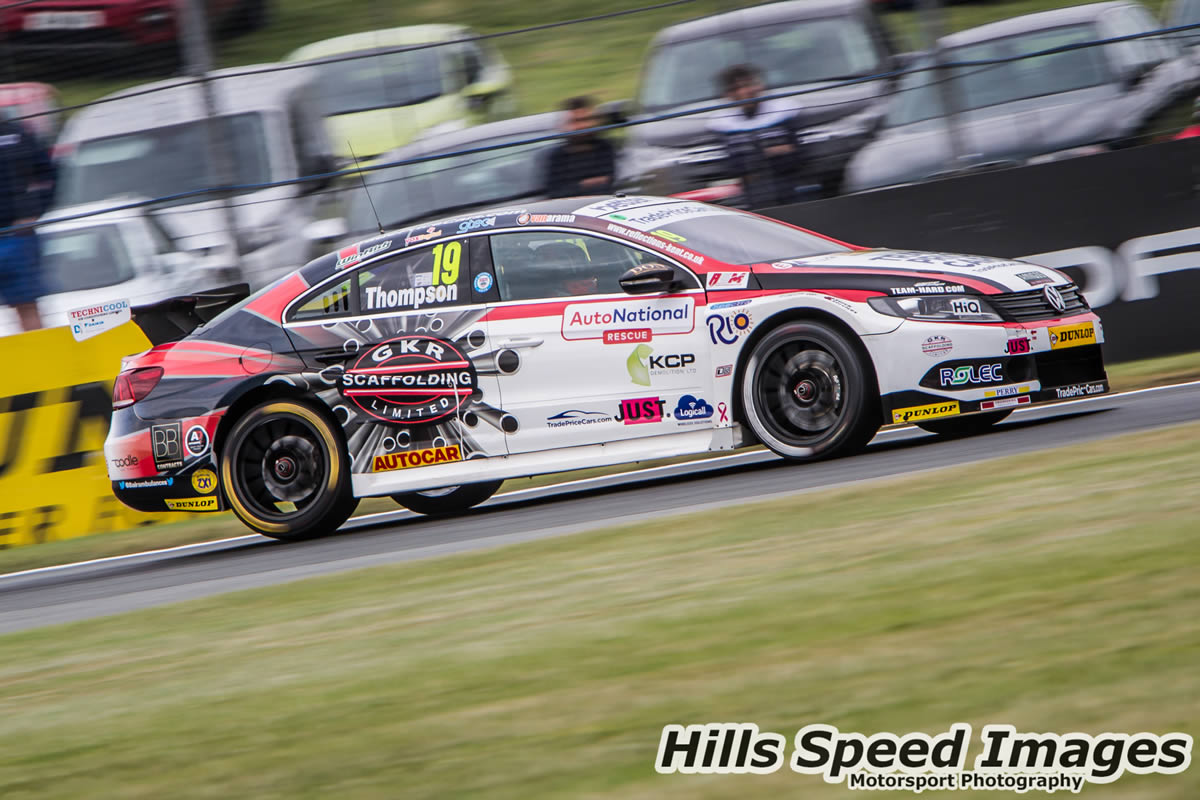 Despite this affliction Thompson was still able to lap with one second of the race leaders and although he lost a place to the soft tyre shod Tom Boardman he was able to make up a place on Senna Proctor’s factory Vauxhall before finishing in the middle of a tight train comprising the returning Dan Lloyd, Boardman, the second MG of Rory Butcher and Proctor in a disappointing 26th.

“Every time I turned into a corner the car would vibrate, said Thompson, who was 10th in the Jack Sears Trophy. “The feeling was worse in the faster corners like Old Hall and Druids and it’s not nice when you turn and then have to wait to see if the car follows. So I knew the boys had a lot of work to do before race two.”

With no racing allowed before midday the three BTCC races were crammed into the shortest space of time possible. With race one winner Matt Simpson absent from race two, Bobby would start 25th for the second 15-lap encounter with new dampers, a different ride height and several hot and weary mechanics in tow. Little did they realise that while they had just unlocked the key to Thompson’s set-up problems, their day was about to get a lot worse.

What happened to Thompson and the #19 team in race two and the hours that followed will not go down as a major, or even minor, event in the 60 year-history of the BTCC save for a couple of footnotes in the results columns. But when the 2018 season finally closes, that sunbaked, broiling June afternoon in the roasting concrete jungle of the Oulton Park paddock will almost certainly be seen as the turning point of their fortunes.

The bare facts are that Thompson avoided two separate opening lap accidents, taking to the grass on the inside of Island Hairpin to avoid Brett Smith’s stranded Honda before swiftly dispatching Sam Smelt’s Audi and catching defending champion Ash Sutton’s Subaru. For lap after lap Thompson and Sutton circulated inches apart, the lap times of the #19 machine mirroring the top six and, on one occasion, eclipsing them altogether.

Time after time Thompson jinked to the outside of the scarily quick first corner only to see Sutton move across to the racing line, leaving just enough room for the two to hurtle round at more than 100mph. This was rookie and champion battling hard but fair with champion giving rookie the respect it can take years in the BTCC to earn.

But Thompson couldn’t quite make the move stick and as Sutton began to struggle, others started to close in and, on the 12th lap as the duelling pair arrived at the Knickerbrook chicane Thompson’s VW found itself used as someone else’s brake pedal, the impact sending him cannoning into Sutton. Thankfully Sutton continued, delayed but largely unscathed but by the time Thompson had toured into pit lane, the front end damage caused by the collision had sent the engine into meltdown.

With 90 minutes before the third and final race, it was game over. Or was it?

As others shook their heads the four team mechanics for the #19 car decided that they would attempt the seemingly impossible and, in blistering heat in front of watching spectators, they went to work trying to achieve what no other team would dream of, they were going to try and get Thompson out for race three.

By the time the damaged front panel had been removed and the front end of an errant Audi cleared out of Thompson’s rear deck lid, they had 75 minutes and as the crowd in front of them swelled, Kieran, Elliott, Alex and Jake set about their goal. Inside 20 minutes the damaged engine was out, then an agonising wait while engine builders Swindon attached the wiring and other ancillaries to the new unit. Within 15 minutesof receiving the new engine and just 60 minutes after they began work, they had put on the clutch and had the new unit inside the #19.

Fans who had merely been walking past realised they had missed several of the support races and visibly began to urge the team on. In the big pond that is the BTCC there are still several very small fish with huge hearts and they were watching one of those small fish try and do what the bigger fish wouldn’t dream of attempting, in conditions more akin to the Dakar Rally than leafy Cheshire.

And then it was over. The call went out for drivers to form up at the grid gate and it was time for the three remaining Team HARD cars to leave their awnings. The time taken to attach all the engine ancillaries together safely had passed. Sending the #19 out without ensuring all the levels and mapping were correct could have caused another, budget destroying failure. The disappointment was palpable and the fans drifted away, gutted that their new favourite driver wouldn’t be out in the final race. Had the new engine been ready for installation when it was needed and had it been at any other venue with the standard BTCC timetable it would have been a different story.

“I’m obviously devastated at missing the last race but I can’t thank the boys enough for what they did for me to try and get me out,” said Thompson. “I’m just as gutted for my sponsors and supporters that I wasn’t able to show them what we could do in the last race. The car just lit up in race two and my lap times showed that. I’ve raced cleanly all year and it’s just a shame that someone else’s mistake cost us a chance at performing in front of the biggest crowd I’ve ever raced in front of.

“But the lads just showed what kind of team we are. We may be a small group but we have a big heart. Everyone else told them they couldn’t do it but they nearly broke themselves just to get me out and when you have a crew like that behind you it just makes you want to work harder than ever to get the results that they deserve, not just for the people whose financial support has got me here.”

So Oulton Park may have been a bitter pill to swallow for Bobby Thompson but in the worst times the very best qualities of one of the BTCC’s small fish shone through.