Tough weekend but more points for Hill at Croft 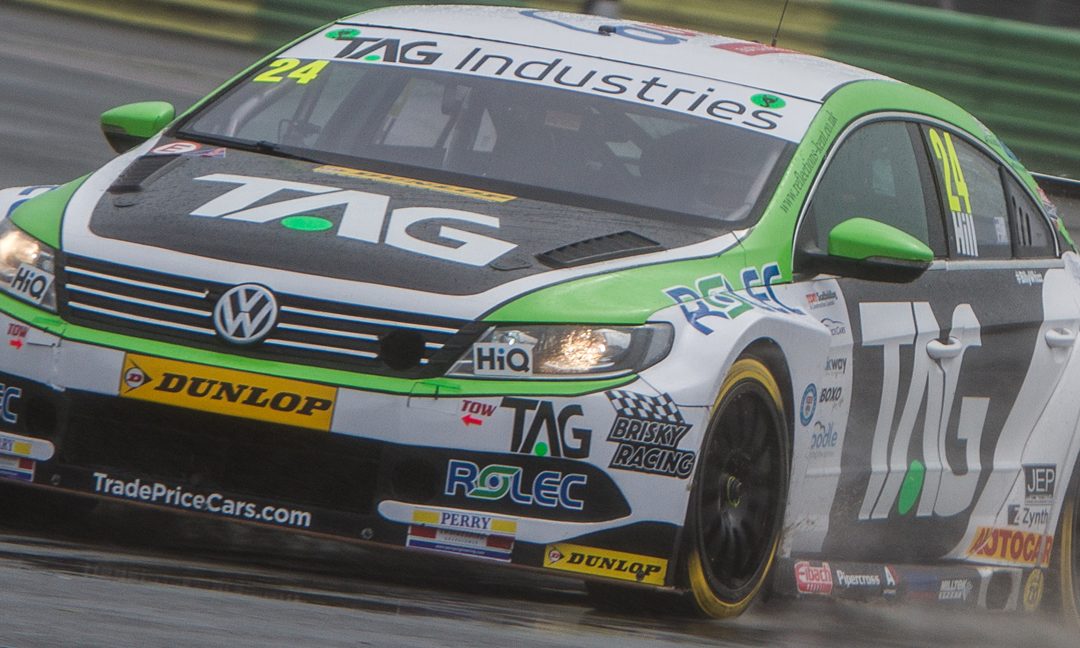 A soaking wet Saturday saw tough conditions for all Team HARD’s drivers, so going into qualifying it was always going to be challenging, with Hill initially in the top-ten but dropping to 18th overall as the Red Flag came out.

Luke Davenport had run across the grass and the oil cooler had been pulled loose, spreading oil onto an already greasy surface. As a result a frightening 11 car accident saw Davenport, Jeff Smith and Aron Taylor-Smith all injured and taken to hospital – Davenport with multiple injuries, Smith with broken ribs and Taylor-Smith with a broken leg, and several other drivers incredibly fortunate not to have been hurt themselves.

“I saw the Red Flag and immediately the team radioed to slow right down, and when I went past it was like an aircraft accident with bits of cars and badly broken chassis everywhere. It reminds you that these cars are incredibly strong but these were such heavy impacts that it’s amazing the drivers aren’t more seriously hurt. It’s horribly that Luke, Jeff and Aron are hurt, and I really feel for them all and their friends and family, and hope to see them all back on the grid with us very soon” said a sombre Jake after qualifying.

With all three drivers withdrawn it meant a 16th place start for Hill, and when Proctor and Plato ran wide Hill crossed the line at the end of lap one in 14th place. Starting on the option ‘hard’ tyre and with an unknown set-up after no dry weather running, Hill struggled for pace but fought a superb defence, holding off Austin, Jackson and a recovering Plato for several bruising laps. With Price and Cole tangling, it meant as Plato, Austin and Jackson forced by, Hill fought his way to a very hard-earned 13th place – which became 12th when Jackson was penalised.

“That was so hard! I got bashed about several times and on the option tyre with an unfamiliar set-up we were struggling, so I’m delighted to score some points. Also I have apologised to Stephen Jelley as I hit him an pushed him off earlier – it was my mistake and was a genuine error. I have been penalised for it which I think was only fair.”

On the ‘Prime’ tyre for the remaining races and starting 12th, a blistering first lap saw BRDC ‘Rising Star’ Hill slice past Plato and Austin at turn one, and as Chilton and Ingram dropped out he finished lap one in a remarkable 8th place – and 2nd in the Independant’s Category behind Mat Jackson.

Great pace saw Hill edging closer to Jackson but Plato’s Subaru was closing fast and the 95 time race winner soon edged by in the factory-supported car. This left Hill racing with race-one rival Austin closing. As they approached Tower Bend, Austin lunged to the inside from a very long way back and slammed into the side of the #24 machine.

Instantly this broke the rear suspension and caused a high-speed off at the Jim Clark Esses (see photo below). Crawling back to the pits Hill’s crew speedily replaced the broken toe-link, and allowed Hill to complete the race, albeit by now 4 laps down and in a very frustrated 25th place.

“After hitting me in race one Rob (Austin) came and apologised which was nice! Then he hits me and breaks the suspension and ruins my race. It’s beyond frustrating as the car felt really good and we were quicker than Jackson so could have challenged for the Independant’s Win. It’s such a shame for TAG Racing and all my other partners and guests because we deserved a top-ten finish there.”

Starting 25th Hill battled with Ingram, Newsham and Goff, working his way forward and eventually making his way to 19th position, but frustrated at what might have been after the race two incident.

“It’s been so tough with the terrible accidents on Saturday and then not being able to get the result we should have in race two. The TAG Racing crew have worked so hard so a huge thanks to all of the boys for their efforts. We have had some guests from Ecoflam and Zynth here this weekend, and as always a huge ‘thank you’ to all of our superb partners Rolec, Sportif Cars, Brisky Racing, Ecoflam, Danfoss, AW Supply Services, Bill Rawles Classic Cars and we were delighted to welcome SpinCar and Litchfield on board with us at Croft.

The series now heads into a summer break, with racing resuming at Snetterton on the 29/30th July, but the teams testing at the circuit at the Dunlop Tyre Test on the 5th and 6th July.

“I’m looking forward to a couple of decent days testing to try some of the set-ups we really want to try. Most of the tracks remaining will suit the car, so if we can get some solid data from testing we should be in good shape” smiled Jake.

“Looking forward to re-grouping and really going for it in the second half of the year!”