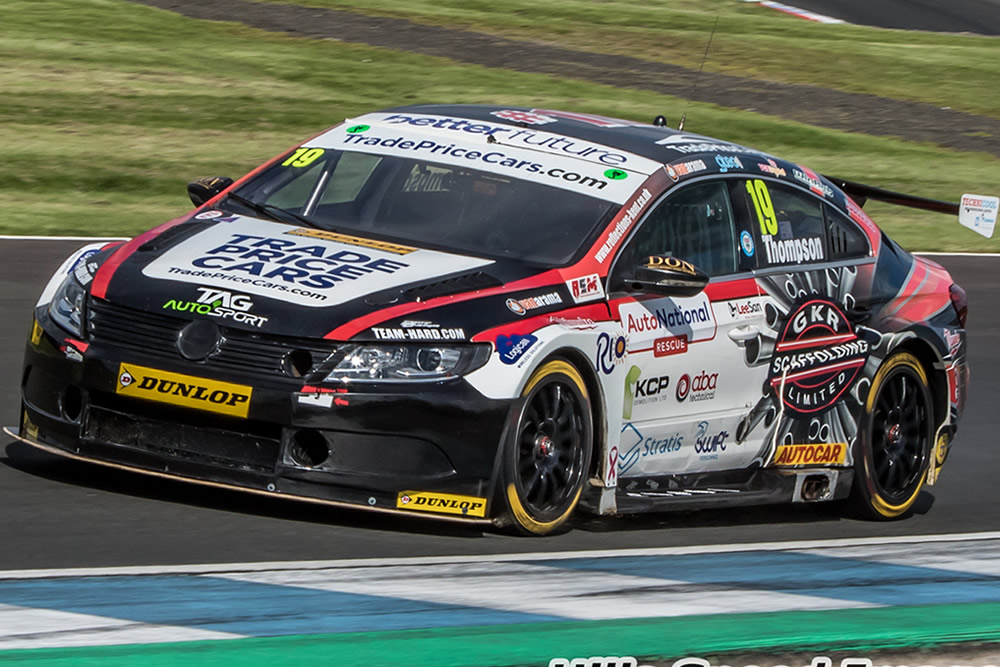 Thompson’s oily and somewhat spectacular demise at the very start of Saturday’s usually frantic 30-minute qualifying period was the final act of a day that began promisingly but turned sour when the 22 year-old Hornchurch based driver, by his own admission, ‘overcooked things’ at Duffus Dip while sitting tenth fastest during the opening free practice session of the weekend.

“It is hard to know where to start after a day like this,” shrugged a philosophical Thompson as he watched the remainder of qualifying from the pit wall that overlooks the rolling 1.27-mile Scottish venue. “Obviously this is my first time here and I just overcooked it slightly on my seventh flying lap going through turn one and spun. The car felt so good and I was just attacking a bit too much a bit too soon. The problem was that I hit a ditch, which ripped the front splitter off and caused a bit of damage which meant I missed the whole of second practice.”

Following his superb showing at Rockingham two weeks ago and another strong performance from his Team HARD teammate Mike Bushell in practice, there was an optimistic mood in the #19 camp heading in to qualifying, although within 30-seconds of the green flag going out to signal the start of qualifying, hope had turned to despair.

“The team signalled for me to go out and do our usual one lap and then pit to cross over the tyres and as I came out of the second corner I said to my engineer that the rear end felt a bit loose but apart from that everything seemed fine until I got to Clark’s corner and smoke started appearing in the cockpit. I pulled off as soon as I could and then I realised that the rear end felt loose because I had oil over my tyres.”

With a liberal soaking of oil covering half the lap the session was red flagged and the reigning VW Cup Series Champion was left contemplating a race day that was challenging enough to begin with on a track that traditionally doesn’t suit the VW CC but is now as mountainous as the spectacular countryside that surrounds Knockhill.

“Looking at the positives, firstly the car felt good this morning, secondly Mike [Bushell] has shown we have a decent package, thirdly I’m now in great shape to move into the top three in the Dunlop Forever Forward standings and lastly, the ITV4 viewers should get to see plenty of overtaking as I’m carrying their on-board cameras for the races. And it is supposed to rain as well and I love driving in the rain!”

If you aren’t making the journey to Knockhill for race day, here are the start times for all three BTCC races, which as always, will be live and uninterrupted on ITV4.