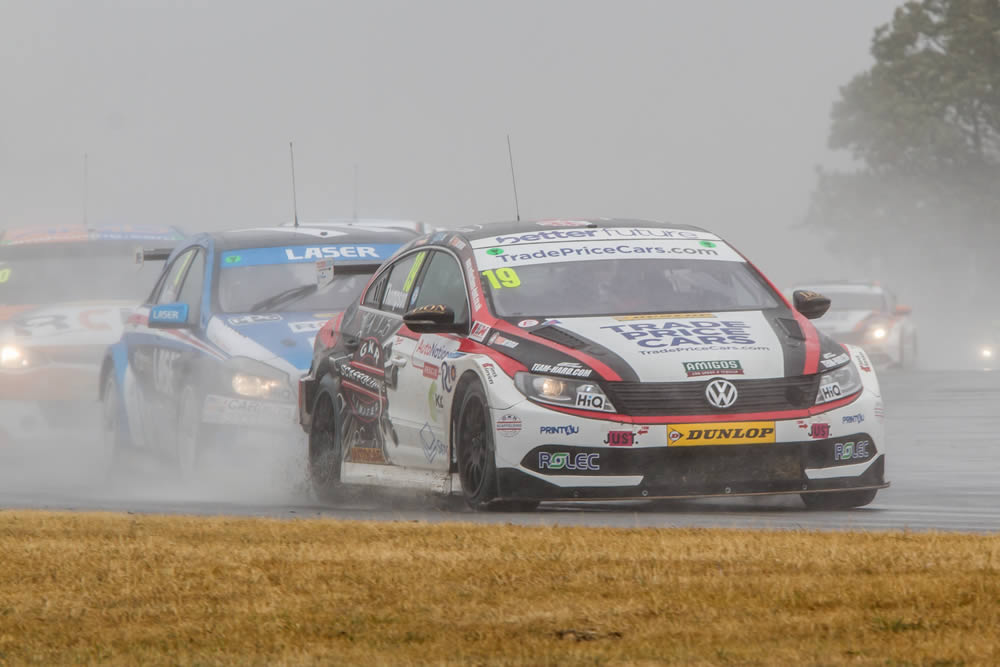 After celebrating his 22nd birthday with a career best 20th place effort in Saturday’s first of two BTCC qualifying sessions around the twisting 2.96-mile Norfolk venue, the reigning VW Cup Series Champion and his #19 Team HARD with Trade Price Cars squad battled through a dramatic shift in the weather to finally show the touring car world the potential that had largely remained hidden throughout the first half of the 2018 season.

“I had high hopes heading into the weekend but to come away with two lots of points and my first top ten is just the best birthday present imaginable,” beamed the Hornchurch based driver, who slipped from 15th to 18th on the final lap of a wet opening race after contact with another driver before storming through the field from 30th to 14th in race two and then from 27th to 10th in the weekend finale. “The car was the best it has felt all year, the tyres always felt like we had grip left in them and I gelled really well with the new members of my crew. I was happy with how I drove in the last race at Croft but now I feel that I have really started to repay the faith that my sponsors and my team have put in me.”

The heatwave that had held most of the UK in its sweltering grip for some two months and turned the usually plush green grass that surrounds the sinuous Snetterton layout into a starched shade of yellow, broke spectacularly the night before qualifying with temperatures dropping to a more reasonable level on Saturday before plummeting to Donington-esque proportions on Sunday. Almost gale force winds and near constant rain saw shorts replaced with ponchos but it didn’t dampen the spirits of a huge crowd or the driver of the distinctive #19 GKR Ltd backed Volkswagen CC even though visibility was going to be an issue for the current BRDC Rising Star.

“I love the wet but the windscreen wipers seemed to have a mind of their own and just wanted to work when they felt like it which was a bit of a challenge,” said Thompson, who made good progress from the start of the first 12-lap race and tagged on to the back of a three car scrap for 13th between Matt Neal, Colin Turkington and Tom Chilton, just one place out of the points..

“The car felt really responsive and I should have made my move on Colin as soon as I caught them as I was quite a bit quicker than him but he would always get a better exit out of the slow corners. At one point Matt left half a gap for me going through the Bombhole and I just had to go for it even though he started to close the door.

“We made a bit of contact and Matt kept the place and nudging him felt like I was punching my dad in the face, it just felt wrong as I grew up watching Matt winning titles but I just had to go for it and there was no harm done at the end of the day.”

A maiden championship point looked likely as Thompson started the final lap with a move into Riches on Aiden Moffat but contact on the exit of the corner forced the #19 onto the grass and dropped him to 18th.

“It’s obviously disappointing about losing out on a point in race one and when we missed pit lane closing to get out on time for race two it was another blow,” continued Thompson, who was supposed to start from the 9th row for the second ‘regular’ 12-lap race of the day on a slippery but drying track but instead started alongside race one winner Jack Goff who also missed pit-lane closing at the back of the 31 strong field. “But in a strange way I didn’t feel down about it because we were making set-up changes to the car that absolutely transformed it for the conditions and it was an absolute dream to drive.”

Setting the fastest time of all through the second sector Thompson charged through the field to cross the line in 14th place, passing Croft race winner Dan Lloyd on the penultimate lap to pick up not one but two championship points after a lengthy dice.

“It definitely felt like a weight off my shoulders,” commented Bobby on finally breaking his championship duck. “It was a really fun race as there were lots of different lines you could take. Some parts of the track were a bit greasy and so many people put wheels on the grass there was loads of muck everywhere but we chose to put a wet set-up on slick tyres which just gave me tonnes of grip and I could just catch, pass and pull away from people all race long.”

But the best was yet to come in the 20-lap diamond double third race. Starting 27th after a troubled qualifying shootout on Saturday evening, Thompson picked up a couple of places in the early laps as several more experienced drivers hit trouble but despite a grassy moment on the exit of Riches shortly after an early safety car period, a brief rain shower saw #19 machine swiftly catch a snarling pack that covered sixth place back to 18th.

“The last five laps were some of the hardest, but best I have ever driven,” said Bobby who worked his way passed series returnee Ant Wharton-Eales, fellow rookie Sam Smelt and experienced duo Stephen Jelley and Rob Austin in quick succession to start the 21st and final lap directly behind Ollie Jackson and Senna Proctor.

“Coming into the final corner I could see Ollie defending and both he and Senna ran a bit wide on the exit so I got a good run on them and just hugged the pit wall as we went three wide to the chequered flag. I knew I had got Ollie but it was touch and go with Senna as we were literally centimetres apart at the end.”

Initially the timing screens placed Bobby in 11th place but a subsequent one-second penalty for the factory Vauxhall driver elevated the #19 machine into tenth place and third in the Jack Sears Trophy standings, sparking wild celebrations in the Team HARD garage and one or two emotional scenes after the toughest half-season of Bobby’s career to date.

“This feels like a win for me, my family and for my team,” said Bobby as he reflected on his weekend. “The new engineer Timo made some massive changes to the car and I am just grateful to Tony [Gilham] for keeping faith in me. We all know that we weren’t where we needed to be in the first half of the year but it wasn’t because the guys weren’t working hard because they grafted non-stop but now I feel like I started to repay the sponsors that have put me on the BTCC grid which has been my dream since I was a kid.

“If you had told me I would have my first top ten finish this weekend at the start of the summer break I wouldn’t have believed you but the team have worked so hard and made a lot of changes that we really needed and now I think we can score points in every race.”