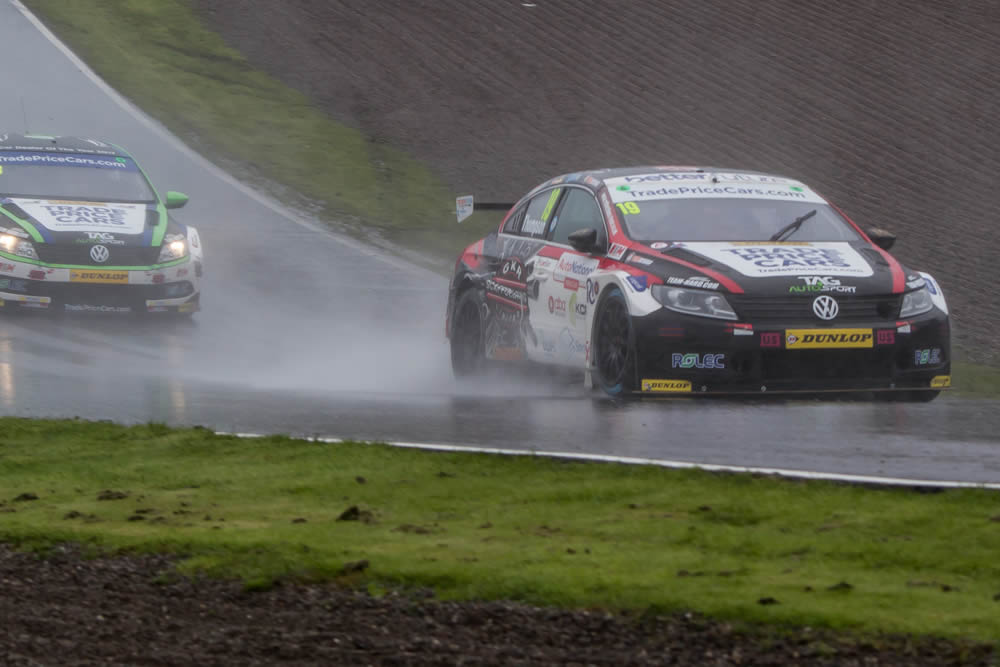 Fresh from a seasons-best seventh place finish at the Rockingham Motor Speedway, the 22 year-old Hornchurch based driver arrived at one of the UK’s most scenic and unique circuits in a buoyant mood, despite the fact that the undulating layout of the only non-English track on the calendar hasn’t traditionally suited the VW CC he pilots.

“My first trip to Knockhill was certainly a memorable one, even if it was for all the wrong reasons,” reflected Thompson, whose sole classified finish of the weekend aboard his #19 Team HARD with Trade Price Cars VW CC was a 20th place effort in the third and final race of the weekend. “The track itself is awesome, but it is just a pity that we only managed a handful of laps when it was dry. I was still pretty confident on race morning when we saw that all the races were going to be wet, but missing race one was just a killer and we never recovered from that.”

The eighth race weekend of the BTCC’s  record-breaking 60th anniversary season began well enough for the 2017 VW Cup Series Champion, who was comfortably inside the top ten during the opening half of the first of two free practice sessions when a slight error resulted in the BRDC Rising Star suffering his first off track excursion of the season.

“I just overcooked it slightly on my seventh flying lap going through turn one and spun,” recalled Thompson. “The car felt so good and I was just attacking a bit too much a bit too soon. The problem was that I hit a ditch, which ripped the front splitter off and caused a bit of damage which meant I missed the whole of second practice.”

Heading in to qualifying with half a dozen laps under his belt was hardly ideal but with the ITV4 on board cameras now installed worse was to come for when the signal was given to start the critical 30-minute timed session, Thompson left the pits completely unaware that an oil line was loose and that the distinctive #19 GKR Ltd machine was doing its best impression of the Exxon Valdez. Half way around his out-lap and with cars skating off the road behind him, smoke billowing in to the cockpit was Thompson’s first warning, which came too late for the engine, triggering a long, and expensive repair job on Saturday night as a new power unit from Swindon was installed.

“The team signalled for me to go out and do our usual one lap and then pit to cross over the tyres and as I came out of the second corner I said to my engineer that the rear end felt a bit loose but apart from that everything seemed fine until I got to Clark’s corner and smoke started appearing in the cockpit. I pulled off as soon as I could and then I realised that the rear end felt loose because I had oil over my tyres.”

With no time set in qualifying Thompson was face with starting the first of three 24 lap races from 31st and last on the grid but when Sunday dawned shrouded in grey cloud and seemingly incessant rain, the well-known wet weather expert still felt at least one, possibly two points scoring finishes were obtainable. However, those hopes were extinguished the moment he pulled onto his grid slot and the BTCC grid officials spotted a trail of oil coming out from the underside of the #19.

“It is tough to summarise a race that basically didn’t happen,” said Thompson, who recorded his second DNS of the year and now faced starting race two from 31st and last on the grid as well. “We got the car back to the garage and the engine builders from Swindon checked to make sure it still had all its oil, which it did. It was simply a case of some of yesterday’s oil that went into the sills under the car started leaking out as the car warmed up. This was more frustrating than yesterday as we knew that nothing was wrong with the car and that basically killed our weekend but I understand what the officials were saying and you can’t have a car that is leaking oil going out on track, especially in conditions like we had.”

With the rain intensifying and the #19 machine now sporting a freshly valeted underside, Thompson made a good start to race two, passing several cars until an early race safety car period triggered the end of his challenge when the driver directly behind him failed to slow down for the safety car boards, giving Thompson’s car a whack to the rear that forced Thompson into the pits for repair the damage.

“I’ve always said that I love racing in the rain but race two was the worst conditions I’ve ever experienced,” added Thompson, who returned to the track three laps down but was classified as a non-finisher in 24th place when a red flag brought about an early conclusion to proceedings. “Being at the back meant I couldn’t see a thing but I picked up a couple of places and was moving forwards. Obviously someone behind me misjudged their braking in the spray and gave me a whack which meant I had to pit and lost three laps.

“But I knew that others would have problems and so we went back out as we only did seven laps yesterday and none in race one and even with no time to adjust the set-up our lap times were in the top 15 and a 12th row starting slot is much better than a 16th row starting slot, especially in these conditions.”

Even though the rain was beginning to abate ahead of the third and final race of the weekend, Thompson admitted to making a cautious start just to avoid incurring any potential damage and ended the first lap in 29th position. But with the ability to actually race for the first time all weekend Thompson quickly began picking off drivers one at a time despite the lack of overtaking opportunities, moving ahead of Mike Bushell, Matt Simpson, Ollie Jackson, Carl Boardley, Ollie Pidgley and Jason Plato in the opening ten laps before setting a series of laps quicker than race leader Tom Chilton, including a 56.260-second effort on lap 16 that would stand as the fourth fastest lap of the entire race and the second fastest of all by a Front Wheel Drive car.

“If only race three was race one then our weekend would have been a lot different,” concluded Thompson, who passed Brett Smith, Tom Oliphant, James Cole and Senna Proctor in the second half of the race and was closing on Glynn Geddie for 18th place when his rear tyres began to go off. “The car was really good and I could just attack with confidence in the grip levels although I think I used the rear tyres a bit too much as in the last couple of laps they started to go off and Jason was able to pass me back right at the end.”

Thompson eventually took the chequered flag in 20th place and remains in 27th position in the overall BTCC Championship points table, 18th in the BTCC Independents standings but slipped to 10th in the Jack Sears Trophy table with six races of the 2018 remaining starting in three weeks’ time at the ultra-fast Silverstone National circuit in Northamptonshire.