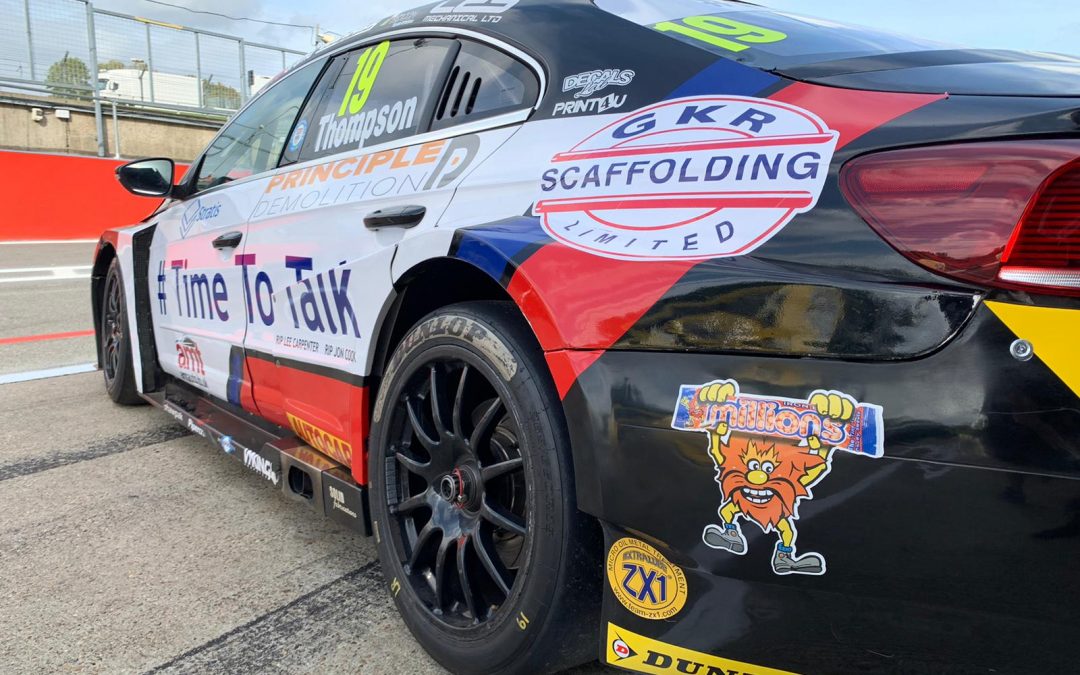 Today (Thursday) is World Mental Health Day and this year’s focus is on Suicide Prevention. Suicide is the most common cause of death among men aged between 20 and 49 in the UK and of the 6507 recorded suicides in the UK in 2018, three quarters of them were men. Last year, on average, 18 people per day committed suicide in the UK.

Sadly in recent weeks Thompson’s training partner and long-time family friend Mr Lee Carpenter as well as a colleague of Thompson’s principle sponsor GKR Scaffolding Mr John Cook, have taken their own lives and in addition to #TimeToTalk and #AskTwice being displayed prominently on Thompson’s car, the 23 year-old Hornchurch based driver will also carry both men’s as a mark of respect to them and their families.

“In the last week my family have been devastated by Lee’s passing and so I understand the emotions you go through when someone very close to you takes their own life,” commented Thompson. “You just wish they had spoken to you and you ask yourself if there is anything I could have done. Sometimes a simple phone call or text to ask ‘Are You OK?’ could make the difference. It can’t bring Lee back but if we can encourage people, mainly men, to talk about how they are feeling, it might help others feeling the same.”

“Every day two people in the construction industry take their own life. This is a shocking statistic and as an owner of a construction company, one that I cannot ignore.

“Our mental health is difficult for all of us to talk about, especially for men. Last year GKR Scaffolding launched our BetterFuture, Better Mental Health programme to break down the stigma of Mental Health, encouraging our staff to talk and signpost them to support if needed.

“This year we are supporting the #AskTwice campaign and wanted to extend the message outside GKR. We want everyone to look out for their colleagues and friends and when asking them if they are okay, to ask again. People are more likely to open up on the second time of asking. Part of suicide prevention and mental health support is getting people talking. We want this message to be seen by the motorsport community and hopefully get more people, especially men talking about their mental health.”