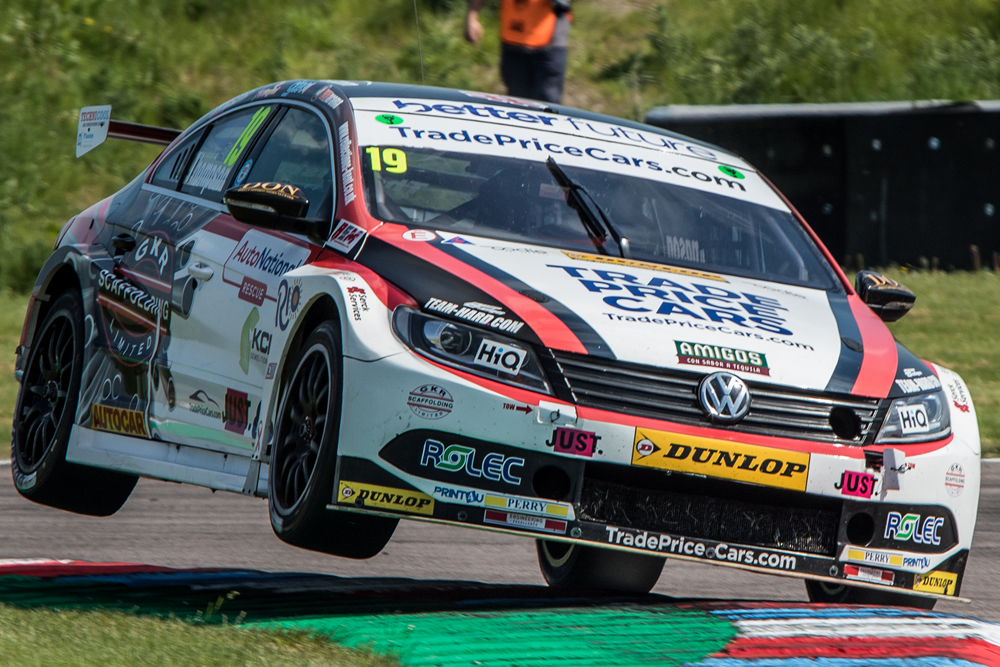 There is no denying that rounds seven, eight and nine of the 2018 Dunlop MSA British Touring Car Championship at a sweltering Thruxton circuit were anything other than a struggle for reigning VW Cup Series Champion Bobby Thompson and his #19 GKR Scaffolding Team HARD with Trade Price Cars team.

But despite battling through a weekend where all four Team HARD VW CC’s chewed up tyres faster than the sun-baked BTCC fans drank their complimentary cans of ice cold Rio Soft Drink, the 21 year-old Hornchurch based series rookie took a philosophical approach to Sunday’s trio of high speed blasts through the Hampshire countryside.

“It was definitely an up and down weekend, with more downs than ups,” commented the current BRDC Rising Star, who secured three more race finishes at the 2.35-mile Thruxton speedbowl, a track renowned as a car and tyre breaker. “Obviously I’m disappointed not to score any points but nobody on the team managed to and although we tried absolutely everything we could think of neither myself Jake [Hill], Mike [Bushell] or Michael [Caine] could get more than a few laps out of our tyres before it was like driving on ice.”

A successful pre-season test at the track where average lap speeds easily top 110mph, gave Thompson a cause for optimism heading into the third weekend of the 2018 season but with temperatures soaring into the high 20’s and Thruxton’s notoriously abrasive surface acting more like sandpaper than tarmac, it became clear that the main positive from the weekend would be numerous chances to sport his Dirty Dog sunglasses.

Having flirted with the top 20 during Saturday’s two practice sessions, Bobby watched as his qualifying set-up gained him two tenths while everyone else’s gained them more than double that to leave the #19 GKR Scaffolding backed machine on the penultimate row of the grid for the first 16-lap test of endurance.

“The whole team went through everything we could think of on all four cars on Saturday night,” continued Thompson, who made a solid getaway in Sunday first race and quickly gained several positions while grip levels allowed. “On all four cars the tyres actually worked really well for the first four or five laps or so but then we just lost all grip and it was even worse when we were following another car closely or had to defend.”

Setting his fastest race lap on lap three Bobby soon found his ability to progress towards the top 20 hampered by the combination of his lowly grid slot and, by his own admission, a lack of practice starts. Chasing Ollie Jackson’s Audi and Tom Boardman’s MG into the latter stages of the race Bobby suffered a near catastrophe three laps from home when Boardman and Caine clashed in the final chicane, forcing the #19 machine over the grass in avoidance.

“It happened in a flash right in front of me and all I could do was flick the car right onto the grass and hope that the splitter didn’t break. Even though the car had nothing left to give I felt that I would have a chance to gain a few more spots before the chequered flag as by that point nobody had any grip left.”

Although Bobby regained the circuit without damage, he was now in 26th place, several seconds behind his nearest rival and had to console himself with the distinction of being the fastest Team HARD driver by almost half a second.

With a near record Thruxton crowd watching on, hundreds of whom took time to visit the all-new Rio Soft Drink stand in the paddock that was raising money for the eight air ambulance charities for whom Bobby is an ambassador, the #19 machine slipped back a few places at the start of race two before Bobby began one of his trademark charges.

“When I get the hang of the starts I will have much better track position in the early laps, which are so important if you want to score points,” continued Bobby, who set his fastest race lap on lap three and, was the fastest of the toiling Team HARD quartet.

“I can only put it down to my own lack of experience when it comes to the starts as I can’t go and do what a lot of other drivers do and just spend a day wrecking a clutch doing start after start. But at least it gives me plenty of overtaking practice and I have shown all year that I can race the veterans cleanly and get the better of them.” 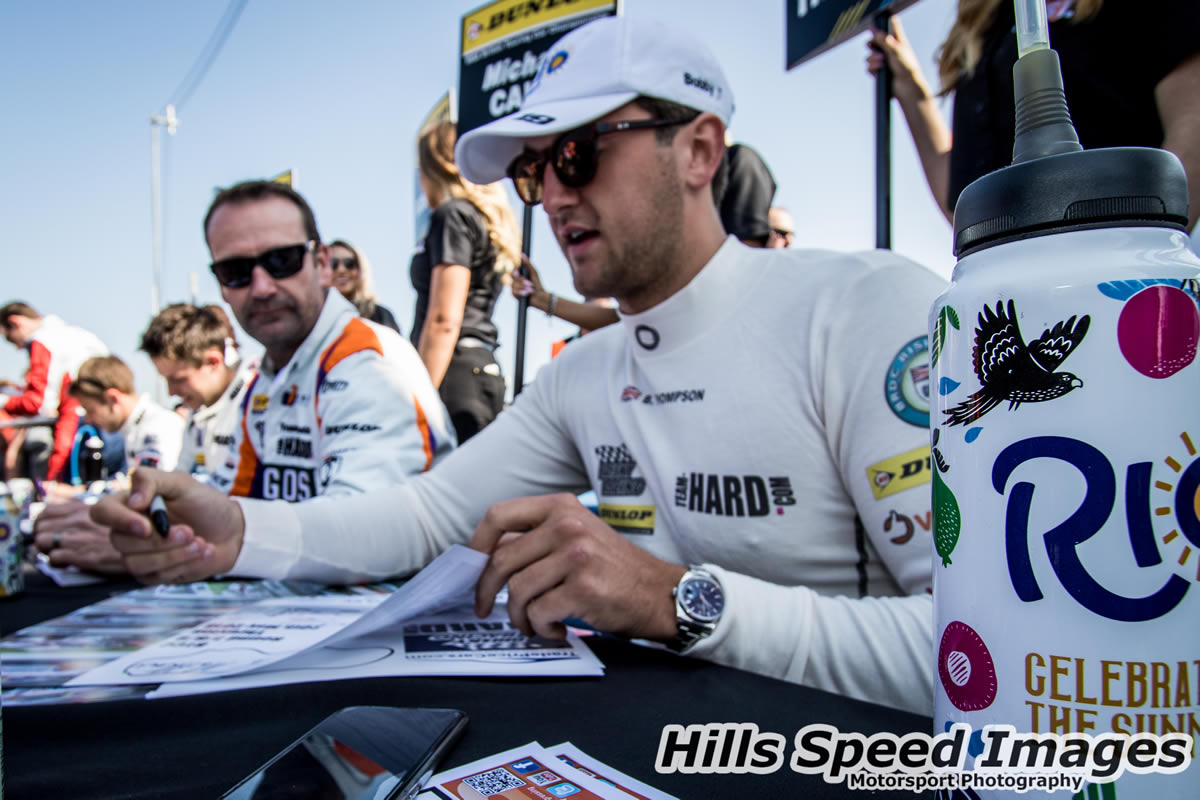 Overtaking four cars in a single lap while his tyres allowed him to, Bobby was quickly on the fringes of the top 20 but by half distance he found himself just fighting to hang on through Thruxton’s dauntingly fast sweeper sections whilst trying to pass James Nash’s Honda. But Bobby tenaciously stuck to his task and finally ousted Nash on the final lap to claim a deserved 20th place and a maiden top six finish in the Jack Sears Trophy standings. More importantly Bobby had elevated himself onto the tenth row of the grid for the final race of the day and within striking distance of an unlikely championship point.

“The car actually felt amazing for the first couple of laps,” said Bobby who, for the first time all year actually gained places away from the start of the final race to move into a strong 17th position. “The car worked best when I had clear track all around me and for a while I had that. But of course with 32 cars you are always going to be in a battle sooner or later and when Dan [Cammish], Rory [Butcher] and Ash [Sutton] got onto my rear bumper it was a different story.”

In arguably the most impressive drive of his short BTCC career to date Bobby was able to keep the #19 machine inside the top 20 and within striking distance of the points as the race progressed despite being surrounded by a swarming pack of far more experienced rivals. However a penultimate lap brush with defending series champion Sutton forced Bobby wide and allowed several drivers to sneak through, leaving him a disappointed but philosophical 22nd.

“The touch with Ash was nothing major and he came up and said sorry afterwards,” commented Bobby, whose trio of race finishes helped move him into the top 10 in the Jack Sears Trophy standings. “At the end of the day he is a champion and I am a rookie and although I tried to keep him behind me I knew that at some point he would say ‘OK, I’m coming through whether you like it or not.’ The main thing for me is that I’m racing everyone hard but fair and earning their respect.

“Although I am disappointed that I couldn’t give my supporters and my guests from GKR and Vanarama a points scoring finish, I’m not as frustrated as I was after Donington Park because it was clear early on that there was nothing anyone on the team could do to help us get the tyres to last.

“I am pleased I was fastest of the team in the first two races and only a couple of thousandths slower than Jake in the last race but as thrilling as Thruxton is to drive, I’m glad we only race here once a year. I never thought I would say this but I’m hoping the weather at the next round is more like it was at Donington than today!”

Bobby and the rest of the BTCC brigade now have three weeks to prepare for rounds 10, 11 and 12 of the 2018 season, which take place at Oulton Park in Cheshire on the weekend of June 9-10.