Thompson Rounds Out ‘Emotional’ BTCC Finale in the Points 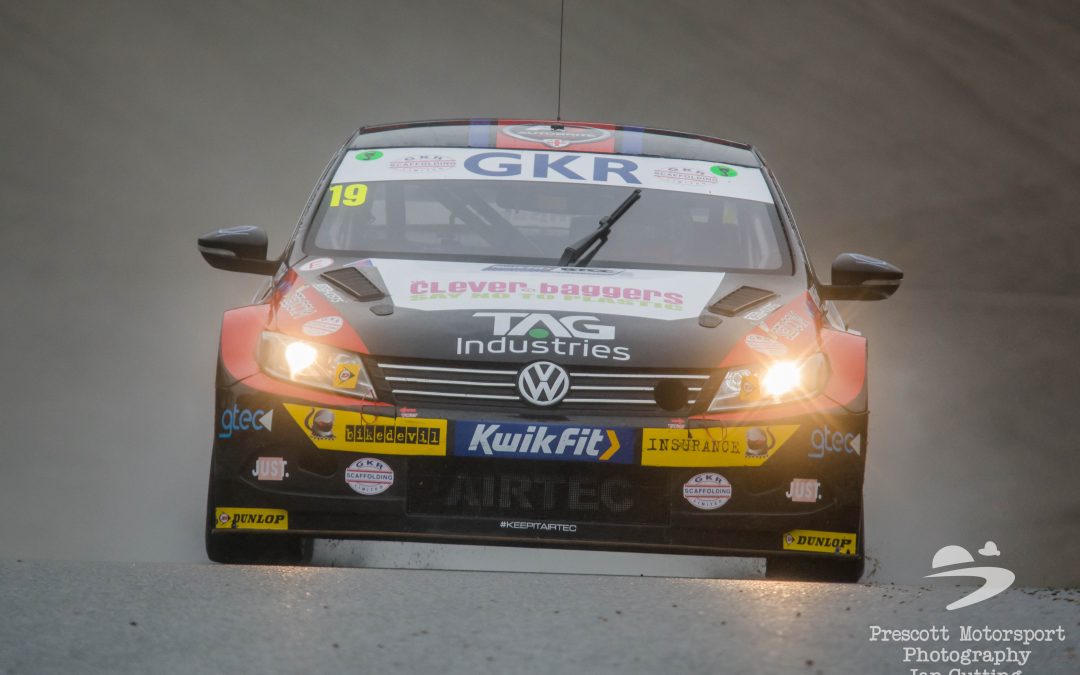 Bobby Thompson completed his second year in the Kwik Fit British Touring Car Championship with a tenth points scoring drive of the season at Brands Hatch in Kent on a weekend he described as “emotional and very special,” both on and off the track.

The 23 year-old Hornchurch based driver sported a different look to his #19 GKR Scaffolding with Autobrite Direct Team HARD VW at the tenth and final weekend of Britain’s premier race series as he utilised the tremendous popularity of the BTCC to raise awareness for last Thursday’s World Mental Health Day.

Replacing his usual sponsor decals with the slogans #TimeToTalk and #AskTwice in support of the campaign to reduce the rising suicide rate among men in the UK, the current BRDC Rising stars car also displayed tributes to his close friend Lee Carpenter and GKR employee Jon Cook who both took their own lives in recent weeks.

“This has been a very emotional weekend but also a very special one,” said the ever popular Thompson, who is known throughout the paddock as Bobster. “We came into race week devastated by the loss of Lee but by the end of the day on Sunday we just looked back on the last five days and realised it was a very special weekend for lots of reasons.

“I’m grateful to Neil Rowswell from GKR who came up with the idea of taking his logos off the car and replacing them with #TimeToTalk and #AskTwice and I’m also very grateful to the Championship themselves for taking the time to publicise World Mental Health day during their championship deciding week.

“But what has hit me and my family and the people I work with behind the scenes the most is the level of support and encouragement I have had from the BTCC fans themselves. They are the ones who have shared and promoted this and taken time to message me or come up and see me in the paddock just to say thank you and to share their own experiences with Mental Health issues. If what we have done this weekend makes a difference to one person out there who is struggling then it has been worth it.”

If things were busy off the track, they were equally as busy for the 2017 VW Cup Series Champion on the track with the classic 2.43-mile Brands Hatch Grand Prix track providing one of the toughest challenges of the season to the 30 BTCC competitors.

Intermittent rain and continually changing track conditions spoiled much of Saturday’s two free practice sessions with Thompson running minimal laps in an effort to save tyres and with the all-important 30-minute timed qualifying session also afflicted by increasingly persistent rain and two separate red flags, finding a clear lap and the best track conditions was harder than ever.

“I wasn’t so worried about losing track time in practice as Brands is my home track and I know it like the back of my hand,” continued Thompson. “And after a full season we also know where we are with the set-up of our car and the issues we have to work around so my biggest concern was having my quick laps disrupted by other people going off in the rain.”

As it turned out, Thompson only lost one of his flying laps in qualifying to a red flag and finished the session with 18th fastest time despite having to deal with persistent understeer.

“I’m reasonably happy with where we are as it gives us a good shot at getting some more Championship points tomorrow,” concluded Thompson at the end of Saturday’s activities. “Of course I want to be further up the grid and be fighting for race wins and podiums but you have to be realistic and just make sure you maximise the potential of what is underneath you.”

With a bumper crowd on hand to watch Sunday’s trio of 15-lap races Thompson made a poor getaway in race one and completed the first lap in 21st place. By the fourth lap Thompson had already regained those places and was running 17th when the safety car was called out. As the field slowed down spots of rain began to fall and with more moisture forecast more than a dozen drivers, Thompson included, elected to pit for wet tyres.

Unfortunately a mix up in the pits meant that Thompson was delayed by nearly a minute before he could return to the track and with the safety car period over Thompson found himself in 28th position and 80 seconds behind the leaders with nine laps remaining.

“What can you say?” remarked Thompson, whose renowned wet weather prowess saw him reduce the deficit to the other wet shod cars in front of him before the chequered flag fell, leaving him a dejected 21st. “We took the gamble, had a problem in the pits and as a result it didn’t pay off. That’s just racing and the biggest problem we had was that by the time I got back on track, I was nearly half a minute behind the other drivers who were on wets so I couldn’t even make much progress and pass them.”

Race two was another tyre strategist’s nightmare with the track wet but no rain actually falling. Like most of the field Thompson opted for wet tyres but in conditions he usually revels in, a 16th place finish was less than expected.

“The car still had too much understeer and I must have overworked the tyres too early on because by half distance they were gone. The late safety car helped cool them down and I was setting my fastest times in the last three laps and we did gain places so it wasn’t all bad. But I know those are the sort of conditions that really suit me so it’s pretty disappointing not to score a decent number of points from that one.”

The 30th and final race of the 2019 BTCC season played out in beautifully sunny early evening conditions for what would turn out to be one of the most dramatic title deciders in the 61 year history of the championship. And while most eyes were understandably on the title protagonists, Thompson was determined to end his year on a high.

From 16th on the grid Thompson made one of his better starts of the year and maintained his position during a frantic opening lap before attacking the dips, crests and undulations of one of the UK’s classic circuits like a man possessed. Within five laps Thompson had passed four drivers and was hassling former champion Matt Neal for 11th place, actually making the pass for position at Surtees on lap 6 only for Neal to retake the place before the lap was over.

However a nudge from another driver that forced Thompson briefly on to the grass and the fading grip from his tyres saw the #19 machine slip back to 17th place with three laps to go. However a successful battle with former teammate Mike Bushell and then Dan Cammish’s heart-breaking retirement from the race on the penultimate lap lifted Thompson into 15th place for a single championship point.

“That was the hardest I have worked for one point in my career, but it was worth it,” concluded Thompson who recorded a total of 10 point scoring finishes during the season and finished 22nd in the BTCC Drivers Championship. “I managed to take every chance that came my way and my scrap with Matt [Neal] was one of the best of the year for me.

“I knew I was using a lot of the tyre but I wasn’t going to finish the season without leaving everything out there although I could have done without getting a tap from Bushell which cost me a few places. He came and said sorry afterwards and he was my teammate last year so I know it was nothing intentional and it is just a shame that I didn’t have much of the tyre left to fight back in the last few laps. But things worked out for me elsewhere and at least I can say I finished the season in the points.”

In addition to his 22nd place in the main drivers’ championship, Thompson claimed 10th place in the Independent Drivers’ standings, 11th in the Dunlop Forever Forward rankings and 3rd in the Jack Sears Trophy with a total of 1 JST win, a trio of second place finishes and nine third place efforts.

“We have had plenty of ups and downs this year,” stated Thompson, who scored main championship points in six of the ten race weekends. “It is fair to say there have probably been more downs than we would have liked but I’ve got two top ten finishes, loads more experience under my belt and the hunger to come back next year and get on the podium.

“I’ve got to thank my Team HARD crew for sticking with me when things weren’t going as well as we wanted them to and all the people who have sponsored us this year. Without them I wouldn’t be racing and so I hope we have made them happy and of course my family who go through every emotion with me. Bring on 2020.”