Thompson only 28th but ‘in the mix’ after Oulton qualifying. 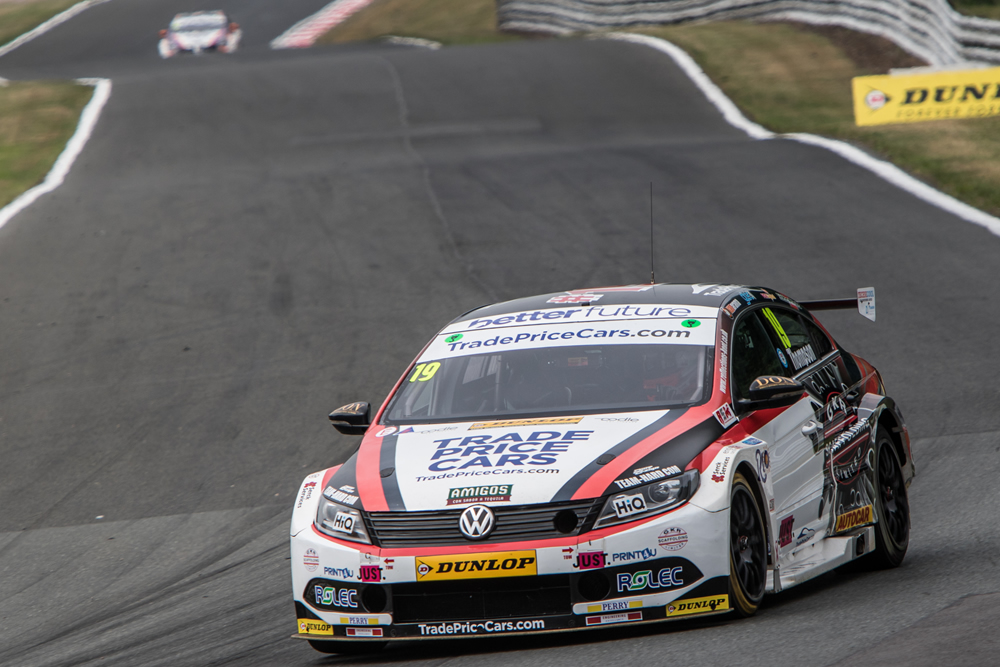 Dunlop MSA British Touring Car Championship rookie Bobby Thompson may only have qualified 28th for tomorrow’s tenth round of the ultra-competitive 2018 championship at Oulton Park but with the narrow, fast, tree-lined track offering the 32-strong grid more challenges than most, the fact that Thompson is a scant 0.3-seconds away from the ninth row means the reigning VW Cup Series Champion is far from downbeat.

“There is no point pretending that 28th is where both I and the team want to be because it isn’t,” says the 21 year-old Hornchurch based driver. “And it might be hard for outsiders to understand but we are knocking on the door of the points and if I had been able to put my three fastest sectors into the same lap then we would be in the top 20.”

Thompson and his #19 GKR Scaffolding Team HARD with Trade Price Cars squad began the day battling brake issues but with those solved, the current BRDC Rising Star leapt up the order in the second free practice session. With a few more tweaks to the brake bias ahead of the 30-minute qualifying session Bobby knew he could attack the particularly daunting parts of the undulating 2.26-mile Island variant of the Cheshire venue harder than ever.

“Even though Oulton can be a bit intimidating I really love the fast parts as you can gain a lot of time on others if they are even a tiny bit cautious,” continued Thompson, whose first qualifying run beat his best time from practice and saw him sitting between 22nd and 25th on the timing screens. “With 32 of us all going for quick laps traffic is always going to be a problem and as a rookie I have to be extra careful not to get the blame for accidentally spoiling one of the quicker guys laps. But even though the final position isn’t what we hoped for, the feeling I had in the car is that it is the best it has felt all day.”

As the qualifying session reached its climax and with Thompson on his second and final flying run, the #19 machine tipped the timing beam in a best time of 1:26.957 on his penultimate lap, achieving his goal of getting below 1.27.00 on a day where jus 1.2secs separated the top 28.

Unfortunately for Thompson many other drivers improved as well in the final moments for although his own time improved, the #19 slipped to 28th as the chequered flag fell, albeit a mere 1.1-secs shy of Matt Simpson’s maiden BTCC pole winning time.

“We are in the mix for points and that is what matters,” concluded Thompson. “And although Oulton is hard to pass round there ae usually plenty of incidents and car issues so I am hoping to pass a few cars in the early stages and then just pick up the pieces as others get into trouble.”

Bobby now faces a trio of 15-lap races on Sunday and will be looking at scoring his first championship point, improving on his current position of tenth in the Jack Sears Trophy standings and moving into the top ten in the Dunlop ‘Forever Forward’ awards for the driver who gains the most place over his starting position during the course of the day.

For those who can’t make it. All three BTCC races will be shown live on ITV4 at the times shown below. And for those fans who are going to cheer on the #19 in person, make sure to grab your free copy of The Bobster newspaper and a complimentary can of Rio Soft Drink during the pit lane walkabout and drivers autograph session.