Thompson makes his point at Croft 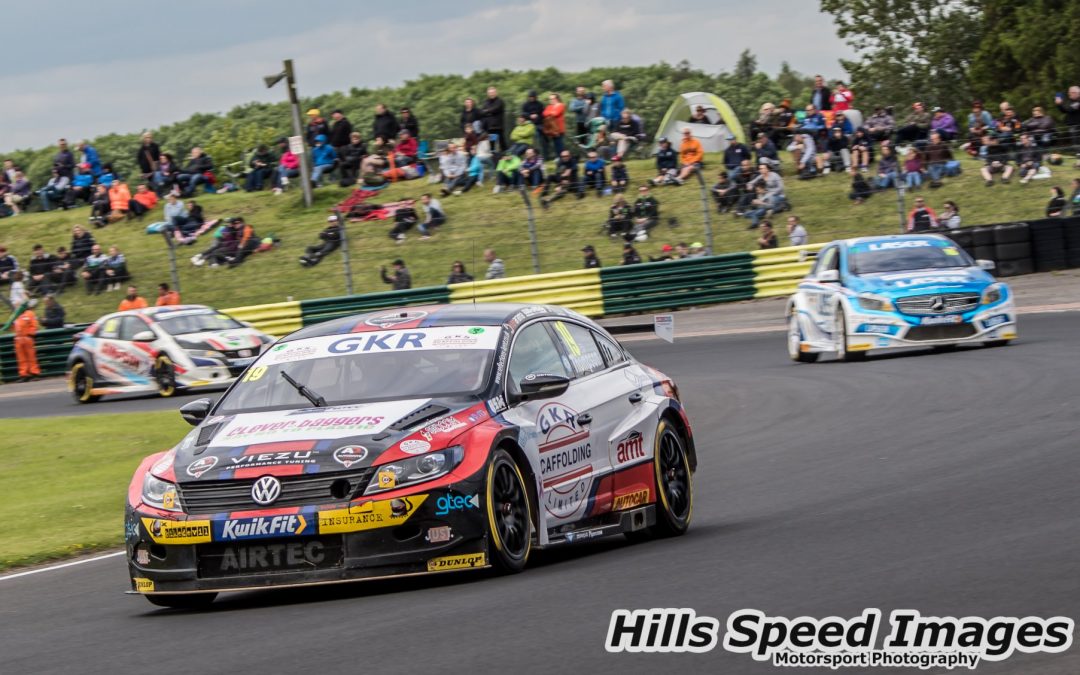 The 22 year-old Hornchurch based driver was heading towards another frustrating weekend in Britain’s premier domestic race series when, for the first time since the season opening weekend at Brands Hatch, the weather Gods smiled on him before the start of the third and final 15-lap race of the day.

“It feels good to come away from here with some more points in the bag,” said the 2017 VW Cup Series Champion. “But this weekend definitely highlighted the fact that while we have an excellent car in the wet, we have some issues in the dry that need to be resolved before we get to Oulton Park.

Thompson lapped on the fringes of the top 20 throughout Saturday morning’s two free practice sessions in his #19 GKR Scaffolding with Autobrite Direct VW CC run by Team HARD and while the resurfacing work carried out by the circuit over the winter had transformed the challenging 2.13-mile circuit into a much quicker proposition that years previously, Thompson discovered that whereas he could previously exploit the gnarled, occasionally grip-less and tyre-chewing tarmac, its consistent and highly grippy replacement offered no such advantage.

Further adding to Thompson’s woes was one of the BTCC’s most disjointed qualifying sessions of all time on Saturday afternoon, which saw the red flags flying a record breaking five times, including once an incident in the ultra-fast Jim Clark Esses that left one of the menacing Recitel barriers lying directly in the path of Thompson’s #19 machine.

Although the resulting contact left the front end of Thompson’s car looking decidedly second hand, as the issue was not caused by Thompson he didn’t lose his fastest lap, which was just as well because with the continual stoppages, he was only able to set one flying lap during the session which resulted in a disappointing 24th place on the grid for the first race on Sunday.

“All week the forecasters had been predicting rain for race day and when it poured down all day on Friday as we were setting up, I was feeling pretty confident for race day,” added the current BRDC Rising Star. “But on Sunday morning everything was dry and while that is great for the BTCC fans, it wasn’t the weather we were looking for.”

Thompson’s troubles began early in race one when, after a cautious start he found that his brake pedal wasn’t as responsive as he needed it to be resulting in a trouser staining moment at the end of the main straight on the opening lap.

“I didn’t make the best of starts and lost a few places but then when I went to brake for Tower Bend on lap one the brake pedal went long and I almost piled into the back of about half a dozen cars. Luckily I was able to run out a little wide and avoid everyone but I knew that something wasn’t right.”

Settling in to the race behind joint championship leader Rory Butcher, Thompson began driving around his issue and moved in to 25th position when the safety car was deployed to clear Rob Collard’s stranded Vauxhall. However as the safety car boards went out Thompson’s brake pedal went to the floor completely and he had no choice but to pull in and retire.

“I could feel the pedal getting longer and longer and I was having to lift off the throttle earlier and earlier just to make sure I didn’t collect anyone in front of me. But then all of a sudden there were no brakes at all and I almost ran into the back of Creesy [teammate Michael Crees] and I didn’t fancy explaining that one to [Team HARD boss] Tony G so I had to call it a day.”

That DNF resulted in a 29th place starting slot for race two, which was held under sunny and increasingly warm skies. The conditions also highlighted another issue that Thompson had been battling with over the weekend, a horsepower deficit.

“The cooling duct package on my car is slightly different to what the other Team HARD drivers have got and the difference is about 15bhp. Of course we had to change the front end of the car after Saturday so I knew I would be down on power on race day and race two just magnified that.”

From his lowly grid slot Thompson was able to manoeuvre his way past half a dozen cars in the early stages but then came upon his teammate Carl Boardley and spent the rest of the 15-lap race trying in vain to unlock Boardley’s defence.

“Carl was driving really well and although I could hassle him through the corners, as soon as we got onto the straights he would ease away so without risking a collision there was nothing I could do,” conclude Thompson, who took the chequered flag in 23rd position. “As the season has gone on my lads have identified several issues that we have with the car when conditions are dry and for sure, the bodywork arrangement on the front of the car is something that we will change before the next round.”

Between races two and three the clouds overhead suddenly reappeared and darkened, dumping their contents all over the track during the preceding Porsche Carrera Cup race and leaving the track fairly sodden for the start of the third and final BTCC race of the day.

“When the rain came I won’t lie, I did a little rain dance in the awning as I knew this was my chance to compete on a level playing field with everyone else,” said Thompson who elected to run on the Dunlop wet tyres even though half a dozen drivers felt that the new, porous tarmac would dry up quickly enough to make slicks the better option.

“There were still plenty of puddles on the citing lap and so there was no way I was going to go for slicks,” continued Thompson, whose passage into turn one was made easier by the fact that Dan Rowbottom’s Mercedes, due to start directly in front of him in 21st, had to start from the rear of the grid.

When the lights went out Thompson made an excellent getaway and vaulted into 16th place as the field slithered its way around the opening lap. Although a safety car on lap two gave the slick shod runners a glimmer of hope on a track that was beginning to show signs of a dry line, when racing resumed Thompson was right back onto the rear bumper of Senna Proctor’s Subaru in a scrap for the final championship point.

A pit stop for Stephen Jelley and a penalty for Aiden Moffat moved the #19 into 14th place and although Thompson remained agonisingly close to Proctor and the Honda of Sam Tordoff, he just couldn’t find a way past.

“I made a couple of attempts at getting past Proctor but it took a lot out of the front tyres and then  when I had Tordoff in front of me he was driving a good defensive race and without giving him a nudge to get him out of the way there was chance to make a move stick. The team were keeping me updated about where the guys on slicks were and I had Carl [Boardley] not far behind me and I just didn’t want to risk losing out on a few championship points, especially after the way the first two races had gone.”

Thompson crossed the finish line just inches behind Tordoff to claim two championship points, his first since race three at Brands Hatch and while the points are welcome, Thompson was quick to recognise that there is work to do to make his package a consistent point scoring threat when the rain stays away.

“I obviously pleased to have made it back into the top 15 after a tough couple of rounds and I am really pleased how the car handles in the wet,” says the driver who remains third in the Jack Sears Trophy standings. “But we have to put a lot of work in as a team to make things a bit better in the dry and we will be doing that as soon as the cars get back to the shop before the next round at Oulton.2