Thompson: It’s an honour to be part of Snetterton weekend. 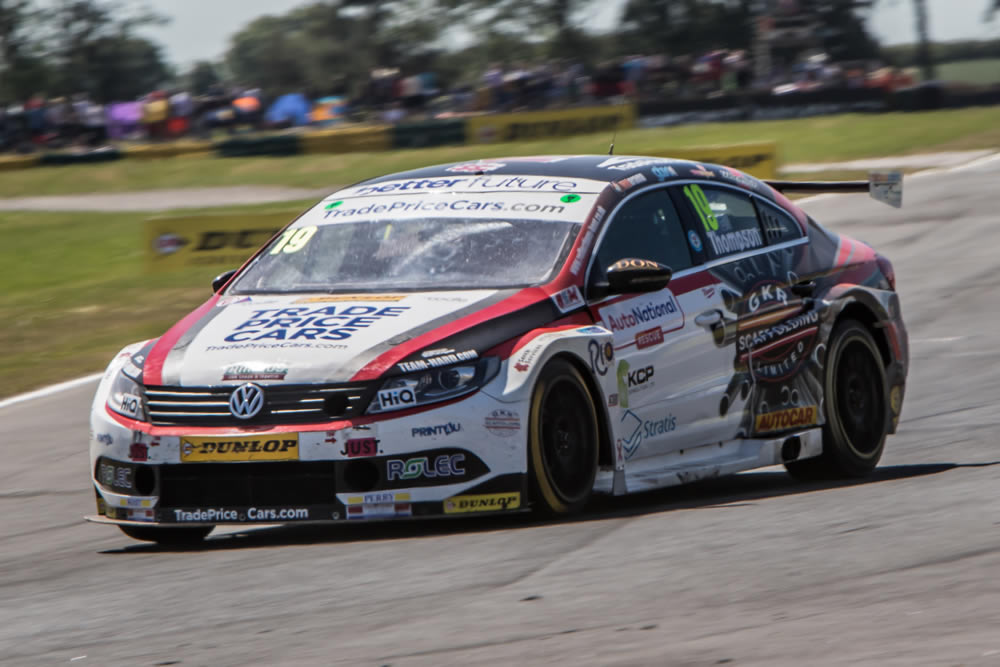 Dunlop MSA British Touring Car Championship rookie Bobby Thompson knows that the first half of his debut season in the UK’s premier domestic championship hasn’t been as successful as he would have liked but the 21 year-old Hornchurch based driver says he is still honoured to be part of the BTCC ahead of one of the most significant race meetings in the 60 year-history of the series this weekend at Snetterton.

“It is such an honour to be a part of this meeting,” says Thompson. “They are going to be talking about it for years to come and I hope I will still be in the BTCC to listen to all those stories in another ten or so years’ time. A lot of people are saying that this is going to be the biggest BTCC meeting since 1996 when they supported the British Grand Prix or the meeting where Matt Neal won £250,000 as the first independent to win a race outright. I wasn’t born when they supported the Formula One and I was too young to remember Matt’s win but all I know is that this is going to be the biggest race meeting of my life.”

Although the reigning VW Cup Series Champion, who celebrates his 22nd birthday on the eve of the three races at the Norfolk venue, has yet to open his championship account with his #19 Team HARD with Trade Price Cars VW CC squad, Thompson says that a positive tyre test at Snetterton during the mid-season break coupled with his charging drive in the final race at Croft, leaves him in a buoyant mood as he heads to the site of his first race win, something he achieved as a series rookie in the VW Cup Series in 2015.

“I can’t deny that my first half a season in the BTCC has been anything but a steep learning curve and after winning the VW Cup Series title last year it is tough knowing that you are going out there every time not fighting for a win but just fighting for a point or even a place in the top 20,” says Thompson. “But the third race at Croft was the first race all year where I could just catch, pass and pull away from anyone around me. I don’t think I have ever driven harder in my life but it felt great and it was good to give my team a real reason to pack up with smiles on their faces.”

The highlight of the BTCC’s spectacular 60th anniversary Snetterton weekend will be Sunday’s double-points 60-mile third race and after Thompson’s stirring drive on worn tyres in boiling conditions at Croft, the fact that Snetterton is expected to be one of the hottest meetings temperature wise in recent memory, has given Thompson an added boost.

“I really feel that we turned a corner at Croft, quite literally as the handling of the car has been a problem all year,” smiled Thompson. “I just changed my approach to driving on worn tyres and it worked. Obviously I know Snetterton really well and while the long race is a step into the unknown for most of us I genuinely think that my #19 GKR Ltd car will be a real contender at the business end of the day.”

Looking back at his maiden VW Cup Series win at Snetterton, Bobby admits that a repeat performance would be one of the biggest upsets in BTCC history, but as a pre-weekend goal it is something he is aiming for.

“I remember arriving at Snetterton on the back of my first podium at Spa but also with a bit of a chip on my shoulder because I should have had two podiums but in the second race the car was something like 100 grams underweight,” added the current BRDC Rising Star who attributed his DQ to a last minute trip to the toilet, something his team still remind him of. “I put it on pole and when the lights went out I got a good start for once and didn’t have to defend much on the opening lap. From then on I just took it lap by lap and everyone kept getting smaller and smaller in my mirrors until they weren’t there anymore.”

Smashing the lap record and winning by nearly seven seconds, Bobby says it took a while to sink in not just that he won but how he won.

“Obviously I was delighted with the win especially as a rookie in the series as it was my first win since my karting days but I was most proud of the lap record I set. I think I was something like seven tenths of a second quicker than anyone else and all season nobody had been able to win by more than a second or two. I think that made everyone in the paddock at the time realise the potential I had.”

Adding even more sunshine to this weekend’s proceedings will be Bobby’s sponsors Rio Soft Drink who will have a major presence in the paddock at Snetterton with an abundance of free drinks to give away, a timely boost on a weekend where temperatures are set to soar.

“Rio have just embraced the BTCC and everything it has to offer,” says Thompson. “They are the brightest company by far in terms of their logos and it is amazing to have such a household name as a partner. The deck chairs they brought to Thruxton will be back and that is a perfect way for fans to have a bit of fun and get an extra bit of ‘sunny’ into their weekend.”