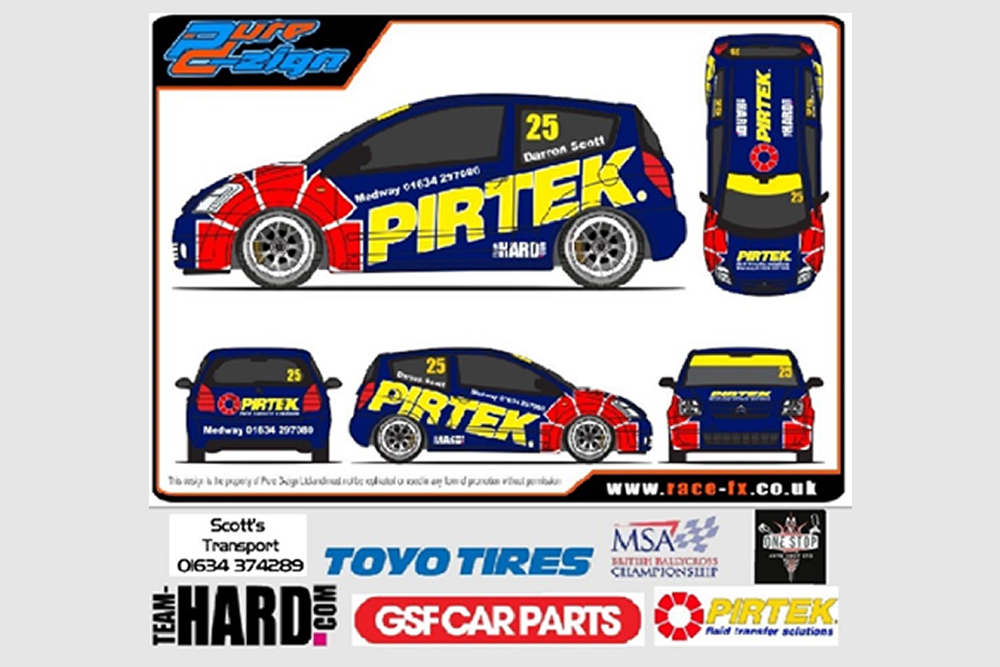 Team HARD. today announce their collaboration with Pirtek Medway and Darren Scott in his 2018 title assault in the MSA British Rallycross Super 1600.

Pirtek backed racer Darren Scott is going to head into the 2018 season branding the famous Team HARD. logo on his Citroen C2. The Kent based racer said on the on his 2017 season “We started off very slow with some minor problems as the car was new and we was still getting to grips with it but as the year progressed, with alterations made to the car as our experience grew, we started to see a lot of podium finishes that also included a few wins”. He went onto talk about the 2018 season “My intentions for this season is to push HARD and grab the British championship, but there are some excellent drivers out there so it’s not going to be easy. I would also like to go out and compete in some of the Belgium championship rounds which I’m still organising with them at the moment”. Darren concluded by talking about the backing of Pirtek Medway and the collaboration with Team HARD. “Pirtek medway have been a great help from the start to me, I pretty much leave the car prep to them as I know it gets done properly and without them I wouldn’t be where I am now. The help I have from them when we go to circuits is also great and Darren my spotter gets it right every time and not forgetting Brett and Danny that also work HARD. On that note Team HARD have been a great support with a range of things from geometry to suspension setup and my fibreglass repairs that need doing and lots of advice on things that will help me when racing. I know that the Pirtek boys and the team have a great working relationship and it is a pleasure to be part of that”.

Darren Edenborough of Medway Pirtek spoke of the involvement they have “We have been supporting Darren Scott in the British rallycross in the super 1600 series, with good results towards the back end of the season finishing in 2nd place in the championship which was a fantastic result”. He explained how they got involved “We have known Darren Scott since about 2002, we got to know him through him bringing his truck in for hydraulic repairs and used to talk a lot about the rallycross, this started the ball rolling about us trying to help him out at the events after our open day event for charity.” Darren went onto say “Our involvement with the car is that we keep the car at the depot, carry out all repairs and race prep to the car before and after races along with Darren Scott. We also give full support at race weekends with all mechanical work required and to do whatever is needed to get the car out racing plus keeping in radio contact with Darren during the race to let him know what is going on.”

Team HARD. owner and principle commented on the arrangement “Following on from a mutually beneficial introduction over the last couple of years, through our joint passion for motorsport has brought us not only a great working relationship, but also brought the team some good friends. In an industry that is usually so closed we are determined to offer our help and assistance in every way possible and with this collaboration it sees us dipping our toe into the fast-growing world of Rallycross”. Tony went onto thank certain people “Darren and his team from Pirtek are great ambassadors for their brand and the relationship he has struck up with one of my number 1 engineers Peter is the reason we have agreed to help and hopefully this will see Darren Scott taking the British title in 2018”.