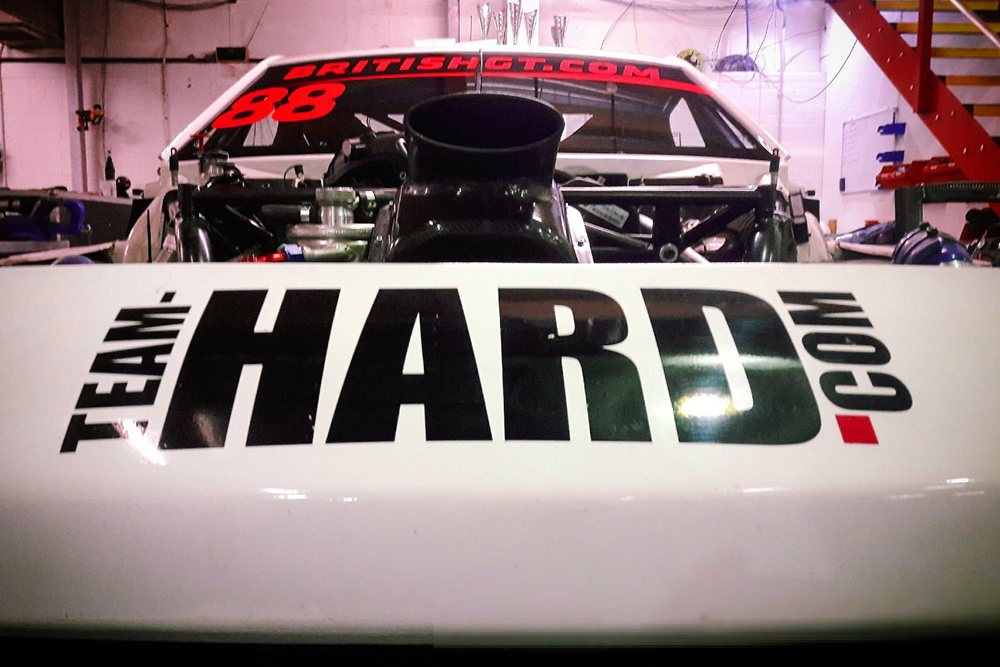 Team HARD, having previously announced that it will enter two Ginetta G55 GT4s in the 2018 British GT Championship with a Silver and a Pro/Am pairing, can now reveal its driver line-ups for the forthcoming season.

In the #88 Ginetta G55 GT4, established Team HARD driver Ben Wallace will be joined by Nick Worm in a Silver pairing.

Ben Wallace begins his first full season in the Ginetta G55 GT4 after a busy 2017 where he finished third in the VAG Trophy and competed in three rounds of the British GT Championship. Young German driver Nick Worm joins Team HARD following his debut season in 2017, competing in the BRDC British Formula 3 Championship.

In the #34 Pro/Am entry Anna Walewska joins the team to be partnered with Callum Hawkins-Row.

2018 will be Anna Walewska’s third season in the British GT Championship and her first with Team HARD. In 2016 Anna finished third in the GT4 Pro Am category. Callum Hawkins-Row joined Team HARD in 2015 as part of its highly successful driver development programme. Alongside Angus Dudley, Callum drove the team’s Ginetta G55 GT4 to third place in the 2017 Britcar Endurance Championship in the GT4 category and fifth place overall, beating some GT3 entries in doing so.

Team Principal Tony Gilham: “We’re very excited about this season. We had a great debut in 2016 culminating in the team championship. 2017 wasn’t the best year for us so we’re looking to come back this year with a very strong line-up. We’ve got what we consider to be both strong Silver and Pro-Am pairings so we’re going to go for both titles.”

“We’ve decided to continue with Ginetta as we have a good relationship with them running several cars in Britcar and we’ve got a strong Ginetta GT4 Supercup entry this year but in British GT we’re geared up for, hopefully, a very strong showing.”

Ben Wallace: “I’m really excited and looking forward to the new season. I’m going to learn as much as possible, keep my nose clean and hopefully get some good results out of it. I haven’t had too much experience working with Nick (Worm) but I have high hopes that we’ll have some good races together and get some good results. I’m also looking forward to working with Anna (Walewska) and Callum (Hawkins-Row) as they have some good experience in the Ginetta and we can help each other out.”

Nick Worm: “The British GT Championship is a very prominent series with a lot of strong competitors and enthusiastic fans so it made my decision to join Team HARD, in the end, quite easy. Ben has a lot of experience in GT cars so I guess I have a lot to learn from him. Maybe he can learn something from me from Formula cars which is what this is about – driving and sharing the car – so I hope we’re going to have a successful season together. My objectives for the season are getting to know GT cars in general, to maximise points and get a high position in the championship”

Anna Walewska: “I’ve raced against Team HARD in the British GT Championship so I know what they can do and I know that they can put a competitive car on the grid. A bonus for me is my partner Callum Hawkins-Row, a driver who is pretty rapid. Coupled with my experience of racing Ginettas in the British GT Championship, we’ve covered everything that we need to get a good result. I want to be challenging for the front – that’s where the goal is set – and I don’t think that is unreasonable with the paring and the car we’re in this year. I will be carrying University of Bolton branding on the car but it will be re-branded as the National Centre of Motorsport Engineering so it’ll be quite exciting to launch NCME for the year.”

Callum Hawkins-Row: “I’m over the moon finalising my 2018 season and I’m grateful for the faith that Tony Gilham put in me from BRSCC Fiesta Juniors, into Britcar and now into the British GT Championship. I think I’ve gone some way to justify Tony’s faith in me. British GT is a critical step for me to make if I want to pursue my career as a professional driver. With Anna, it’s going to be a really solid partnership. I feel that I’m going to learn a lot from her and I feel that I have things that she can learn from me. As a pairing we are going to grow and are going to be very strong. Obviously we want our overall podiums along the way and we want to do the best we can in the overall Championship but that Pro/Am title is calling us!”

Team HARD and all four drivers will be present at the British GT Championship Media Day to be held at Donington Park on March 8.