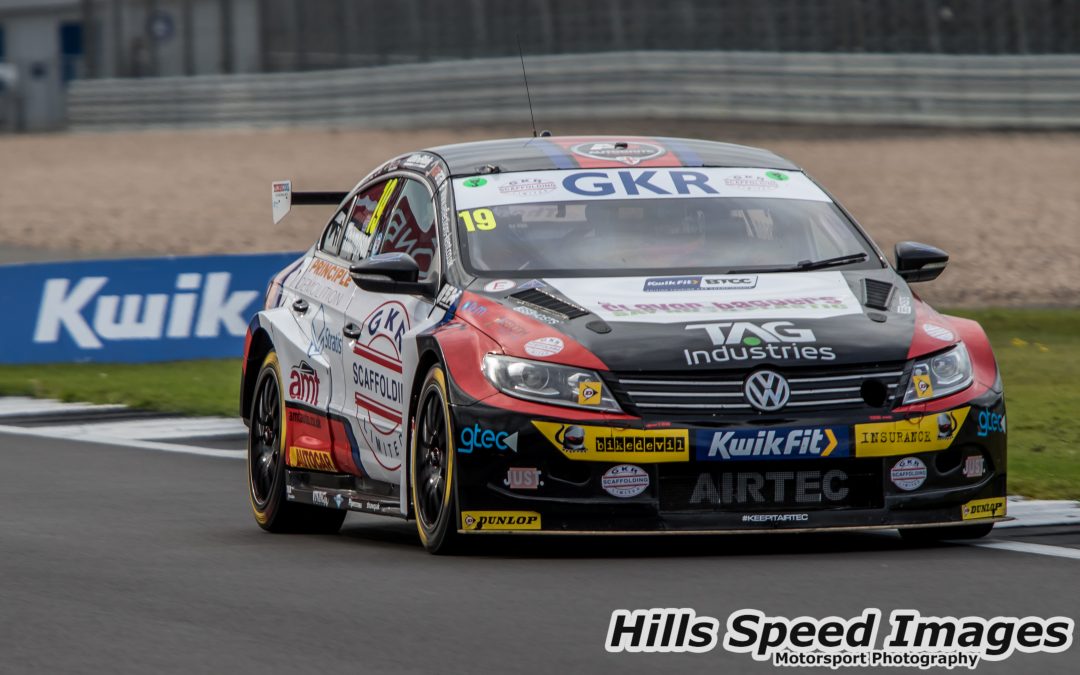 The penultimate race weekend of the 2019 season will go down as one of the most intense, chaotic and action packed events in the rich 61 year history of Britain’s most popular domestic series as afternoon storms turned rounds 26 and 27 of the 30 race season into a rain swept lottery at the 1.64-mile Northamptonshire venue that is home to the British Racing Drivers Club.

On the heels of a tough weekend at Knockhill, the 23 year-old Hornchurch based driver and his #19 GKR Scaffolding with Autobrite Direct Team HARD outfit knew that getting back into the points was a must at a track where slipstreaming is key and where the venerable VW CC’s still had a chance to compete against the latest BTCC machinery.

However a recurring mechanical issue during Saturday’s two practice sessions meant that the 2017 VW Cup Series Champion couldn’t unlock the full potential of his machine with chronic understeer making it difficult to attack a circuit where the average lap speed sits at well over 100mph.

“Qualifying was disappointing,” said Thompson, who is one of the current crop of BRDC Rising Stars. “We couldn’t get the balance of the car right and I was understeering into every corner which made it harder to get a good tow down the straights. So although 20th place isn’t where we want to be, the fact that I am less than half a second away from pole position shows that if we get the handling sorted, we can be right up there tomorrow.”

With Thompson starting on the outside of the tenth row of the grid for Sunday morning’s opening 22 lap race, held in damp but drying conditions, a poor getaway wasn’t the ideal beginning to a race that also saw the driver known throughout the paddock as Bobster, saddled with the less than optimal soft tyre and when the 30-strong field flashed across the line to compete the opening lap, the #19 VW was back in 24th.

But as has been the case in race conditions throughout the last two BTCC seasons, Thompson proved once more that he is an expert at extracting the maximum out of his car regardless of tyres, set up and track conditions as he quickly began picking off his rivals. By lap eight he was back up to 20th and with ten laps remaining he was sitting 18th and catching a pack squabbling over 12th place.

Sadly for Thompson his fighting drive came to an end on lap 16 when, after a collision ahead of him between Ollie Jackson and Rory Butcher at Luffield caused a concertina effect, Thompson was rudely spat out of the way coming out of the final corner into the barriers, leaving him an unjust 27th.

“I had passed Aiden Moffatt a few laps earlier and I knew he was still right behind me so when everyone slowed down to avoid the crash ahead of me, Aiden just kept his foot on the gas and around I went. It was just really unnecessary as we could have both come out of that with some points but instead I’ve got a damaged car and I’m starting at the back for the next race.”

Redemption was to come in the form of Mother Nature in race two, as spots of rain that began on lap 9, by which time Thompson had already climbed from 27th to 20th, turned into a substantial shower. With the entire field on slicks and in conditions that Thompson revels in, the #19 machine was suddenly one of the quickest cars on track.

Thompson took little time getting into the points and when the safety car came out on lap 15, he was up to 15th. Five laps remained when the green flag waved again and Thompson quickly dispatched his teammate Carl Boardley for 13th and then Senna Proctor for 12th. However just as he was looking to make more progress the red flags came out to stop the race and on the run to the line the returning Michael Caine edged Thompson back to 13th.

“The championship has obviously got to put safety first and the track was certainly getting very wet but I would have liked to have run the full race distance,” commented Thompson, who narrowly missed out a pace in the reverse grid draw. “But to pass half the field and score some points from where we started is a major boost for us and hopefully it will stay wet for the rest of the day.”

Thompson didn’t quite get his wish and when the cars lined up for the third and final race of the day the track was dry but with ominous clouds overhead. The first spots of rain started to fall on the parade lap and Thompson’s teammate Jack Goof took the gamble to pit for wet tyres as the field lined up for the start.

As the lights went out Thompson and 28 others tiptoed their way around the opening lap with grip levels already beginning to deteriorate and the #19 machine completed the opening lap in 16th place. But with Thompson in his element that soon became 13th and had an audacious double outside pass on title contenders Colin Turkington and Andrew Jordan come off without Thompson running wide on the exit of Copse Corner, he would have been sitting in 10th place when the safety car came out to retrieve a car out of the gravel.

Now there was a decision to make for as the track conditions worsened, several drivers peeled in to change to wets on the first of three safety car laps with several more doing likewise at the end of the second lap. By the time Thompson got the call to pit for wets the safety car lights were out and despite some swift work from the Team HARD crew, a frustrated Thompson returned to the track in 24th place, 55-seconds behind the leaders with 19 laps remaining.

What followed was one of the unsung drives of a day that was full of shocks and surprises. With about a dozen cars still on slicks and everyone else on wets, Thompson fought back from nearly a lap down to pass a dozen cars and gain nearly 20 seconds on the race leader by the time the chequered flag came out.

Often among the fastest cars on track Thompson would take the chequered flag in 10th place, his best result since the opening race of the year at the Brands Hatch Indy circuit and while there was obvious elation at the site of Goff claiming Team HARD’s maiden BTCC race win there was also the knowledge that an earlier pit stop to change onto wets could have seen Thompson join his teammate on the podium.

“That was just a crazy race, concluded Thompson, who remains third in the Jack Sears Trophy standings with just three races to go. “I just pushed as hard as I could every corner of every lap following the restart. At one point I thought there was no way a points finish was possible but we managed to claw it back. I’m delighted for Jack and the whole team. We have worked so hard over the last two years together and it is great to see Team HARD on the top step at last.

“We had some extra support this weekend from Principle Demolition and Modern Classics Car Club and it was certainly an introduction they will never forget.”