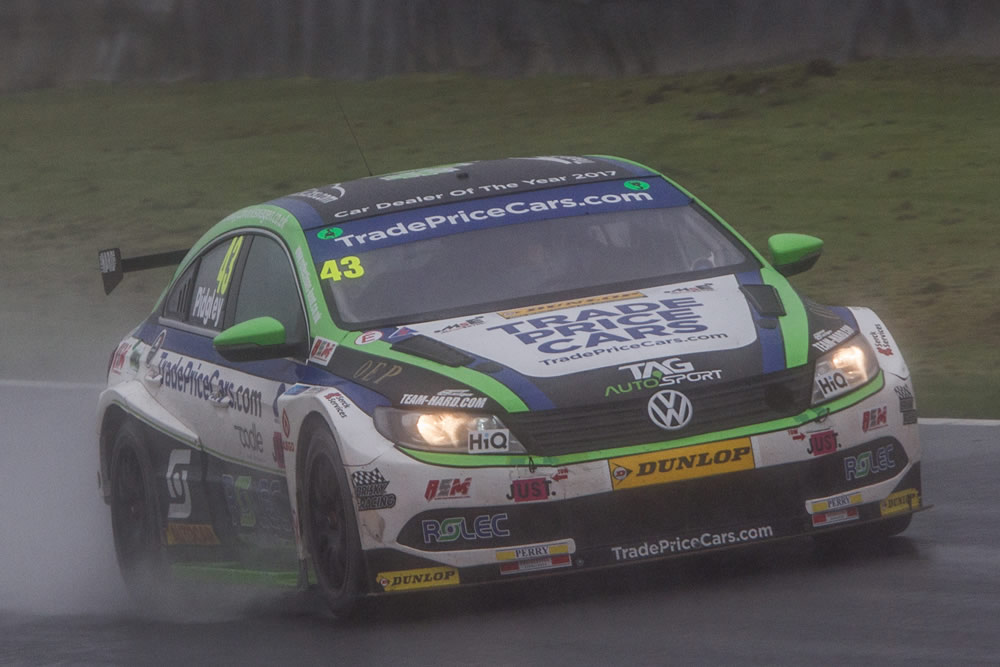 Dunlop MSA British Touring Car Championship rookie Ollie Pidgley made another step forward in the UK’s premier motor racing category at a rain-swept Knockhill in Scotland over the weekend, 25th/26th August, where the Volkswagen CC racer encountered another series of fresh challenges.

Making good progress through the dry free practice sessions on Saturday, where he had to pretty much learn the Fife circuit from scratch having only competed there once previously in a Formula 4 single-seater back in 2015, the Downton driver headed into raceday in confident mood.

Heavy and persistent rain on Sunday, though, delivered a fresh test for Pidgley who celebrated his 21st birthday over the weekend. With a highlight finish of 21st place in round 23, the Trade Price Cars with Team Brisky Racing driver hoped for more in round 24 later in the day, especially starting the race just outside the top 20, but unfortunate contact on lap two ended those aims.

“I’m not sure what happened entirely”, explained Pidgley after race three, “[Matt] Simpson went sideways at the hairpin and so, in avoidance, I went to the outside but Bobby [Thompson] outbraked himself and made contact with my wheel, which was on full lock, so it broke the tow link.

“It’s quite frustrating it happened in that race as it was the highest I’ve started in touring cars, and other than [Jason] Plato in his rear-wheel drive getting past me, I managed to stay with the others on the first couple of laps and things were going well. It’s a shame, but there are lots of positives.”

Making significant gains during the two free practice sessions on Saturday, finding a full 1.1 seconds between the two runs, in qualifying Pidgley again made steps forward and ended up with the 30th fastest time – less than a couple of seconds way from pole position.

Due to the arrival of a significant amount of rain on Sunday, the challenge for Pidgley was ratcheted up a notch with no prior experience of those conditions at Knockhill in his BTCC car. At the start of race one, though, he made no mistakes and moved ahead of Carl Boardley’s sister Volkswagen CC into 29th place at the end of lap three when Boardley went wide and off at the hairpin.

Taking another position soon after when Daniel Lloyd careered off the circuit, Pidgley then moved into 27th place on lap 11 when Honda racers Matt Neal and Matt Simpson tangled. Although slipping back behind the recovering Lloyd early in the second half of the race, contact between podium contenders Stephen Jelley and Colin Turkington elevated Pidgley back into 27th before the finish.

As the drivers and teams prepared for race two, the weather had only worsened with treacherous conditions awaiting the start of round 23. Even with the extremely limited visibility in the pack at the rear of the field, though, Pidgley made some impressive gains in the red-flag shortened encounter.

Although dropped back to 30th place from 27th at the start, following an early Safety Car period between laps two and seven the Volkswagen CC racer began to make progress. As several rivals came to grief in the conditions, Pidgley acclimatised impressively and he steadily moved through into 24th position before the Safety Car made its second appearance on lap 13.

Following the re-start on lap 19, the BTCC rookie was nudged back to 25th by Simpson but Pidgley did move back up into 24th on lap 20 before the red flags were shown, and a race result declared, after a collision with the barriers for Sam Smelt. When the top two finishers were then excluded due to technical infringements, Pidgley moved up into a best yet 21st spot.

Even though rain ceased later in the afternoon, the third and final contest still took place on a wet track and from 21st on the grid – surrounded by a number of very experienced touring car drivers who had encountered misfortune in the previous encounter – Pidgley put together a sensible start.

Ending the opening lap in 25th position but well in touch with the pack ahead, at the end of the second tour he was forced to pit with the broken tow link after contact at the hairpin. Thanks to great work from the Trade Price Cars with Team Brisky Racing pit crew, Pidgley was able to rejoin the race and ended 26th of the cars still running, albeit eight laps down, to gain vital extra experience.

“I’ve only ever been to Knockhill once before, and that was in F4, so everything was pretty new to be honest”, said the Old English Properties and MSP Capital supported racer, “On Saturday we kept making progress, getting used to the car and the track and only using old tyres. All of the targets we set ourselves we kept hitting, so it was a really productive day.

“The rain on Sunday, though, made everything more of a challenge – I’ve never seen anything like those conditions to be fair, the wipers on a touring car aren’t the best and the water doesn’t run off the plastic windscreens like it does on a regular road car. It’s the same for everyone, obviously, but visibility was pretty tough.”

Next up for Pidgley and Trade Price Cars with Team Brisky Racing will be penultimate race meeting of the 2018 BTCC season over the weekend 15th/16th September, at Silverstone National Circuit in Northamptonshire.

“Silverstone is one of the tracks I’ve done most at before, in Clios and MINI Challenge, so I’m really looking forward to being there in a touring car”, commented Pidgley, “I’m confident it’ll be a good weekend and if it’s dry I think we have a great chance to make some more steps forward, plus it should be a good track for our Volkswagen.”