Quinn returns to the top in GT Cup debut 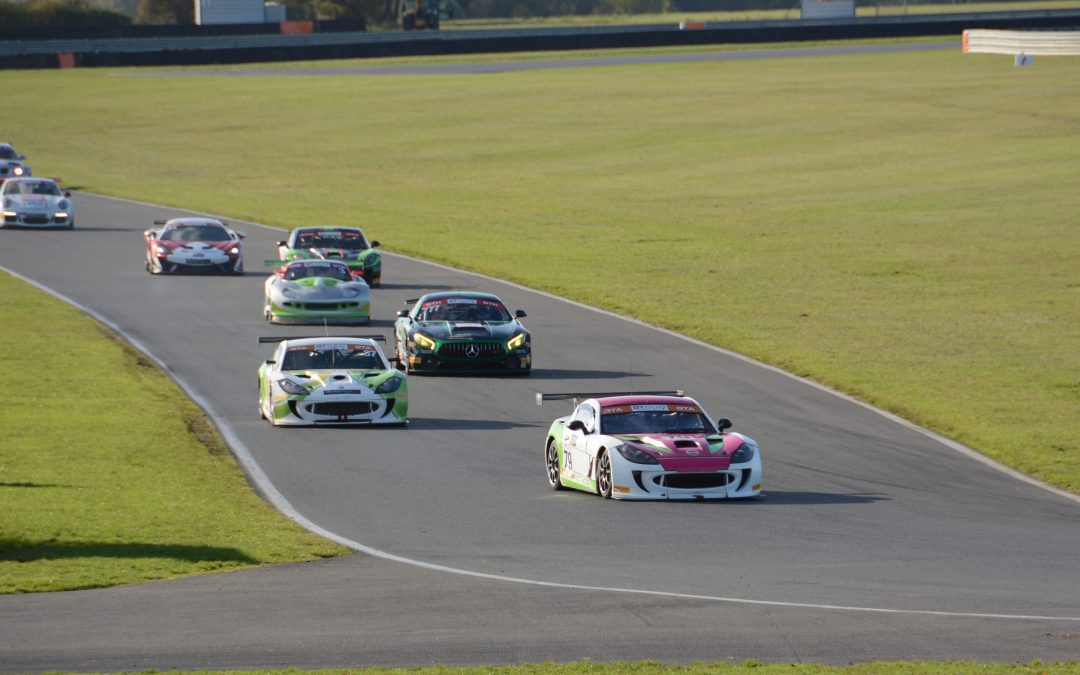 Snetterton, Norwich, UK – Tuesday 29th October 2019: Dunboyne’s Niall Quinn made a sensational return to racing in Snetterton last weekend following a three year spell on the side-lines, to come away with pair of podium finishes that included an overall win in what was the former championship winning driver’s first endurance race of his career.

In a last minute deal with top British outfit Team HARD. Quinn was using the opportunity to evaluate his options ahead of a planned full return to racing in 2020. Enjoying many years of success in Karting and single seater racing around the world, taking on the final round of the 2019 GT Cup Championship would be his first taste of true endurance racing, something he was relishing.

With limited mileage in advance of the weekend itself, it was certainly in at the deep end for the former Motorsport Ireland Young Racing Driver of the year. Saturday’s track conditions were certainly far from ideal for Quinn who was set with the task of getting to grips with the hugely popular and successful Ginetta G55 on a soaking wet Snetterton circuit. Added to this, steering rack failure in qualifying would limit his running to a single flying lap. However, that one lap would amazingly place him in second on the grid for the opening sprint race of the weekend. Sadly however, unable to ready the car in time for the race, Quinn was forced to sit on the side-lines and lament what could have been.

Picking himself up for the second race of the day, this time the much longer 50 minute encounter, Niall had it all to do starting from the rear of the field. As the lights went out, Quinn set off on a charge that would seem him move past over 10 cars on track, including a superb move around the outside of the challenging Coram corner to pass the newly crowned GT Cup champions in the McLaren. As is often the case in endurance racing, an ill-timed Safety Car would drop the Team HARD. driver down a lap from the main pack, meaning Niall would have to settle for ninth overall and second in the GTA class.

Joined by Ginetta GT4 Supercup & GT Cup regular, Sam Randon on Sunday, Quinn was looking forward to the chance of working with a co-driver on a now dry Norwich circuit. Teaming up for Sunday afternoon’s 50-minute endurance race, Randon started the race and put in a superb display to dive into the pits from the class lead. Handing the car over to Niall, he matched his GTA class rivals pace to maintain their 10 second advantage at the head of the class and secured a superb victory to complete a very positive weekend.

Niall Quinn – #79 Team HARD. Ginetta G55:
“I am really happy with how the weekend turned out. It was a real shame to miss the sprint race due to the steering rack failure, but I would be lying if I said I didn’t enjoy coming from the back in the Endurance race! It was a real challenge making progress through the field of cars with different strengths and weaknesses and figuring out where the Ginetta could do the job and get by. Sunday was another great day, Sam did a fantastic job in the first stint and I’m delighted I could finish the job and get a win for the team. Thanks to Tony and all of Team HARD. for the opportunity.”

Tony Gilham – Managing Director, Team HARD.
“It was great to have Niall onboard this weekend to help us seal the GTA class championship in our debut GT Cup season! You really couldn’t tell that Niall had spent three years away from racing as he got on the pace from the get go. His wealth of experience was valuable over the course of the weekend which saw beautiful sunshine and torrential rain. What a great debut for Niall, a class win in the final race of the season. Things are looking good for a full time return in 2020!”