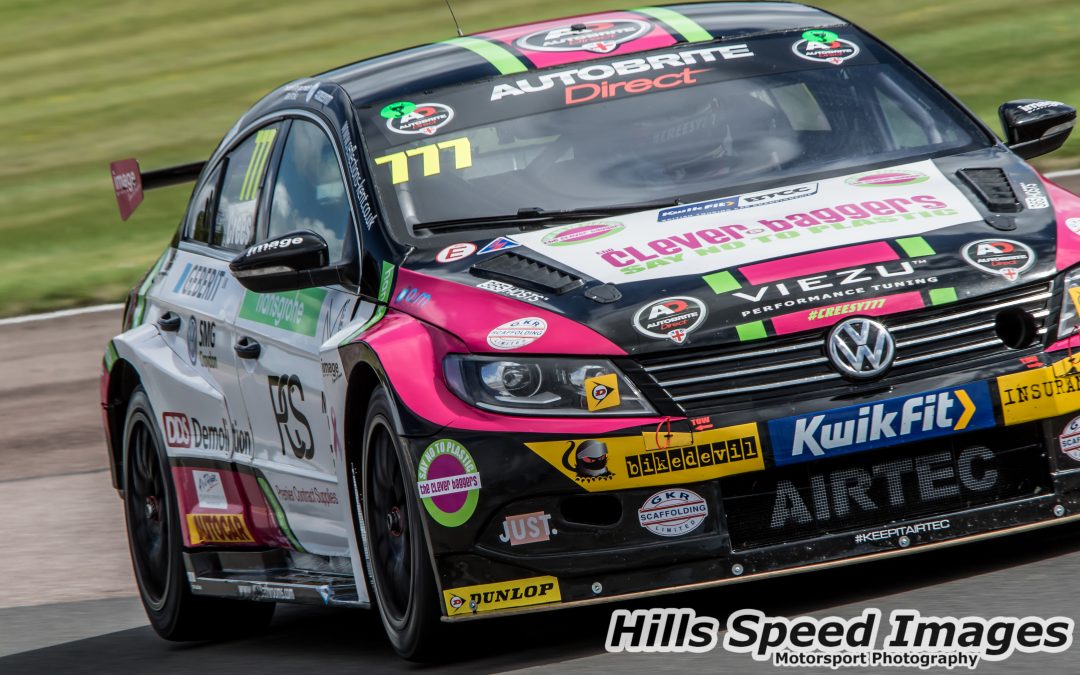 Returning to ultra-fast circuit for the second time this season, the Team HARD driver descended on the Hampshire venue confident of building on the lessons that were learnt in May.

After fine-tuning the set-up of his Volkswagen CC in Saturday’s two free practice sessions, the 35-year-old enjoyed a competitive qualifying showing as he made further improvements. Setting a best time of 1:17.837, he ended what was a frenetic 30-minute session in 27th.

Crees’ drive in the opening encounter saw him in the thick of the action towards the rear of the field as he scrapped to break into the top 20 in his Burlington Bathrooms and Premier Contract Supplies supported machine.

Moving up the order into 23rd in the early stages, the reigning Ginetta GT4 SuperCup Am Class champion showcased his driving prowess, both attacking and defending, to hold the position at the chequered flag.

Race two saw the Kent based racer enjoy another trouble-free run in front of a bumper trackside crowd as he once again underlined his credentials with a competitive drive to 25th place.

The third and final encounter of the weekend proved to be a race of two halves as the dry conditions of early on made way for torrential rain to batter the circuit in the latter stages.

Using all of the experience that he has gained as the season has progressed, Crees kept himself in the midst of the battle outside the top 20 and brought the car home to record a second 25th place finish.

Michael Crees: “I’m really happy with how the weekend went, we’ve made some real improvements. On paper the results may not seem that great but we have done a lot of work behind the scenes and got another three finishes, and more experience, under our belts.

“I’ve been the quickest I have been all season and I’ve really felt my race craft has come on too. I’ve been in the fight, attacking and defending, and it feels like things are really building now.

“We go up to Knockhill next, which is a circuit I love. We tested there in pre-season so that is a confidence boost. I’d love to get another point before the season is out but breaking into that top 20 on a consistent basis is the first aim – hopefully we can do it next time out.”

Next up for the Geberit UK, Hansgrohe, DPC Group, DDS Demolition, Merlyn Showering, SMG Croydon, MVC Events, MJ Plumbing and Imperial Render backed driver is a trip north of the border to Knockhill in Scotland for Rounds 22, 23 and 24 of the 2019 Kwik Fit British Touring Car Championship season.

Article by: Next Level Motorsport