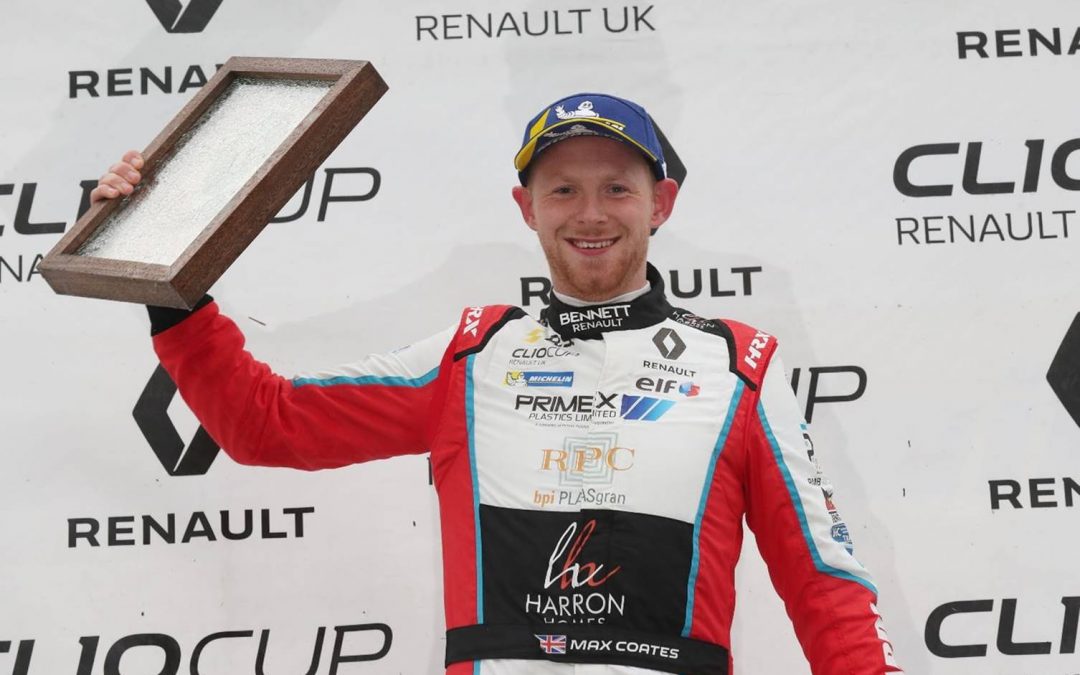 Max Coates got his 2019 Renault UK Clio Cup challenge off to the best start possible taking the maximum points tally available at the Brands Hatch Indy circuit in Kent, the first driver to do so in four years.

Pre-event testing for the opening round of the championship went well for Coates in his Team HARD. Racing car as he topped the timesheets, just half a tenth from the fastest recorded lap of the 1.2-mile circuit in a Renault Clio Cup car.

Whilst testing had been held in near perfect dry conditions qualifying was damp and cold, meaning the fastest times didn’t trouble the lap record. Still, Coates’ Primex Plastics backed car took pole position for both races, the top three separated by only one tenth of a second.

The opening race of the season was held in wet conditions and Coates took the early lead. He was challenged at the end of lap one but held on around the outside of Paddock Hill bend and began to pull away from the field. With a two second gap at mid-race distance he was sitting comfortably at the front until a late race charge from Jack Young, who qualified second for both races, closed the gap to just 0.351s at the chequered flag. Significantly the RPC bpi PLASgran sponsored driver set the fastest lap of the race and lead every lap, adding all three bonus points to his name.

Race two’s start didn’t go as well for the Bennett Renault and RMB Automotive backed car, he instead slotted into 2nd place and waited until mid-race to mount his attack. Closing the gap and applying the pressure on Young, he made a mistake at the final bend and Coates pounced to lead over the line on lap 14, however he couldn’t make the move stick at turn one. Coates, sponsored by Harron Homes and Polydist attempted a move at the last corner but to no avail. Crossing the line in second Coates took a healthy point score from the race along with fastest lap and having lead a lap.

After the race Young was given a 1 second time penalty for breaking safety car regulations which promoted Max to the race two win.

Afterwards an ecstatic Coates said, “This is the best start to the season possible, a double pole, double win and double fastest lap weekend is what we strive for and to achieve it at round one is awesome. That said I’d like to achieve it again this year by winning both races on the road, Jack drove excellently in both and didn’t make it easy for me so I have no doubt we will have close battles in just about every race this season and I hope that my team mates will join me in those battles. A big thanks to all involved in the Team HARD. Clio Cup squad who have put in great efforts to bring a team together for round one, we have created some really strong foundations from which to build on for the remainder of the season.”

With an 11-point lead at the top of the standings the Renault UK Clio Cup now heads to Donington Park in Derbyshire for rounds 3 and 4 on the 27th and 28th April.