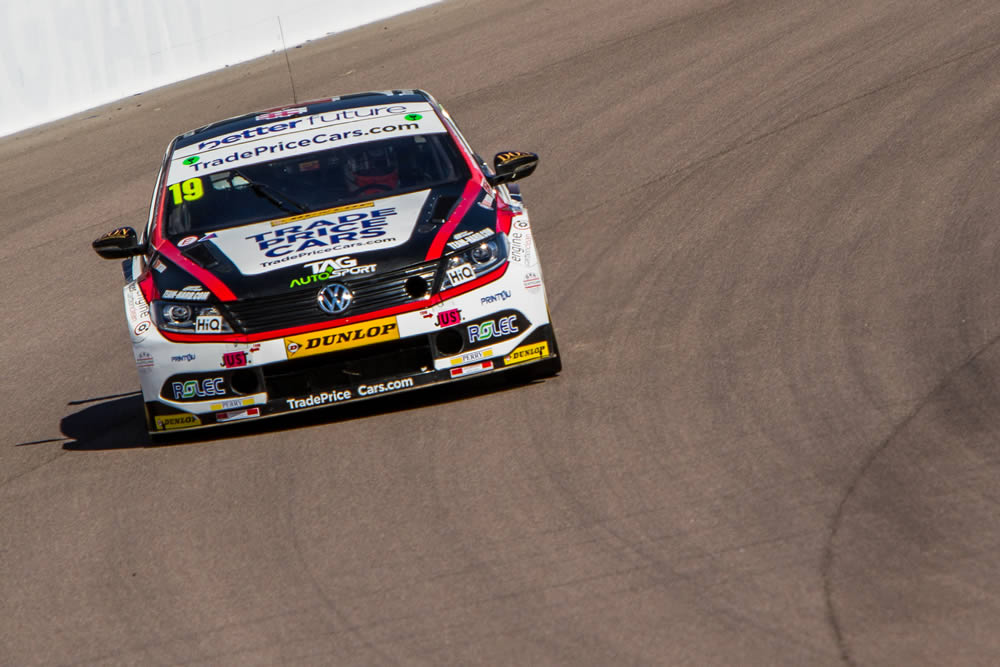 Dunlop MSA British Touring Car Championship rookie Bobby Thompson isn’t getting carried away following his Rockingham Motor Speedway heroics as he prepares to make his first ever visit to Knockhill for rounds 22, 23 and 24 of the 2018 campaign, saying that the undulating 1.24-mile track just north of Edinburgh poses his biggest challenge of the season so far.

Three point scoring efforts from the last five BTCC races including a maiden top ten at Snetterton and a career-best seventh place at Rockingham for the driver of the #19 Team HARD with Trade Price Cars VW CC has made the BTCC paddock sit up and take notice of the 22 year-old Hornchurch based ace.

But despite a stellar reputation in the VW Cup Series resulting in the 2017 title and a place on the BRDC’s Rising Star scheme, Thompson knows that you are only as good as your last race and with the Scottish circuit offering a far different type of challenge than any other he has faced, the driver known throughout the paddock as ‘Bobster’ is approaching the eighth weekend of the BTCC’s record breaking 60th anniversary season with caution.

“We have now had two meetings where the whole Team HARD package has been moving forward,” says Thompson. “A lot of people have made a reference to how Rockingham suited our ‘slippery’ VW’s and that Knockhill won’t suit the car as much and for sure this is definitely a track that favours the RWD cars but the way the team have been developing our cars I don’t think we will be at as much of a disadvantage in Scotland as people think.

“Obviously the circuit is new to me and is a very different style of track to anything else on the BTCC calendar but I genuinely think we can still contend for points here just because of the engineering changes the cars have undergone in the last six weeks or so. I’m not saying that we will be in the top four in qualifying like Mike [Bushell] was at Rockingham but if the weather is a bit mixed then anything is possible.”

Having qualified a career best 18th at Rockingham, Thompson also added how critical finding some clear track in qualifying will be, not to mention the uphill start/finish line that has caught many a driver out over the years.

“I’ve been studying last years’ races at Knockhill and it is definitely a track where you have to be super aggressive on the kerbs and really committed around the whole lap,” concluded Thompson. “Qualifying is going to be massively important and so are the race starts. I haven’t always done a great job of putting myself in the right position in qualifying so far and it is fair to say that over the first half of the year my race starts were a weak point. However in the last two rounds I have been making places not losing them on the opening lap as it is just a case of getting more race starts under my belt. Track position in qualifying is always a bit of a lottery but if I can qualifying the top half of the field I know we have the car to be able to stay there in the races.”