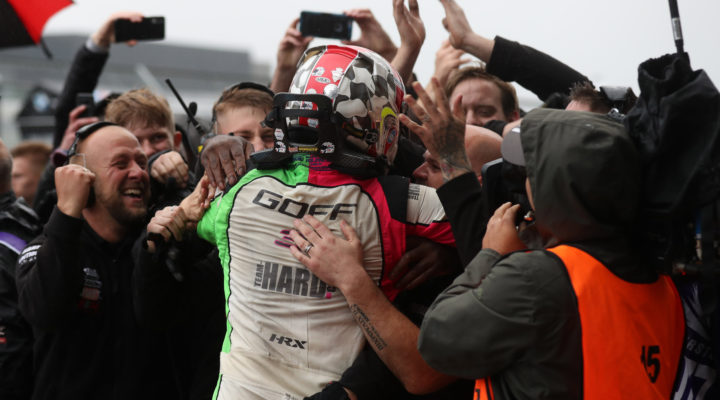 The race commenced in dry conditions but was quickly turned into a very damp occasion as drivers had to choose between the gamble of staying on Dunlop Sport Maxx dry tyres or switching to the Dunlop BluResponse wets.

The likes of BTC Racing’s Josh Cook and Halfords Yuasa Racing’s Dan Cammish led the way early on and were seemingly strengthening their title credentials, but all that was to change when a safety car was called to retrieve the stricken Honda of Matt Simpson.

Over the next three laps a number of drivers chose to switch to wet tyres under safety car conditions and it proved to be a masterstroke as the conditions worsened considerably.

RCIB Insurance with Fox Transport’s Goff and Laser Tools Racing’s Aiden Moffat were the first to surge through the field and it would quickly become a two-way fight for victory. It was either going to be a first for Team HARD or a first ever win for the Infiniti Q50, but that was soon decided after the duo hit the front.

Moffat, pushing too hard through Copse, slid wide and spun around whilst trying to catch Goff, meaning the latter could comfortably cruise home for victory.

“Race two we did the exact same thing,” said Goff. “It started to sprinkle on the out-lap of that one and we made the call. It means so much to me, my family our sponsors and the team. I couldn’t see anything. My windscreen completely steamed up with ten laps to go and I was driving through a little clear spot in the corner. It was so tricky.

“It’s unreal. I won my first podium with this team at Brands Hatch in 2013. It means so much for all of them. Things haven’t gone our way this year so I’m chuffed to bits.”

“Frustrating not to win,” said Moffat. “The car felt brilliant and I knew I had the pace. I was still confident I could come back. I need a bit of a change of overalls after that spin! It was my first rear-wheel drive wet race, so I’ll learn from it. We put a setup on it and hoped for the best. It was a big step for us today and I was confident battling at the front with Jack (Goff). It’s great to reward the team. I’ve put them through a lot with some tantrums and it’s great to be back up there.“They were horrible conditions but we called it a lap too late,” confirmed Neal. “I was confused who was running wets around us. It was still giving the slick runners good grip. I’m over the moon to be on the podium again but a bit disappointed not to get further up the road. I thought about hanging around to help Dan (Cammish) and his title battle but the disparity between him on dries and myself was just too great.”

Tom Oliphant (Team BMW), Tom Chilton (Team Shredded Wheat Racing with Gallagher) and Jason Plato (Sterling Insurance with Power Maxed Racing) were fourth, fifth and sixth respectively, whilst the BWW duo of Colin Turkington and Andrew Jordan were next in the order.

It was a nervy contest for both Turkington and Jordan – the pair touching at one point as they both looked to keep their respective championship challenges intact. Turkington now leads Cammish by 16 points with Jordan a further point in arrears as we move to the final rounds of the season at Brands Hatch in two weeks time.