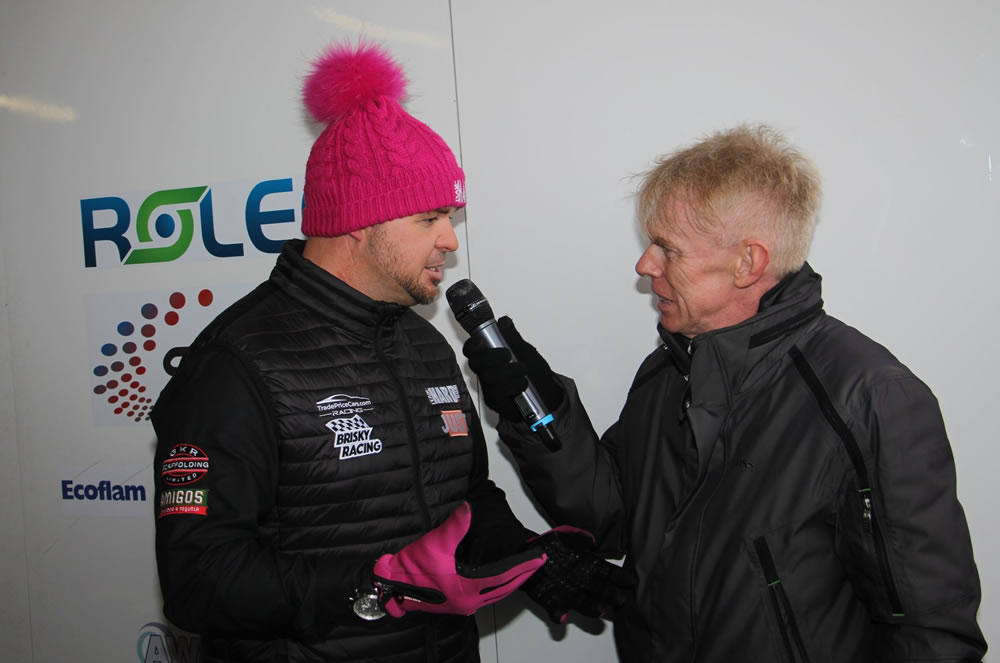 Interview with Tony Gilham post Media Day, Official BTCC Test Day and prior to a busy race weekend over Easter.

This week we’ve had Media Day. How did that go?

We sure have. Media Day was very, very productive. We had a plan that we were working around. We didn’t do everything that we wanted to do on the plan. We didn’t, get the new tyre runs in that we wanted to do but we got all the answers that we wanted at Donington so that when we go to Brands we will know exactly where we’re going to be and what our targets are that we think we can achieve. We’re very happy with the car and all the drivers are very happy. The engineers and all the guys been working so hard in the build up to Media Day it was just nice to get there. All four cars complete, ready, running reliably and importantly for us, potentially very quick.
So we’re quietly confident with what we’ve built over the winter and everything that’s gone into it but it was for us a very proud day because obviously we’ve essentially built four new cars over the winter. We took on a lot. It was a big workload, it is a big ambitious project with the amount of changes that we’ve made. And that includes obviously the whole infrastructure in terms of the team, the setup, cars, the whole lot.
So we arrive in 2018 exactly where we want to be in good shape. And now we’ve just completed the Brands Hatch test we’re now in very good shape for round one which is now just a week away.
So we’ve had the official BTCC test today. How has that gone?
Again a very productive day. A little bit mixed conditions but like UK Motorsport that is something that’s going to happen more often than not. So we have run through everything again we wanted to run through today. We’ve got some very valuable data, some great feedback from the drivers and again we know what we’re working towards today. What we came here to do we’ve achieved. We can take away lots of positives and feel that we’re going to be in good shape come next weekend, which is exactly what we planned to do and hoped to do. We’ve got four cars all in one piece. All tidy, all looking (in my opinion)very good, very attractive and four happy drivers. And most importantly a very happy workforce.
Did you see who’s livery was voted the favourite in our Team on social media? 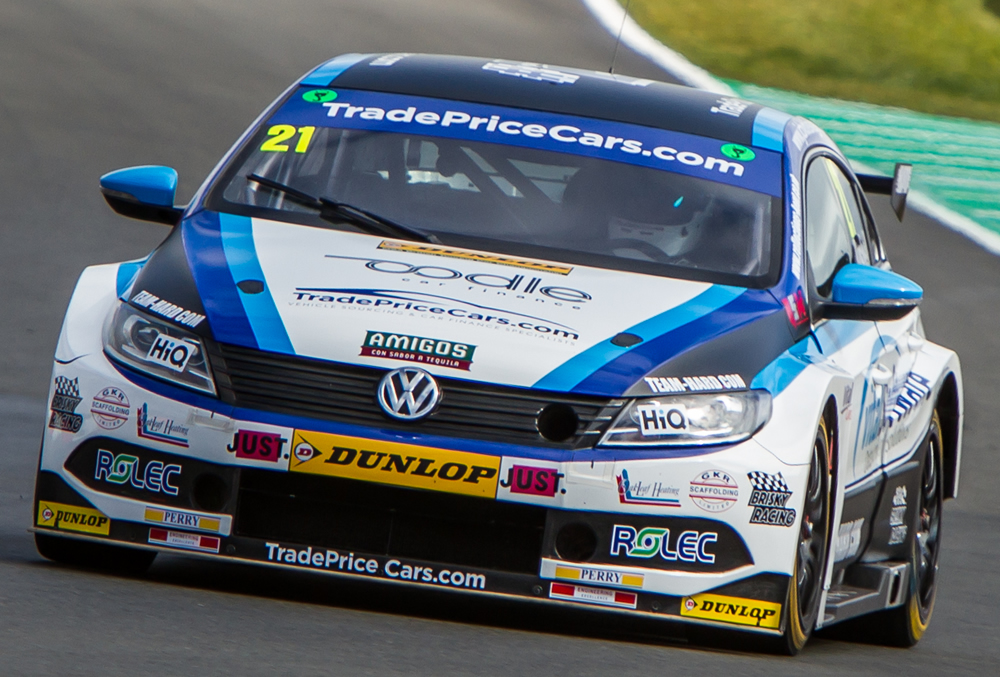 I did see that, it may have been the blue and black car which will please Mr. Wheeler! (Brisky Racing) It is a gorgeous looking car. I mean, I love all of them for their own reasons. Yes, they’ve got their individual colours, they’ve got their individual sponsors. There’s a little bit of uniformity going across the Team. So they are essentially showing that they’re all our cars but trying to keep everybody happy is not always the easiest thing to do when it comes to multiple partners and sponsors that are on the car but we’ve tried to keep it a little bit more corporate this year. So we feel we’ve produced what is an attractive looking car. In my opinion the best looking cars on the grid. I would say that, I may be biased but I think they look stunning. Now don’t get me wrong, there’s some other very good looking cars out there but at the end of the day this is all part of the show that we’re all putting on and it’s it’s great to see people making the effort.
There’s a bit of disappointment from a few of the fans with the lack of pink.
Yes that’s been said quite a lot because the green and pink obviously runs through the Team-HARD. veins. But at the end of the day that will never go away. The pink bobble hats, all the stuff. The pink ribbons will be put on the car for next weekend, which is where the pink came from, our Breast Cancer support. I would love to see just four green and pink cars go around the track from a very sort of selfish point of view and just because that’s where it all began. But at the same time we rely on drivers and sponsors and partners and so many people that contribute to the whole ship and operation. It’s a big old operation now so we have to work with people to make sure that we produce cars that are in the corporate colours of the companies that we are working with.
So yes, in an ideal world, there will be more green and pink going on but there’s reasons why there isn’t. And it’s growing up, we’re maturing, we’re evolving and there’s lots of other things away from just the Touring Cars where you’ll see the green and pink feature quite heavily. So there’s a whole new performance range coming. There’s a whole new cleaning product range coming. And there’s a whole different area of clothing. So we’ve got #HARDwear, #HARDstyle, #HARDperformance, there’s there’s a lot of Team-HARD. themed things that will be going on aside from just Touring Cars. We compete in lots of different series now and it’s something that will never, never go away, it will stay with us and there’s lots of exciting things happening behind the scenes that will be launched imminently.
So that leads us onto the busy weekend coming up with VW Racing Cup at Silverstone and the British GT Championship at Oulton Park. Are things looking equally as positive and promising in those areas?

Yes they are. We’ve got VW this weekend, for the first time alongside TCR which will be interesting to see how that goes. We’ve got very quick drivers in the team. Obviously, we’ve got our Scholarship winner with young Ethan Hammerton making his debut with us. He’s only 17. Toby Davis is back. Mark Wakefield, Jamie Bond. So it’s a very, very strong line up. So we’ve got a very strong team going into the VW cup to defend the title that obviously Bobby Thompson won last year.

British GT is the same weekend. We make a very warm welcome back this weekend to Will Phillips. Unfortunately, Nick Worm is not available this weekend due to personal reasons but he will be filling in alongside Ben Wallace. So that’s an interesting line up in a silver, silver pairing. Obviously, Anna Walewska and Callum Hawkins-Row make up the other (Pro/Am) pairing. So decent line-ups.
The balance of performance has not been very favourable for us in the Ginettas. So we will struggle in GT. There’s only 4 Ginettas on the grid this year and it does seem to be evolving in the higher mark of car being more favorable in terms of McLaren’s and BMW, which I understand. However, the Ginetta is still a very capable car. It’s just interesting to see where we go or how we fare now the new BOP (Balance of Performance) is out with the new throttle bodies and everything so it’s interesting. I’d like to say we’re in very good shape in terms of competitiveness, but whilst we’re very prepared as a team and our drivers are great, I’m not sure that we’ve got the right BOP that will allow us to compete at the front.
So there’s some decisions to be made going forwards for 2019?
Yes, there is. I mean, we look at all sorts of options and we’ve got a decent relationship with Ginetta. We’ve got the Ginetta Supercup running alongside Touring Cars. We’ve got 8 Ginettas in total, including Britcar. So we’ve we’ve got a big commitment and sensible relationship with Ginetta, but I’m not sure how long that can stand in British GT. So the GT4 category is very,very strong and I don’t know what the best thing to do is at this stage. I feel we’ve got a competitive package but it comes down to the BOP which is issued on a round by round basis. But from I guess any mark they will always want more because as a racing driver all you want to do is win and if you feel that it’s not possible to win with the performance that you’ve been you’ve been given then is frustrating. But that’s what it is, we’re part of the championship and we have to abide by the rules and the regulations that are set. So we give it our all and hopefully it’s good enough on the day because anything can happen in motorsport as we all know. So we’ll see, we’ll play it by ear.
Good luck to all of our guys and I’ll be up and down this weekend, trying to visit everybody. So from here I’m going to try and get to Oulton and to Silverstone this weekend at some point. It’s a long weekend over Easter but I also want to support everybody.