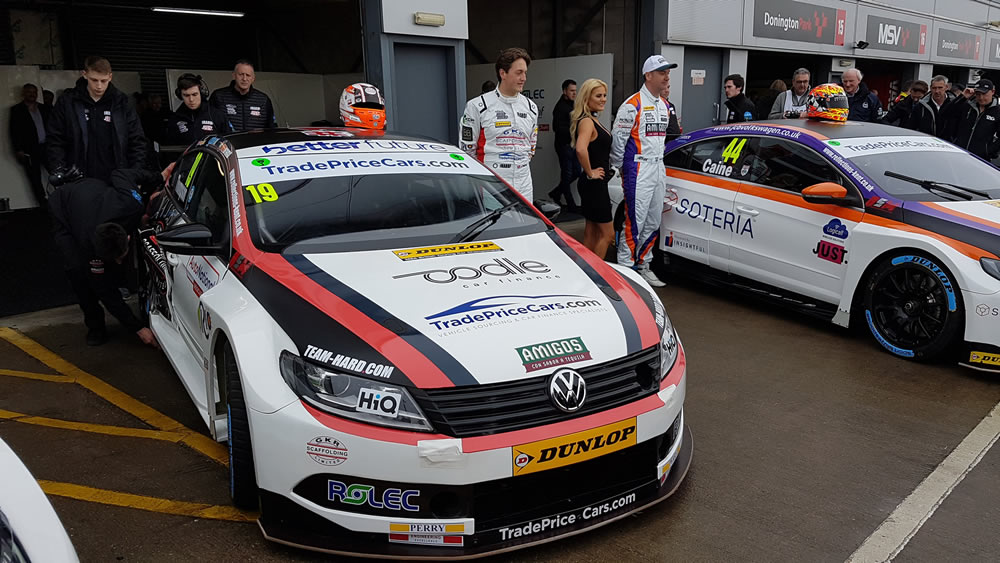 So we’ve had Media Day and the Official BTCC Test day. So how did Media Day go?

We were relatively happy with how the day went. We were affected by the red flags and stoppages which meant that we only ran new tyres on Bobby Thompson’s car. I think Bobby’s time was very impressive. He continues to impress with his very limited experience in these cars. He’s doing an excellent job. The other three cars never got a new tyres and our old tyre performance we were extremely pleased with. So I think that we’re in pretty good shape there.

And how has the Official BTCC Test been?

Here we’ve obviously been affected by the weather. It’s been wet and dry with limited dry running. Mike Bushell was seventh fastest just a couple of tenths away and his new tyre run was when on a par when it started to rain as well. So we believe there’s another couple or three tenths in there. He’s very happy with the car and says he can see areas that he can improve on himself. So generally we’re pretty happy at the end of the day with the continual rain. We changed Jake Hill’s car to a full wet setup and he is happy with what’s underneath him as well. So yes, we’re in not bad shape the week before Brands Hatch first race of the season

Do we have a long range weather forecast yet for Brands Hatch?

No, we don’t but it will probably be ‘changeable’. We’ll go with that!

So mechanically everything is going to plan?

Yes not not many bits dropping off now. I think we’re getting the hang of it now. (Laughing) We still need a big push next week to detail the cars to the situation they need to be. But the cars are proving to be reliable.

So the drivers are all happy, you’re reasonably happy. How much work is there to do. I I think you said before they were 80% there?

We’re about 90% there now. So they’ll be shiny and ready to go next weekend.

What are your predictions or aspirations for the weekend?

It’s very difficult to answer that question. I’d like to think that we could get two cars in the top 10 in qualifying and I’d like to think we could score good points in three races. I think with Mike Bushell he’s obviously still learning the second time into Touring Cars, he is improving every time he drives it and getting more comfortable and more experience in this type of car. Jake is obviously proven with three years in the championship. He’s proven to be fast and if you give him a fast car he will drive it fast. So who knows what Jake will actually achieve in qualifying. What you only really want is it not to be any damage. All four drivers to keep out of trouble!

So the burning question is, will there be team orders.

I think all of our drivers will work together I’m pretty sure that. They get on well and work well together.

Phil (Overall) Do you have anything to add?

We’re making good steady progress with the other two cars [Geoff oversees Jake (Hill) and Mike (Bushell). Phil oversees Michael (Caine) and Bobby (Thompson)]
We’ve be ironing out a few problems. Obviously, Bobby’s car was the last one to be finished. It’s running reliably and we’re very happy with Bobby’s performance with limited experience. Today he was competitive with the more tyre runs that we did so looking good. We are getting over one or two build issues that we had but that’s what testing is all about. So we are looking in good shape good shape reliability wise for the weekend.

Obviously we’ve got to get some more data for Bobby with some dry running so he gets used to driving this car in all conditions but we’ve unfortunately had a lot of wet testing, but it is Winter.

How many more testing days are there planned throughout the year?

There is one on the 12th of April at Thruxton. And then the Summer Test at Snetterton before the summer break finishes.

Is Michael Caine happy with his car?

Yes Michael is happy. Yes he’s happy with what he’s got. We’ve taken a snapshot at a certain time of the day looking at what everyone else is doing (because when you’ve got changeable conditions you can only look at that point in time, it’s no good comparing it to what was done before). So looking at what he was doing on the track at the same time around he’s looking competitive.