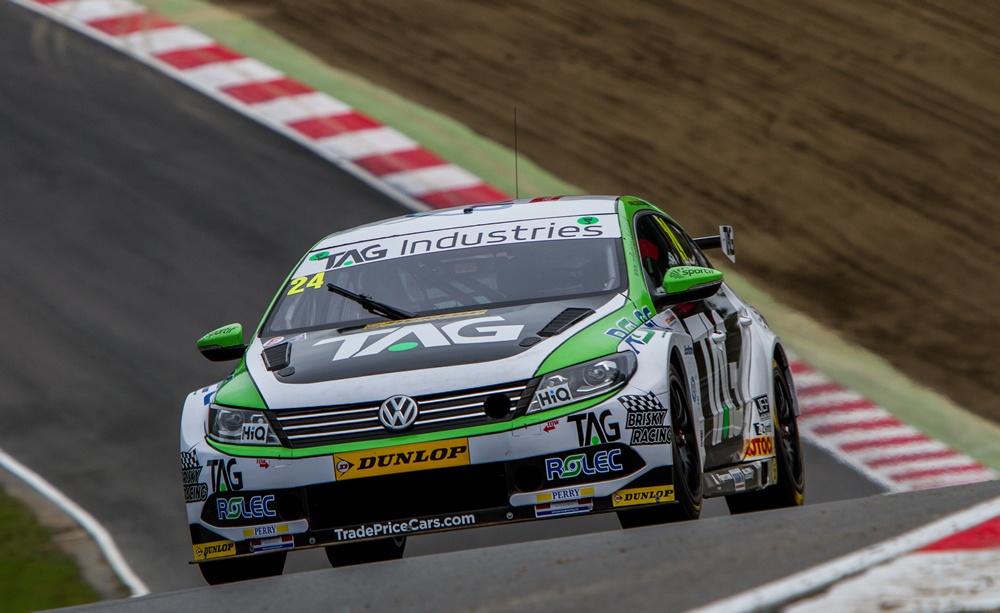 Finishing practice 7th, Hill’s TAG Racing crew worked to ensure the #24 machine was in top-form for qualifying, BRDC ‘Rising Star’ Hill charging to a spectacular 8th overall, the fifth time in ten events he had achieved this during the season.

“My guys did an awesome job, the car was fantastic. It was raining at the start of the session and there were two red flags went Smith and Cook went off so I think I could have found a bit more time but I’m really pleased” said Hill.

In changeable conditions drivers were left with a tough decision whether to go with wet-weather tyres or slick tyres on the grid – Hill, Jordan, Plato, Cook, Taylor-Smith and Lines going for ‘wets’.

A superb opening lap saw Hill benefit from Pole-Man Goff spinning and also slice past Austin and Chilton and then Matt  Neal and up to an impressive 4th place….when the news broke that the officials had judged he was rolling at the start, which is classified as a false start and resulted in a drive-through-penalty, and dropped down to the tail of the field.

“I was gutted – I genuinely didn’t realise – the grid is downhill so it must have moved just enough. The bigger problem was that we opted for wet-weather tyres, which was the wrong call – we were about 6 seconds slower than the guys on slicks – so I might have finished a few places higher – but it was P26 – at least I beat Plato and Jordan!”

Starting 25th as Jelley was unable to start, this time in the dry and on the option ‘soft’ tyre Hill was passed by the rear-wheel drive cars of Jordan and Plato off the line, but immediately re-passe Plato at Druids Hairpin and when Depper spun was back to P26.

A charging few laps saw Hill pass Cook, Whorton-Eales and later Jordan and a lap later both Cole and Butcher. Then Smiley lost ground as did Simpson, so Hill ended a strong drive in 16th place, finishing just behind Ollie Jackson.

“The car was really good – I think we set fifth-fastest lap, and I was pleased to make up so many places, just frustrating I was held up when the car was at it’s best. The ‘soft’ tyres went away towards the end otherwise I think I would have caught and passed Ollie. At least we are in good shape to score some points in the final race.”

As rain again fell just before the final race, almost all the drivers went for wet-weather tyres, and Hill made a strong start, immediately passing Ollie Jackson and Aron Taylor-Smith. Then on lap two championship-contender Turkington collided with Mat Jackson and was forced to retire – ending his challenge – and when Proctor slid off the safety car came out. By now Hill had also passed Chilton and Brett Smith so was into the top-ten.

A strong restart saw Hill challenging race-one winner Moffat, challenging the Mercedes driver for several laps, eventually diving past at Hawthorns Bend, by which time Morgan had closed in and passed later on in the lap.

Late in the race Hill had a fierce scrap with Newsham, Butcher and Smiley, but Hill was able to edge away and finish the season with a hard-earned 10th place and scoring points for the 11th time in season.

“Really good pace but I was stuck behind Aiden for a while – I think I could have challenged the group ahead otherwise – but so pleased to have finished in the top-ten again. Huge thanks to Tony Gilham, Gary Allen and Kingsley Lewis from Team HARD for all of their hard-work and support, and all of the boys working on the car, and my engineers Dan and Andrew who made a huge difference.”

“I wouldn’t be racing without the support of lots of awesome people – TAG Racing, Rolec Racing, Sportif Motor Group, Brisky Racing, Ecoflam, Danfoss, AWS Appliance Spares, Bill Rawles Classic Cars, Zynth, JD Pierce, Midhurst Electrical, Cairngall Motor Services,  ICLWM, Robin, Jason, Litchfield Motors, Spincar and everyone who has supported me – plus the team’s partners – I cannot thank everyone enough. I feel we have done a really good job – especially in qualifying – but have had some terrible luck, without which I know we would have taken a lot more points and maybe even a podium or two. I aim to be back and even stronger in 2018!” smiled Hill