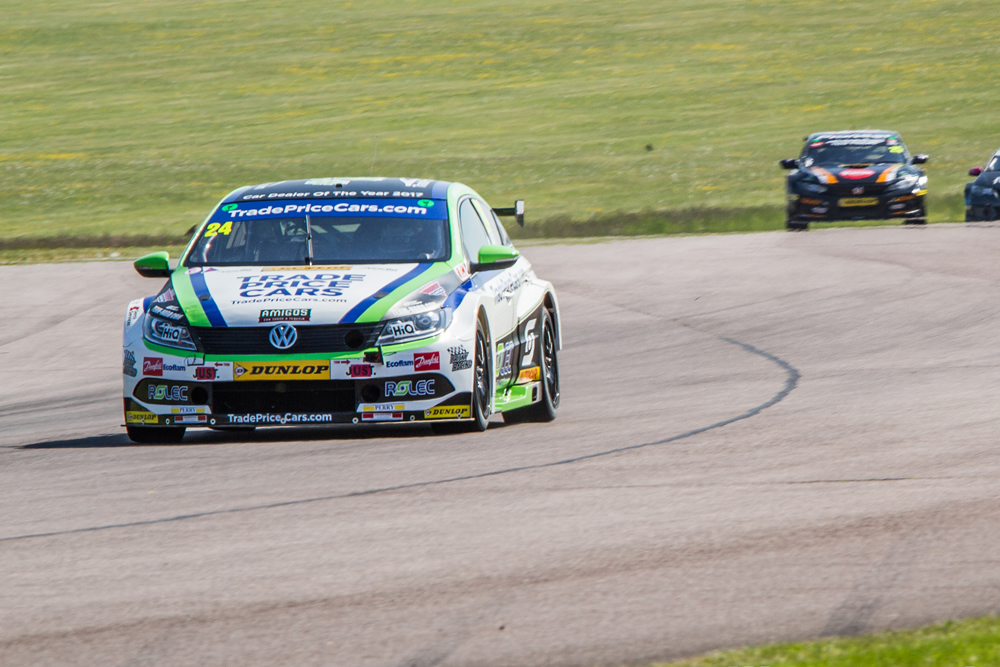 Leaving the fastest circuit on the calendar, Thruxton in Hampshire, Trade Price Cars Brisky Racing’s Jake Hill praised his team for the huge efforts over the weekend, whilst recognising ‘it was a tough weekend ‘ for all four VW CC’s on track.

Hill and team-mate Mike Bushell had shown promise in practice, both running in the top-half of the times, but come qualifying the competition found additional pace, seeing Bushell qualify 19th, Hill 25th and causing some confusion.

“We were feeling ok with the balance of the cars, but qualifying just didn’t unlock the pace we expected” said Hill.

Starting race one, a strong opening lap saw Hill move past Plato and Price then pass Nash at the end of the lap, then a problem for Ingram mid-race saw another place gained. Late on a battle between Cole and Hill’s team-mate Bushell saw side-by-side action and Hill edge past his colleague, to ultimately finish a hard-fought 20th.

“Was a really different feel to the car and the circuit temperature was over 40 degrees, so it was tough to understand how to get the best out of the car. I was so pleased to have made progress – only Josh Cook made up more places!”

Race two saw major changes to the car’s set-up, Hill saying his crew were’ Epic’ in getting things done in the time available, and a race-long battle with Jackson was settled in favour of the Audi driver late on, and Ingram headed past, but issues ahead for Smith, Oliphant, Cole and Cammish saw an eventual finish of 18th overall, but more progress.

“Jackson and I made contact late on but the car stood up to it even though it was a bit fairy after that! We learned a bit more about the set-up, so we have more data to look at and will try hard once more for race three”

In the final race Hill was promoted a couple of places when Ash Sutton had issues on the warm-up lap, and more seriously former champion Andrew Jordan was taken to hospital with the after effects of food poisoning, and a solid opening lap saw him up into P15 – the final points paying position – having passed Jackson.

Maintaining a solid pace early on, a charging Cammish in the factory Honda passed mid-race, with Butcher following on through, and thereafter a professional drive saw Hill bring the car home in 17th, once again having moved forward.

“A very challenging weekend. We tried so many things and worked so hard as a team, but just never got what we needed from the car – and that was the same for all four of us. We have made progress – I moved forward in all-three race,  finished all three races – with no damage which is rare in BTCC – and I come away still leading the Dunlop #ForeverForward award for most places made up. We will work very hard to ensure we are back in the mix at Oulton Park next time out”

“We had lovely weather and a great group of guests with us – a huge thanks to all of them and it was lovely to see Richard Wheeler and his guests from Brisky Racing, Dean Barrett from Rolec, Mark McElroy from Danfoss, Roger Burgess from Scoria Tech, Paul Kenney, Mike Jarvis….for the first time this season Bill Rawles, and as always a big thanks to John Miskin, plus of course everyone from Team HARD, Trade Price Cars and all of our partners”

“I had three top-ten finishes at Oulton Park last year, and absolutely love the track. I know the boys will work hard on getting things right – our team-manager Jamie, plus the lads on my car, Josh, Carl, Nathan, Gary, my engineer Yahor and everyone else were awesome, and we will do all we can to be back in the points again”