‘Hardest drive ever’ sees Thompson end opening half of BTCC 2018 on a high. 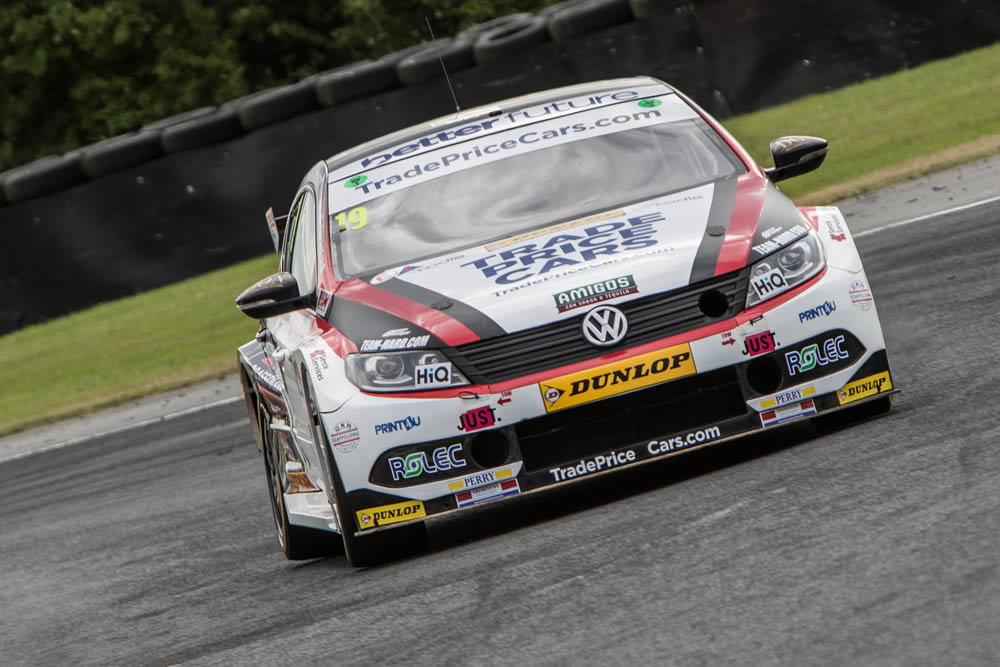 To coin a footballing phrase the half time whistle has blown with Bobby Thompson giving his maiden Dunlop MSA British Touring Car Championship season a timely boost with easily the best performance of his BTCC career to date in the final race of a scorching weekend at the 2.13-mile Croft circuit in North Yorkshire.

Although his 21st place effort in the 15th round of the 30 race season didn’t net the reigning VW Cup Series Champ a point, the manner of Thompson’s race three charge gave the 21 year-old Hornchurch based driver and his #19 Team HARD with Trade Price Cars crew a filip as the 60th anniversary season of Britain’s premier domestic race series heads into its five week summer break.

Making a drive that Thompson admitted was ‘the hardest of my life’ even more impressive was the fact that is came at the end of yet another emotionally draining weekend for the current BRDC Rising Star, who went in to Saturday’s qualifying session with precisely one flying lap of the technical but deceptively quick track under his belt following a day he described as ‘a total nightmare.’

Even though he ended Sunday on a high, Thompson and his team didn’t escape the trio of 15-lap races without drama, as a race two encounter with an errant stack of tyres at more than 100mph put paid to a realistic shot at a points scoring finish.

“There is no other way to describe Saturday other than a total nightmare,” said Thompson after a steering rack failure on his out-lap in free practice one relegated him to the role of reluctant spectator right up until the final three minutes of free practice two. Considering the fact that Croft is one of the few tracks on this year’s calendar he has never raced at, Thompson’s 1:25.974secs 30th place effort (just one second shy of 10th fastest man Rob Austin, seemed fairly remarkable.

“I had literally done about three corners on my out lap when suddenly the car stopped turning,” continued Thompson, who arrived at Croft sitting 11th in the Jack Sears Trophy standings and subsequently discovered his brake discs were warped after qualifying. “But my team didn’t give up and got the whole steering rack changed so I could at least do one lap in final practice but I knew that the brake discs were brand new for qualifying which isn’t ideal as I had no chance to bed them in.”

With new brake discs in place, for the third BTCC race day in succession temperatures soared as the 32 strong BTCC grid lined up for race one, with the trend of record setting crowds like those seen at Thruxton and Oulton Park continuing.

Starting half way around Croft’s inviting but infamous final hairpin, the tightest turn on the entire BTCC calendar, the #19 GKR Ltd machine lost a place to Tom Boardman’s MG before a first corner collision between Rob Austin and Stephen Jelley and the retirement of his Team HARD teammate Jake Hill moved him into 28th place.

After a safety car intervention, green flag racing resumed on lap 3 of what was now a 17 lap affair and Thompson began attacking the former World Touring Car star, feeding off the added confidence in his brakes, inching ahead of the MG briefly after a move at the hairpin although Boardman cannily kept Thompson on the outside for the run into turn one and reclaimed the place.

On several occasions during the first 12 rounds of the year Thompson has erred on the side of caution as he works on gaining the trust and respect of the series veterans and it wasn’t until the end of lap 11 that he finally made the move stick, although it took a heart-stopping wheel to wheel dice down the main straight for the pass to be completed. Despite having to keep a mindful eye on the potential repair bill for any misjudged move, you won’t overtake anyone in such a high calibre field unless you are prepared to commit 100 per cent to every move and this move was a sign of Thompson’s growing confidence.

Once clear of the MG, Thompson made short work of Brett Smith’s Honda and with Adam Morgan and Aiden Moffat also retiring, with four laps to go he had clear track ahead of him and a car that was handling to his liking. With 23rd place driver and fellow Team HARD driver Michael Caine too far up the road, Thompson served notice of his as-yet untapped potential by reeling off several lap times that matched the top ten runners and crossed the line in 24th.

“It’s just a good feeling to be able to attack and make passes with confidence,” said Thompson, who was 11th in the Jack Sears Trophy. “I’ve got a bit of damage and it got a bit hairy there with Tom but it’s a big step in the right direction and the brakes actually felt better and better as the race went on. “

That result meant a starting slot well away from the hairpin for race two and from the outside of the 12throw Thompson capitalised on some typical opening lap BTCC argy bargy through the first few corners and Tower Bend and was 21st when the pack headed towards the 110mph Jim Clark Esses. Somewhere in front of the #19 machine James Cole’s Ford was tipped into a spin, knocking one of the banded tyre bales directly into Bobby’s path. Hitting the tyres head on Bobby’s car suffered enough damage to the bonnet that required a pit stop, ending any hopes of a decent result.

“I wasn’t too pleased with my initial getaway,” commented Thompson, who eventually finished a lap down in 27th place. “The Esses is one area where you are flat out with no room for error so I couldn’t do anything to avoid hitting the tyres. In a way I was lucky that nobody collected me but my bonnet was just acting like a parachute so the lads told me to pit and get it taped up.

“When I got back out the car felt really good but once the leaders came through to lap me I had to just stay out of their way. The annoying thing is that I was following the top five and was easing back to make sure I didn’t get in their way. It just shows that we have the pace and can run with the leaders but we just can’t get up there right now.”

Starting from the 14th row for the final race and with the prospect of ending the first half of the season pointless now looking increasingly likely, Thompson might have been forgiven for having one eye on the summer break. But that isn’t the attitude that wins you eight races and a championship in the last two VW Cup seasons and although the #19 was out dragged off the line by Rob Collard’s BMW and Josh Cook’s Vauxhall to leave Bobby 29th at the end of lap one, for the remaining 14 laps nobody was able to keep pace with him long enough to even think about passing.

Thompson started his head-turning drive by passing teammate Caine around the outside of Tower Bend on lap two. Two laps later Smith’s Honda was passed on the run into the first corner. With Mike Bushell retiring, by the time Thompson pulled off a stunning inch perfect move on Ollie Jackson’s Audi going through the first complex he was up to 25th, which became 23rd with the departure of Chris Smiley and the retirement of Austin’s Alfa Romeo.

Although the field was quite spread out, early season championship contender Jack Goff was put to the sword in a very brave move at Sunny In and as others started to struggle with tyre wear Thompson’s pace did not drop. Hill sportingly offered no resistance when the #19 approached on lap 12, leaving Thompson two laps to gain two seconds and pass Cole for a place in the top 20.

Incredibly Thompson began the final lap in the slipstream of the bright yellow Ford although Cole did just enough to defend and Thompson was not about to undo all his good work with a rash last corner lunge. It may have only been 21st place but after the trials and tribulations of the first 14 races it felt like a win.

“I can honestly say I’ve never driven that hard in my life,” said Thompson as his received the plaudits from his hard working crew and team Principal Tony Gilham. “I didn’t leave anything out there and I feel like I was finally able to show the BTCC paddock a true glimpse of what we are capable of.

The result netted Thompson 6th in the Jack Sears Trophy and moved him back up to 10th in the season long JST standings. More significantly, over the second half of the race the #19 actually gained ground on Sam Tordoff, Tom Ingram and Tom Oliphant who finished eighth, ninth and tenth on the road. For a championship winning driver, 15 races without a points scoring finish is tough to take, but in the context of the season thus far, Bobby was still smiling as the spectator banks started to melt away into the mid-summers evening.

“We know we have a lot of work to do over the summer break but it feels really good to finish the first half of the year after a proper race with some proper moves. I was in a race there, not just competing and when I can race, that is what I can do. We haven’t had a totally clear weekend yet and we have always started at least one of the races at each round far lower than we should have been. But more often than not in racing you make your own luck and when that clear weekend comes, and it will, then we’ll be off and running. And I’ll be able to really pay back all my supporters and sponsors.”