HARD on Tour Equals More Silverware in the VW Cup 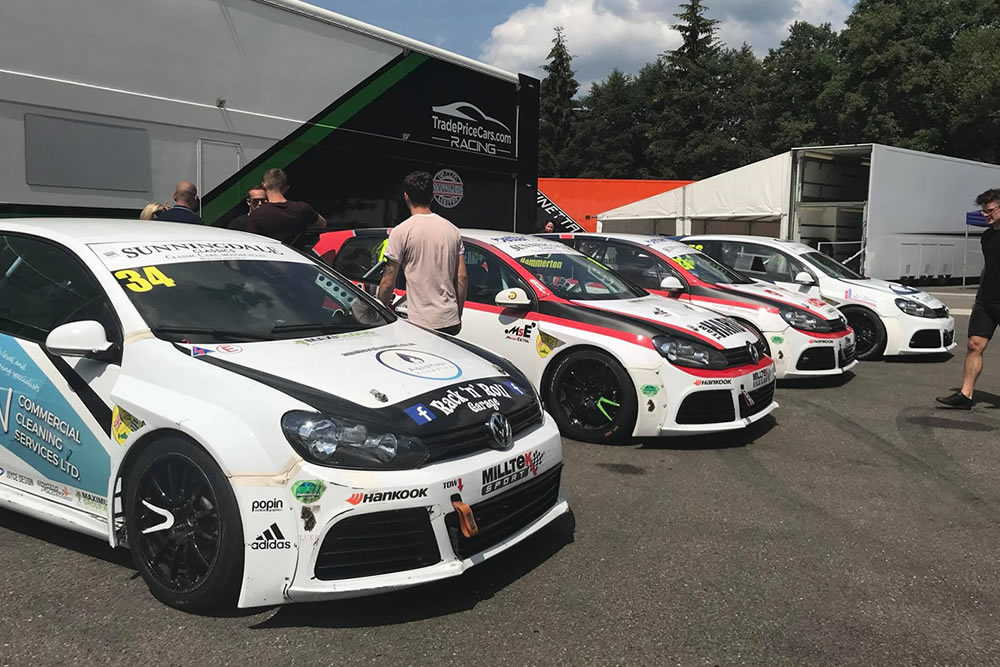 Circuit de Spa-Francorchamps is a special place. Racing through the forests at the highest of speeds. Our VW Cup drivers are lucky enough to experience the extreme undulations of this iconic circuit once every year. The drivers up for the challenge of the 4.35mile blast through the Ardennes Forest were Jamie Bond #56, Toby Davis #34, Callum Jenkins #19 and our Team HARD Scholarship winner Ethan Hammerton #23.

As we enter the second half of the season it’s clear that Jamie #56 is in contention for the championship title after a string of strong finishes at Snetterton and Brands Hatch. Toby #34 is also in with an outside chance after taking his first win of the season at Rockingham back in April. The pair are 30 and 56 points behind leader Chris Panayiotou; all to play for then.

It was an early start for the Team HARD crew as free practice got underway at 9:55 local time in the beautiful sunshine. It was a session that proved to have it’s ups and down. We had clear running for both Jamie #56 and Toby #34 who both didn’t have any major issues to report. The pair finished P3 and P10 respectively.

It was disaster of a session for Ethan #23 who’s car was chucking out plumes of smoke, could this of been the end of the weekend already for our scholarship winner? With the car back at base the problem was with the turbo, the crew got to work to fix the issue, but it would be touch and go as to whether Ethan would make qualifying and the rest of the weekend. Callum #19 reported a lack of power in his GKR Scaffolding Golf GTi which was evident as he was 12mph down in the speed traps, a disaster on the kemmel straight and up towards the infamous bus stop chicane. Lot’s to work on in the three hour ‘wait’ for qualifying.

With the sun still beaming down on the Circuit de Spa-Francorchamps qualifying would prove to be another interesting session for the boys and girls. Jamie #56 placed his Wrightsure.com Golf Gti P6 and in front of championship leader Chris Panayiotou for race 1, a job well done at this point in the season. Callum #19 and Ethan #23 in their fully restored GKR Scaffolding Golf Gti’s would line up in P11 and P17 with Toby #34 finished P13 after power steering trouble.

17:25 soon arrived and with-it time to race, the boys worked wonders to change Toby’s #34 gearbox in time for race 1 of the weekend. The time to race on one of the most iconic circuits in the world was upon the drivers and with the adrenaline pumping it came as no surprise when the 17 VW’s piled into La Source. The two GKR Scaffolding GTi’s and Toby’s #34 C.L.E.A.N Golf GTi all made it through with a clean front end. However, Jamie #56 made contact with another car whilst taking evasive action from the spinning Panayiotou. Fortunately, Jamie could carry on and finished the first lap in P6 as he started. Jamie #56 soon caught at passed the likes of Walton, Witts and Taylor down into turn 1 on successive laps and before you knew it the championship contender was in P3 which he would keep for the remainder of the 30minute race.

It was a remarkable race from our Welshman Toby Davis #34 who managed to pick his way through some robust driving from our competitors to finish the day in P4 from what he described as a ‘somewhat lowly grid position’. Toby’s #34 race management at Spa is further proof of how far he has come in the VW Racing Cup with Team HARD. Consistent points finishes are key to any championship.

More good news for the squad, Callum Jenkins #19 who is new to the championship put in a fine performance to finish the race in P8 and take the top rookie trophy despite having a spin at Campus (turn 14) on the opening lap. After the spin Callum #19 regrouped and much like Toby #34 calmly picked his way through an ever-diminishing field, as the saying goes ‘to finish first, first you must finish’ that certainly applies to Callum here.

Ethan’s #23 day had been very troubled from the get go and unfortunately for our scholarship winner the race also proved disappointing through no fault of his own. Ethan #23, who was running as high as P6 was for much of the race after a good start was forced to retire with just three laps remaining due to a lack of power from the engine. Further disappoint struck Ethan has he fell just short of the 75% completion rule and therefore didn’t classify. It was just one of them days for the 17 year old.

With all day to prepare for the final race of the weekend we went into the race with spirts high. Toby #34 was placed highest on the grid with P3. It was a frantic first couple of laps with all of our drivers making good progress up the field. Leading the charge was Toby #34 who had climbed to P2 and was putting the pressure on the race leader Witts #14. Toby saw his opportunity to take the lead and sent his C.L.E.A.N Golf GTi down the inside at the bus stop chicane. Witts #14 closed the door on the Welshman and the two made slight contact into the first part of the chicane, into the left hander Toby #34 held the upper hand and was in front but an over optimistic dive down the inside by Witts #14 put both in a spin. Toby would continue to finish a fine P2 despite the damage incurred from the lap 2 clash. Callum #19 performed spectacularly to finish P4, his highest finish of the season.  Jamie ended the race in P6 after he was forced into the wall on the run down to Eu Rouge, another solid weekend for Jamie who moves ever closer to the summit of the championship. Ethan #23 who ran as high as P6 again suffered more engine trouble and eventually retired with only 4 laps completed.

Overall it was a good weekend for the team who saw its driver collect three trophies. Spa never disappoints and the mix between this iconic circuit and the thrills and spills of the VW cup made for some fantastic racing all over the grid. Spa, we will see you next year!