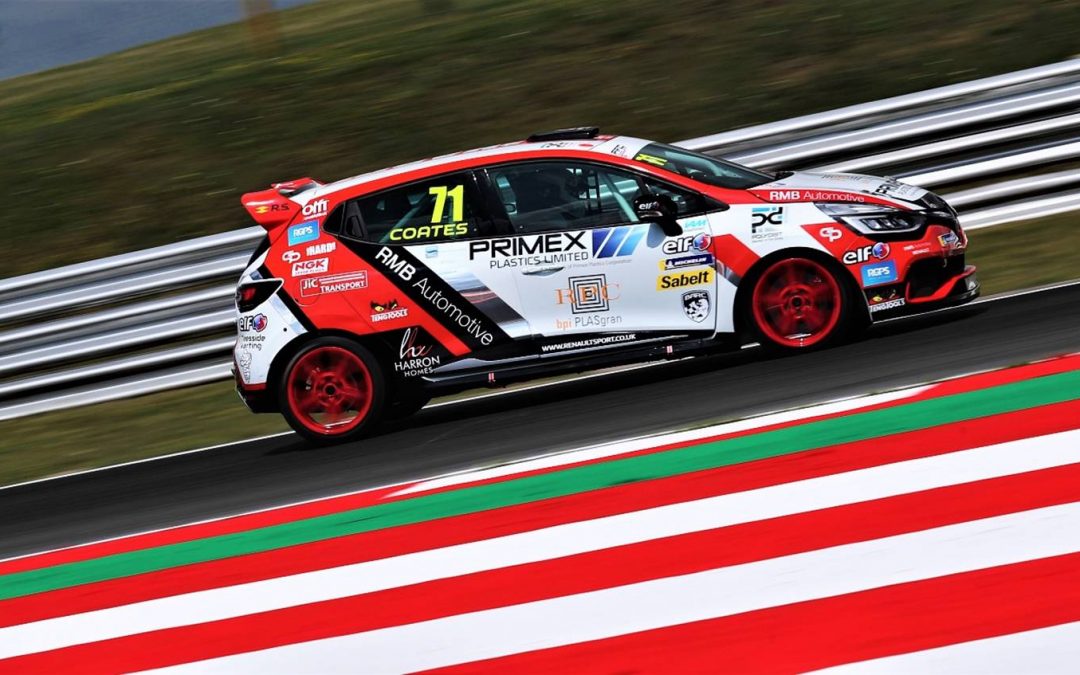 Team HARD. Racing’s Max Coates took a win in the Renault UK Clio Cup at Snetterton at the weekend to hold on to his championship lead.

Coates qualified his Primex Plastics and RPC bpi PLASgran sponsored car in 3rd and 2nd positions for the weekends two races respectively, narrowly missing out on two front row starts.  In fact the front three drivers on the gird were separated by less than three tenths of a second for race one and just half a tenth in race two.

The Yorkshireman made a good start in race one but couldn’t make up any places as he entered the first few corners.  He took a watching brief in the early stages until an overtake gone wrong between the leading two cars opened the gap for Coates to pounce.  Immediately up to 2nd the Harron Homes backed driver set-up the move to take the lead at the turn four hairpin passing team-mate Jamie Bond.  Coates looked set to take the win despite constant pressure from Jack Young behind until heavy contact from his chief title rival caused Max to lose the lead.  The damage caused a puncture on the final lap which left Polydist UK sponsored Max to manage the final four turns with very limited grip, crossing the line in a cloud of smoke in 6th place.

In the second race the RMB Automotive and Bennett Renault backed car started well hanging onto 2nd position.    The leader was given a 10 second penalty for a jump start thus promoting Max into the lead early in the race.  Then contact again from his title rival who forced his way past Coates into the then lead of the race.  Coates stayed right with Young to the flag despite battling handling issues caused from the earlier contact.

After the race Coates was awarded the win following a penalty for Young who had been deemed to have gained an unfair advantage in the overtaking move to gain the lead.

Later Coates said, “The race two win has made up for the disappointing finish to race one which got a bit hairy at the end with the puncture.  It’s shaping up to be a very close battle at the front with a number of drivers able to make an impression on the podium.  Thruxton is next and it’s a track I had two podiums at last year, it is the fastest track in the country and it’s always a challenge.”

Max and the team have two weeks to prepare for the Thruxton event down in Hampshire on the 17th and 18th August where the Renault UK Clio Cup will be again supporting the British Touring Cars.  Max will go into the event as the championship leader, just six points ahead, with race two scheduled to be broadcast live on ITV4 at 13:45 on Sunday 18th.