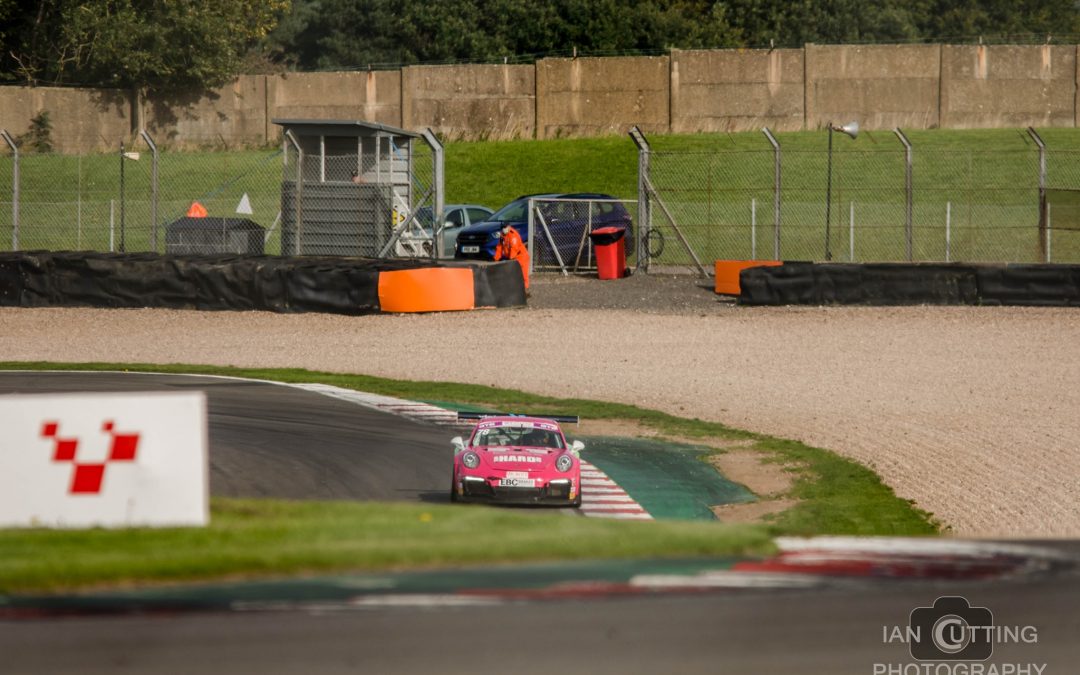 “The sprint race went ok. It was a bit of a battle into turn 1 and at the start I got swallowed by a couple of cars, getting stuck behind them. I was catching them in a lot of the corners, but I just couldn’t on the straight and didn’t have the top end to get past them. It’s such a tight track and I had nowhere to go, I was hoping they were going to make a mistake, but they didn’t. I am getting quicker and quicker every time but, in the end, we did have to settle for P3. In the feature race we struggled a bit. We put new brake pads in this weekend although the  actual longevity of the pads we didn’t know and half way through the race, the pedal went  to the floor so I had to back off a lot and  Sam struggled too.. I don’t think it’s a track that suits the Porsche and the way it’s made. The fact that we’re running full cup set springs means there’s no adjustment for us so we’re really rough and it’s a rough track and that’s just the way it is. However, we’re pushing it as far as we can and tomorrow’s another day and we will see what we can do.

“I have mixed emotions about this weekends racing. Originally, I was very happy with the results of the sprint race, although it might not have been as clean as I hoped. I got a poor start and tried going around the outside of the Mclaren but I caught on the grass and dropped down a couple of places. Unfortunately, I was struggling a bit with the break temperature throughout the race and contacted the sister car, Simon Orange for which I can only apologise for. It is unfortunate but the pedal just went long and there was nothing I could do about it. However, I came away with a good result and I was lapping quickly towards the end. Once there was some clean air and the breaks were in the temperature range, I felt really good and was in a really good position for the pit stop race. However, shortly after finishing the race I realised I had been disqualified and I feel I really didn’t deserve that.

I had higher hopes for the feature race where we had a very strong start. Unfortunately, we had to start from the pit lane because we had a slight issue with the wheels, but we made a strong start and managed to get through the other cars that were also starting from the pit lane, catching  up with the rest of the pack and soaring our way through. We had a comfortable lead in class, a good 20 seconds over second place which covered us for our pit stop success time that we carried out from Silverstone. I was very very happy with that when I came into the pits, and then unfortunately a couple of laps into Harry’s stint we had a bit of an electrical issue where we couldn’t change gear and that really put us down. Thankfully, we managed to salvage 4th place from that but it’s definitely not what we deserved. I feel like we definitely deserved a win for that, especially after I was robbed of the first place on the sprint race given the disqualification”.