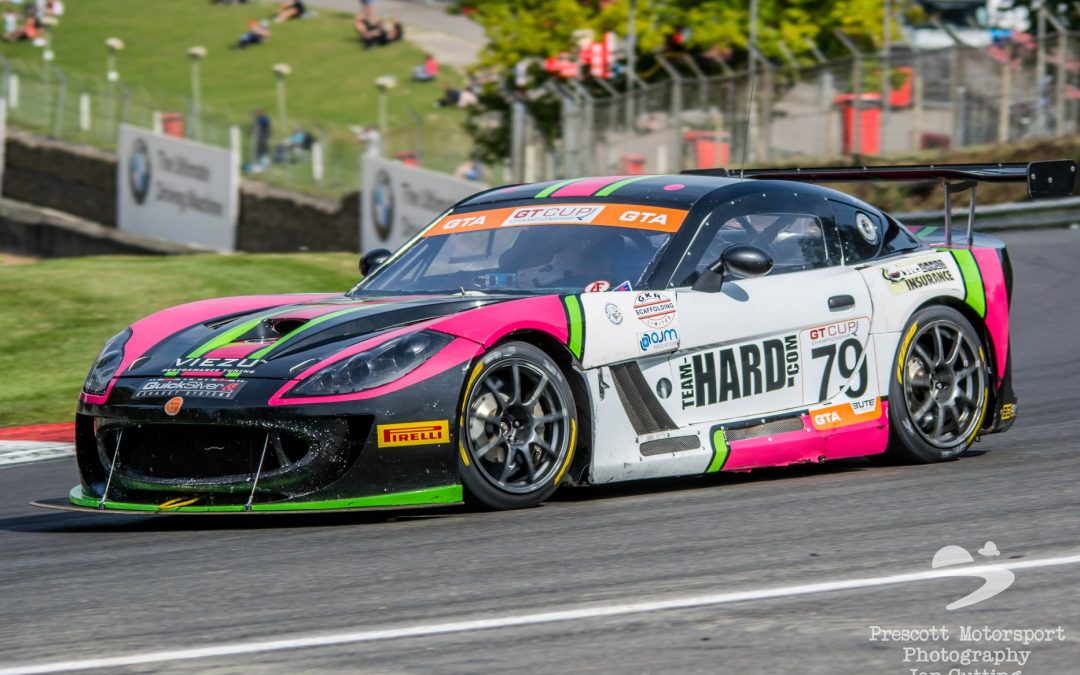 Team HARD. Racing’s #79 Ginetta GT4 Supercup challenger went into the Brands Hatch weekend sitting pretty at the top of the GTA class championship and sat 5th overall in the GT Cup standings. Kris Prosser returned after sitting out the last round of the series and partnered Nicholas Scott-Dickeson who deputised last time out.

The team were honoured with prime TV coverage during Saturday’s event with the #79 car having onboard cameras for both the sprint and feature race, TV viewers were not to be disappointed.

Prosser qualified the car on pole position after setting a lap some 1.5seconds faster than the 2nd car in class. Some were thinking it would be an easy run to chequered flag for Prosser. It was far from it.

Prosser set off with some scorching pace in the early stages as he lapped the Brands Hatch Grand Prix circuit a dazzling 2 seconds a lap faster then his nearest class rival. An uncharacteristic mistake at Surtees on lap 4 saw him drop down to 3rd in class and left him with plenty of work to do for the remaining laps of the race. Clearly determined to hit the front once again, Prosser continued to push, beating his own fastest lap again and again until disaster struck on lap 11 as the cockpit of the #79 Ginetta began to fill with smoke. Prosser, doing the sensible thing, immediately pulled off the circuit at druids and was forced to retire from the race.

A fire broke out at the rear of the car with fibre glass rubbing on the exhaust after a small altercation with another car in the holding area before the race begun. Prosser was taken to the medical centre for checks after inhaling a large amount of toxic smoke given off from the burning fibreglass on the #79 machine. Thankfully Prosser was given the all clear and was unharmed from the incident.

Unfortunately for the team the #79 car was beyond repair for Saturday’s endurance race, meaning both Prosser and Scott-Dickeson were forced to sit on the side-lines.

The Team HARD. Racing boys pulled off a mini miracle and arrived at the circuit in the early hours of Sunday morning armed with a new car ready for Prosser and Scott-Dickeson. An amazing achievement after Saturday’s events.

Sundays sprint race saw Scott-Dickeson take to the wheel and immediately slot into 2nd before being forced to surrender the position after a race long battle with the #8 BMW with just 8 minutes to go of the 25-minute race.

Scott-Dickeson was delighted to bring home silverware for the team “The sprint race was a great challenge for me as my last race at brands was at night. The car on fresh tyres really brought out the best in the car and me as I posted my fastest laps of the weekend trying to chase down the other GTA runners. I was happy to finish in a podium position and it was only when I got back to the garage I could see how happy my team and Tony were on my pace which was a massive boost to have getting out of the car.”

The feature race saw another dice with the #8 BMW as Prosser took over for the opening stint and raced into 1st place. Prosser held off sustained pressure until he dived into the pits for the mandatory pitstop and driver change on lap 20. The #79 was hit with a success pit-stop penalty which dropped the car back down into 2nd once it returned to the track with Scott-Dickenson at the wheel. Despite pushing hard for the win, the pair had to settle for 2nd, important championship points in the bag and more silverware for the team.

A tale of two halves for Prosser who was in reflective mood on Sunday after the racing had reached its climax. “Having jumped into the car for qualifying on the Saturday not knowing the GP loop it felt quite odd turning left at Surtees. It didn’t take too long to learn the circuit and put the car on pole for the race!

I noticed halfway through my race that the car was starting to smoke slightly, after pitting to check if the car was okay, I got sent back out with some mist to unlap myself! Putting in a hot lap but possibly too hot! After turning into paddock, the car began to produce a large amount of black smoke in the car. I pulled over by an orange marshal board to get a fire extinguisher. The car at first didn’t seem too bad but once the fire caught a fuel hose at the back it began to produce huge flames down the side!

The team realised before the race had finished that they’d need to get a new car so by the time I was discharged from the medical unit the guys had gone back to the workshop to build a new car for the next day. I visited the guys later that night at the new unit and the new car was looking good!

Sadly, as the fire damaged car had a lot of powder & foam inside, this was a priority to clean as it can damage the electronics inside.

The next day we got the car out for Nick who took 5 seconds of his lap time which was amazing work! I started the final race of the weekend last on the grid to pull into 1st in class when I was brought into the pits. Sadly, due to our excess pit penalty we lost a lot of time to the BMW. P2 in the end but an amazing job by the mechanics to turn around a new car within 15 hours!”

To round the weekend off in style the Team HARD. Racing mechanics were award with ‘Team of the Weekend’ for their sterling efforts in getting the #79 car back out for a double podium finish in Sunday’s races.

You will be able to view highlights of the eventful Brands Hatch weekend on Motorsport.TV and Youtube over the coming weeks and for LIVE action, the GT Cup squad is at Donington Park on 21/22nd September for the penultimate round of championship.