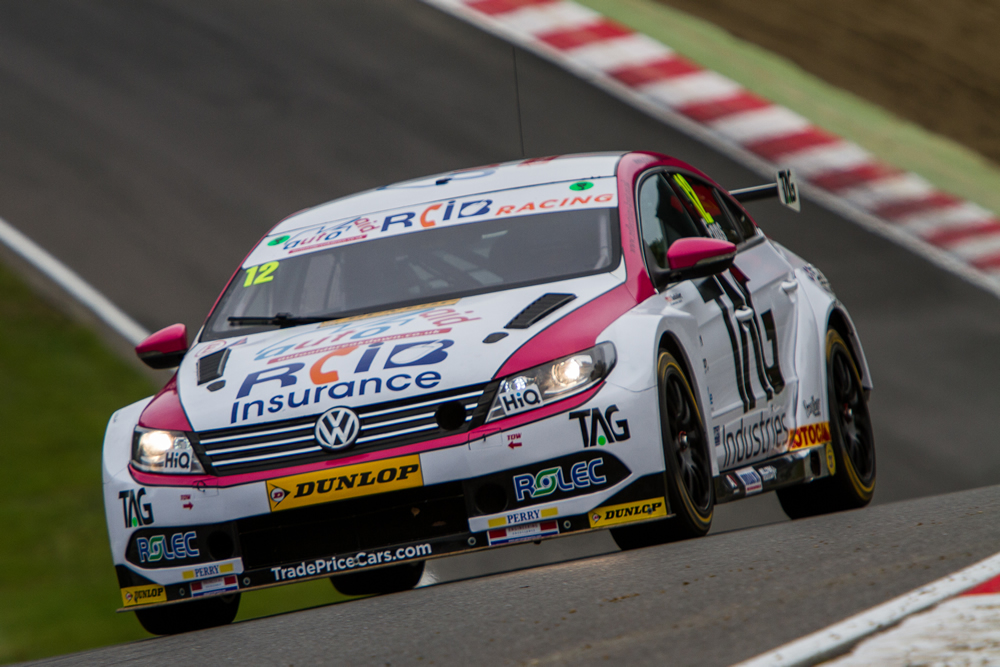 Mike Epps has brought his 2017 Dunlop MSA British Touring Car Championship season to a close in sensational fashion as he converted his first ever pole position in the series into a superb breakthrough top five finish in the final race of the year at Brands Hatch this past weekend (30 September/1 October).

A battling drive up to tenth in race two had placed Epps in contention for the reverse grid pole position and broadcasting legend Murray Walker duly picked his number out of the hat, placing the Hemel Hempstead racer at the front of the grid for the first time in his BTCC career.

With the heavens opening ahead of the race, a treacherous wet circuit greeted Epps as he led the thirty car field around for the green flag lap before producing a great launch off the line to lead through the world-famous Paddock Hill Bend for the first time.

His advantage would unfortunately be short-lived as contact to the rear sent him wide through Surtees bend and dropped him to second, but Epps composed himself well to maintain the position into an early safety car period and then again once the action resumed.

With his AutoAid/RCIB Insurance Racing Volkswagen CC struggling for traction in the conditions compared to his rivals, Epps was unfortunately powerless to prevent himself getting shuffled back to fourth a few laps later, but he would continue dicing with established front-runners throughout.

After losing another spot later in the race, Epps would keep former triple champion Gordon Shedden at arm’s length in the closing stages to go on and take the chequered flag in a career best result of fifth, bringing the season to a close with a ninth top ten finish of the campaign.

That result capped off a finale weekend which had started with a fairly difficult Saturday for the 25 year old, who would finish on the cusp of the top ten in the opening free practice session, however some balance issues with the car would ultimately leave him in twentieth overall come qualifying.

Some changes to the car overnight would produce some positive pace at the start of race one on Sunday though, with Epps superbly picking his way through the field from 22nd at the end of the opening lap into the points positions and a high of thirteenth place by the end of lap eight.

Unfortunately for the Anytime Fitness and Simply Race supported driver his progress would be halted as heavy contact from one of the title contenders bent the rear end of his car and left him nursing the damaged car home to the finish in eighteenth position.

Epps would bounce back in race two though as a continuation of his strong early pace allowed him to once again make steady progress through the hotly-contested midfield battles, eventually passing the eventual 2017 champion Ashley Sutton for what would turn out to be a crucial tenth place finish.

As well as being his career-best BTCC result, the fifth place in race three would also be Team HARD’s best result of the season and it ensured that Epps ends the year as the team’s highest-placed driver in the overall and Independents drivers championship standings, in seventeenth and eighth respectively.

Mike Epps: “It’s a slightly bittersweet moment to cap off an interesting day. We’ve had some good racing through the day and got ourselves into that position for race three, but ultimately we just didn’t have the pace in the car to keep it up there in podium contention which is a shame.

“It’s been an up and down day to cap off a rollercoaster season. We started the year with top ten finishes here at Brands Hatch and we’ve ended it the same way. We haven’t maximised the promise in the car at points this year, but we’ve ended it in the mix at the front which is good.

“Overall it was a positive way to end the season and I’m happy. It’s the team’s best finish of the season, so I’m glad I could give them that, and my career-best result which hopefully can serve as a springboard for me into a successful 2018.”