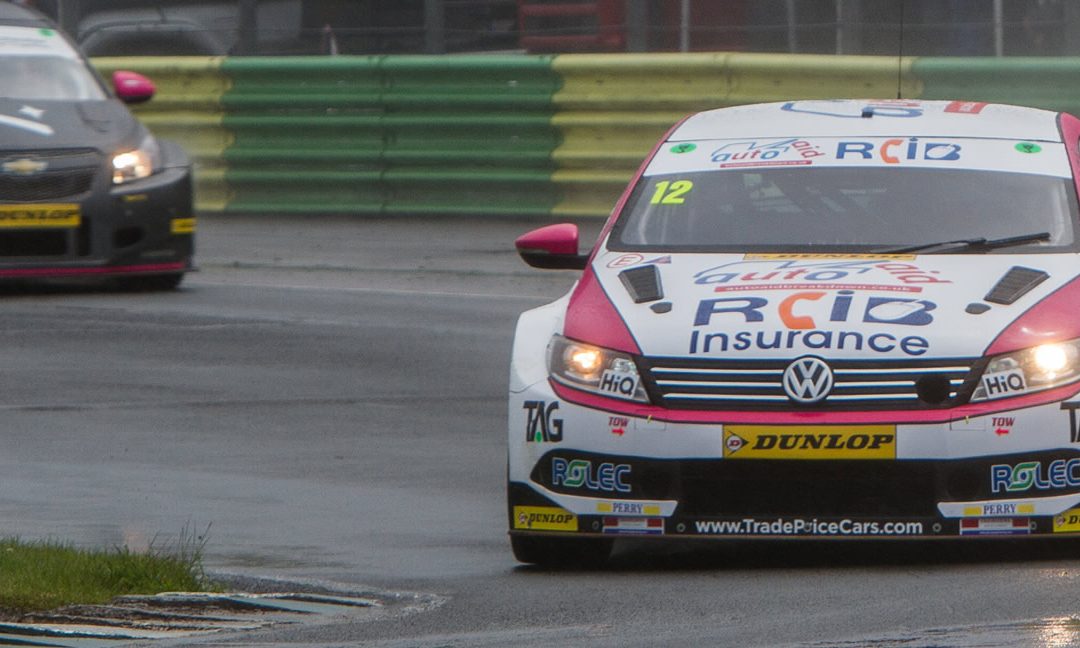 A fantastic drive from twenty-second through to twelfth position in race two was the highlight of an otherwise frustrating fifth meeting of the 2017 Dunlop MSA British Touring Car Championship season for Mike Epps at Croft this past weekend (10/11 June).

Heading into the weekend off the back of a career-best eighth place finish last time out at Oulton Park, Epps was in a confident mood as he returned to one of his strongest circuits from 2016 – a star performance in race three last year having seen him climb from thirtieth on the grid to fifteenth.

Epps would encounter challenging wet conditions throughout the opening day in Yorkshire, with the 25 year old getting to grips with the treacherous track surface throughout free practice ahead of the all-important qualifying session later in the day.

The 25 year old wouldn’t get the opportunity to show the true pace of his Auto Aid/RCIB Insurance Racing Volkswagen CC however as a frightening multi-car incident led to a red flag and eventual cancellation of the session with just nine minutes on the clock.

With no flying laps under his belt before the stoppage, Epps’ best lap-time put him twentieth on the grid for the opening race of the day on Sunday, which would take place in dry conditions following an improvement in the weather overnight.

A positive start to the race would see Epps battle his way through to fifteenth position by the end of the second lap before heaping the pressure on those ahead, with one driver having to cut the chicane to stay ahead – a move he was later reprimanded for.

Unfortunately for the Anytime Fitness, Simply Race and iPro Sport supported driver, his challenge for a points finish would end on the next lap when two lots of heavy contact to the rear of his car at the final hairpin sent him off track and tumbling down the order.

Recovering to the circuit back in P27, a spirited fightback over the second half of the race would end with Epps bringing his battered Volkswagen home in 22nd at the chequered flag, putting him in the same position on the grid for race two.

The Hemel Hempstead racer would get his sole opportunity of the weekend to show his real potential in that encounter, with a composed march through the field seeing him pick his way through to the points positions within the opening five laps.

While a number of other drivers made contact around him to gain positions, Epps cleanly worked his way into twelfth position by the finish to record a seventh points finish of the season so far and put himself firmly in contention for a top ten result in the final race of the day.

Unfortunately for Epps, his challenge would come to an end after just two corners though as heavy contact from behind at Clervaux sent him sideways, before another big hit at Hawthorn would cause instant race-ending suspension damage to his Team HARD machine.

Epps now lies in sixteenth position in the overall standings as he finishes the first half of the 2017 season already twenty points better off than his final 2016 tally, with the championship now entering a seven week summer break before the next rounds at Snetterton on 29/30 July.

Mike Epps: “I don’t really feel like we got a chance to do anything this weekend to be honest. We showed a glimpse of our potential in race two, which proved we’ve gone in the right direction with the car, but other than that it was really a case of the circumstances going against us.

“I was racing cleanly with everybody in the opening race but then just smashed off for no real reason at the hairpin, and then race three was over before it had started really as we got bashed around again, so race two was the only one where I was given the chance to show my pace.

“I think we actually could have had a really good weekend here if things had gone our way, but sadly once again we’ve seen the poor driving standards of others cost us in two races and the policing of that needs to be stricter as we’ve reached the point where there’s just too much contact.

“Hopefully we’ll be able to get out for the two-day tyre test at Snetterton in early July, as that will give us a chance to try some things with set-up ahead of the next rounds. The car should go well there, so hopefully we’ll come back stronger and be back in the top ten after the summer break.”