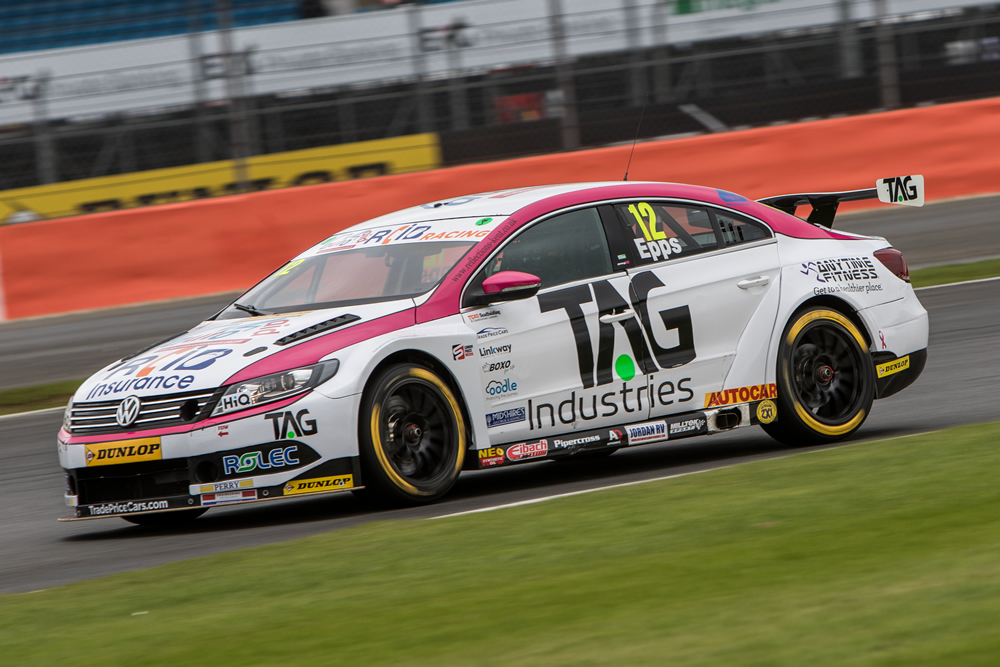 Mike Epps enjoyed a return to form with a pair of top ten finishes in the Dunlop MSA British Touring Car Championship at Silverstone this past weekend (16/17 September), however he was left feeling there could have been more after running as high as fifth in the final race of the day.

Epps laid down a statement of intent in the opening free practice session of the weekend on Saturday morning, producing eye-catching pace in tricky wet conditions to top the timesheets for a long spell, before eventually finishing third overall as others capitalised on an improving track.

After finishing on the fringe of the top ten in improved conditions during the second free practice session, the AutoAid/RCIB Insurance Racing ace would unfortunately encounter a nightmare qualifying session as an issue with the rear of his car left him unable to show his potential.

A startling lack of rear end grip meant Epps could only guide his Volkswagen CC to the 25th best time during an incredibly close session, which left him firmly on the back-foot as he headed into the penultimate race day of the season in front of a huge trackside crowd.

Rainfall in the early stages of the opening race would present Epps with the opportunity to replicate his free practice one pace and the Hemel Hempstead racer took full advantage to produce a sensational climb through the field over the first half of the race.

Into the top twenty within three laps, Epps would produce some superb overtaking manoeuvres, including storming around the outside of three-time BTCC champion Gordon Shedden at Brooklands, as he scythed his way through to tenth position.

Unfortunately, his charge would be halted following a massive incident for his Team HARD stablemate Will Burns that ultimately led to an early red flag conclusion to the race, though tenth place would still mark a sensational climb of fifteen positions in just ten laps.

The 25 year old would be right in the thick of the action at the bottom of the top ten throughout the second race of the day, battling with the likes of Shedden and former World Touring Car champion Rob Huff on his way to another tenth place finish at the flag.

After cruelly missing out on the reverse grid pole position for race three, Epps would dive into the limelight as a loss of momentum for the pack ahead through Copse allowed him to storm into fifth position on the approach to Becketts.

A lengthy safety car period followed, but once the action resumed Epps would stick to the rear of the car ahead over the next few laps, however his efforts were made tougher by the fact he was battling with the option hard compound tyres for the race.

Slipping back to sixth, the defining point of the race would come on lap fifteen as contact behind sent Shedden spinning over the grass and straight across the front of Epps’ Volkswagen, the duo a matter of inches away from a massive incident.

Epps would luckily recover at the tail of the top ten once again and eventually took the chequered flag in twelfth position in his Simply Race and Anytime Fitness backed machine, a result that completes a brilliant points finish hat-trick for the weekend.

Mike Epps: “It’s definitely been an up and down weekend, but it was certainly nice to be up at the top of the timesheets in free practice one after having some wet weather to play with, as when it rains I’m able to do a little bit more with the car.

“Qualifying was therefore immensely disappointing, but we made a massive step forward in the races. I was delighted to come through the field so quickly in the first race and pick up back to back top ten finishes.

“The final race was frustrating but enlightening. It was fantastic to be running in the top five for a long spell, but in truth we were struggling on the hard tyres. I have to thank the skies that Gordon [Shedden] didn’t collect me and I was ultimately able to make the finish.

“I really feel like we’re in a position now that we can build on for the final weekend of the season. It’s certainly all come a bit late in the year, but nevertheless hopefully we can end on a high at Brands Hatch.”