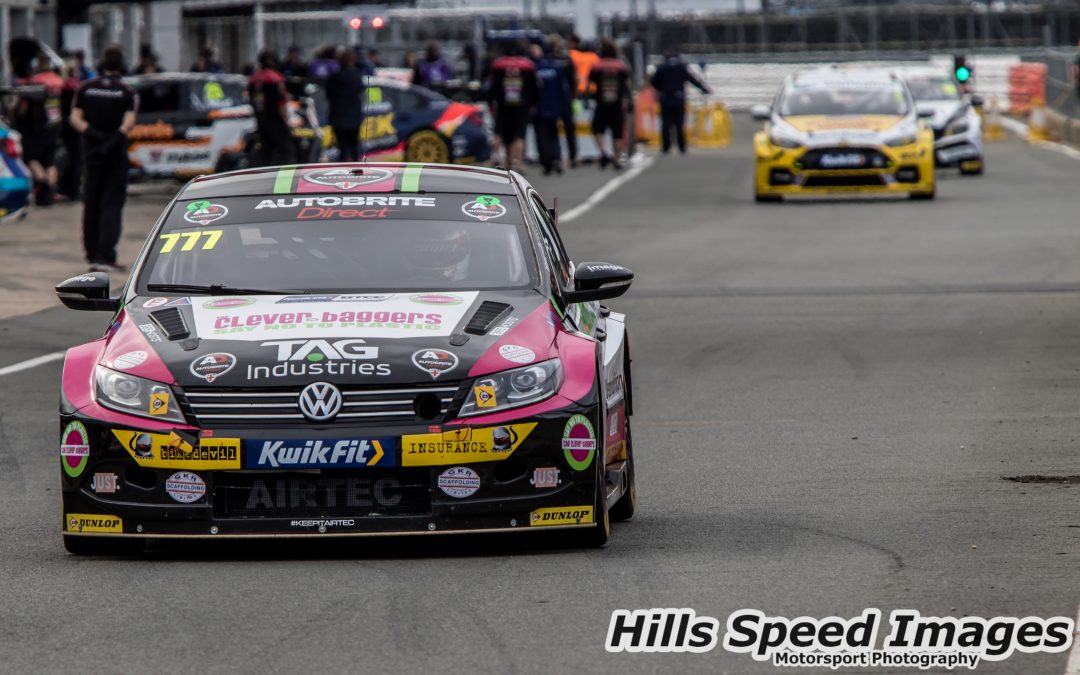 Michael Crees produced a heroic performance in treacherous conditions at Silverstone to secure a career-best ninth place finish in the Kwik Fit British Touring Car Championship this past weekend (September 28/29).

On what proved to be a momentous penultimate meeting of the year as a whole for Team HARD, Crees delivered a show-stealing drive to take a richly deserved second points finish of his maiden BTCC campaign.

After showing encouraging pace in Saturday’s two free practice sessions in his Volkswagen CC, the 35-year-old delivered a hugely encouraging qualifying performance to secure 24th on the grid for race one.

Despite the aid of a tow, which is crucial around the 1.6-mile National circuit in increasing top speeds and lap times, the Premier Contract Supplies and Burlington Bathrooms sponsored driver finished within half a second of pole position – underlining the constant improvements he is making.

Following heavy overnight and morning rain, all eyes were on the skies when it came to tyre strategy for the opening encounter of the weekend. With light rain falling minutes before lights out, Crees elected to roll the dice and switch to wet weather tyres – the only one on the grid to do so.

Unfortunately, the rain subsided quickly and left the Volkswagen driver forced to return to the pit-lane for slick tyres before lights out. Rejoining at the back, Crees’ misfortune sadly continued as an alternator failure saw him return to the garage, bringing his race to a premature end.

Starting at the back of the grid for race two, Crees showcased his overtaking prowess in what proved to be an action-packed encounter. Heavy rain teamed with a safety car towards the latter stages made it a race of attrition – with the former two-time Ginetta champion revelling in the conditions.

Scything his way through the order, the Geberit UK, Hansgrohe, DPC Group and DDS Demolition backed driver powered his way into 19th, but couldn’t go any further due to a red flag bringing proceedings to an early end.

Crees’ crowning glory came in an unpredictable reverse grid encounter, which started with all cars on slick tyres. Conditions soon began to deteriorate however and a change to wet tyres became paramount, with Crees pitting on lap four.

Rejoining at the back of the pack, he joined Jason Plato, Colin Turkington and Andrew Jordan in the fighting towards the front. Utilising the added grip he had over the slick-shod cars ahead, he matched the pace of the three former champions as he climbed the order.

Michael Crees: “What a weekend! Race three was one of the most amazing races I’ve ever been involved in and to come home ninth honestly feels like a win – it has been a weekend to remember for the team as a whole.

“We had great pace as soon as we hit the track and we have just worked on making improvements every time I’ve been behind the wheel. I was a little gutted that the red flag came out in race two because I was making great progress, but that set us up for race three.

“As soon as the rain started to fall I was straight in the pits and suddenly I was around the likes of Plato, Jordan and Turkington. I just stuck with them and went with them and we brought it home ninth, which is unbelievable.

“To finish in the top ten at this level and in those conditions is amazing and I have to thank the whole team and all of my loyal sponsors. This gives us plenty of momentum heading into the season finale in a couple of weeks.”

Crees’ maiden Kwik Fit British Touring Car Championship campaign will draw to a close in under two weeks’ time, as the series returns to his home circuit of Brands Hatch to sign off the 2019 season around the iconic Grand Prix layout.