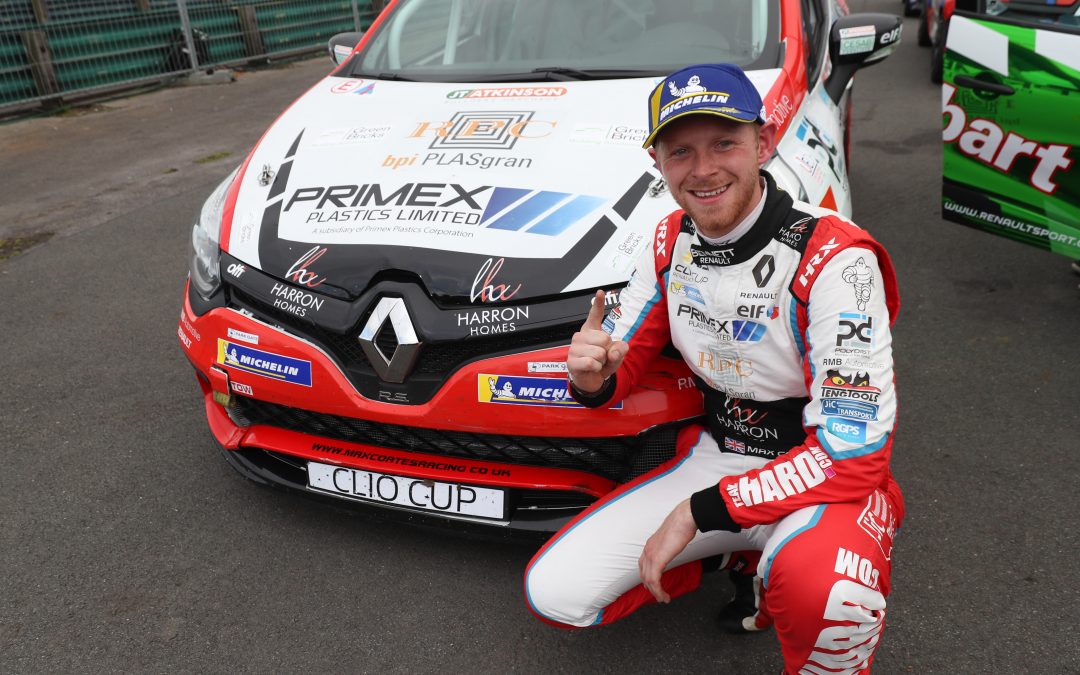 Yorkshireman Max Coates took an emphatic double victory at his home circuit, Croft, at the weekend in the Renault UK Clio Cup.  Watched on by more than one hundred sponsor guests he was the man to beat.

Hailing from Scorton, just five miles from North Yorkshire’s premier motorsport venue Coates needed a strong weekend to put his championship challenge back on track.  After a challenging test day on Friday he broke the circuit lap record on Saturday morning during qualifying, putting his Primex Plastics backed car in pole position for both of the weekend’s races.

Race one was held in wet conditions which changed minutes before the race.  His Team-HARD mechanics did a quick change to wet tires and set-up which worked well.  He made a good start and put a small gap over his nearest rival gradually pulling away in the early laps.  His opponent then spun leaving Max in his RPC bpi PLASgran sponsored car over twenty seconds in front at the chequered flag.

On a dry circuit Coates again started from pole position in-front of a capacity crowd on Sunday, challenged at turn one he managed to hold on to the lead.  As the race developed his nearest rival lunged past on the entry to the fast ‘Sunny In’ corner, however his fellow competitor had just received a ten second jump start penalty which promoted the RMB Automotive and Bennett Renault backed driver back into the lead.  He then knew sitting in second place would be enough to take the win with a huge crowd of local motor racing fans watching on Coates crossed the line to take the second win of the weekend and extend his lead in the championship*.

It was also a significant weekend for the racing driver as his sponsors RMB Automotive launched a limited-edition Max Coates 71 Renault Clio road car.  He also had another ten sponsors joining him at the weekend through his sponsor a tyre scheme.

Coates said, “What a weekend, two poles, two wins, the fastest ever lap in a Renault Clio, 160 guests, 10 new sponsors and a new road car in my name.  I’ve loved every second of it and I’m so grateful for the support I’ve had from my team, sponsors, family, friends and supporters.  Saturday’s result was particularly pleasing to have such a big lead at the flag but the cheer on the podium on Sunday was probably the highlight for me.  Thank you to everyone who made it a weekend to remember.”

The championship now heads to Oulton Park in Cheshire, where Max won last year.  He will be hopeful of more race wins in his quest to become the 2019 champion.  In between Coates will also compete in this weekend’s races of the Britcar Endurance Championship at Oulton Park and the TCR UK / Touring Car Trophy races at Donington Park for the DAT Racing team.

*when the championships dropped score rule is applied.