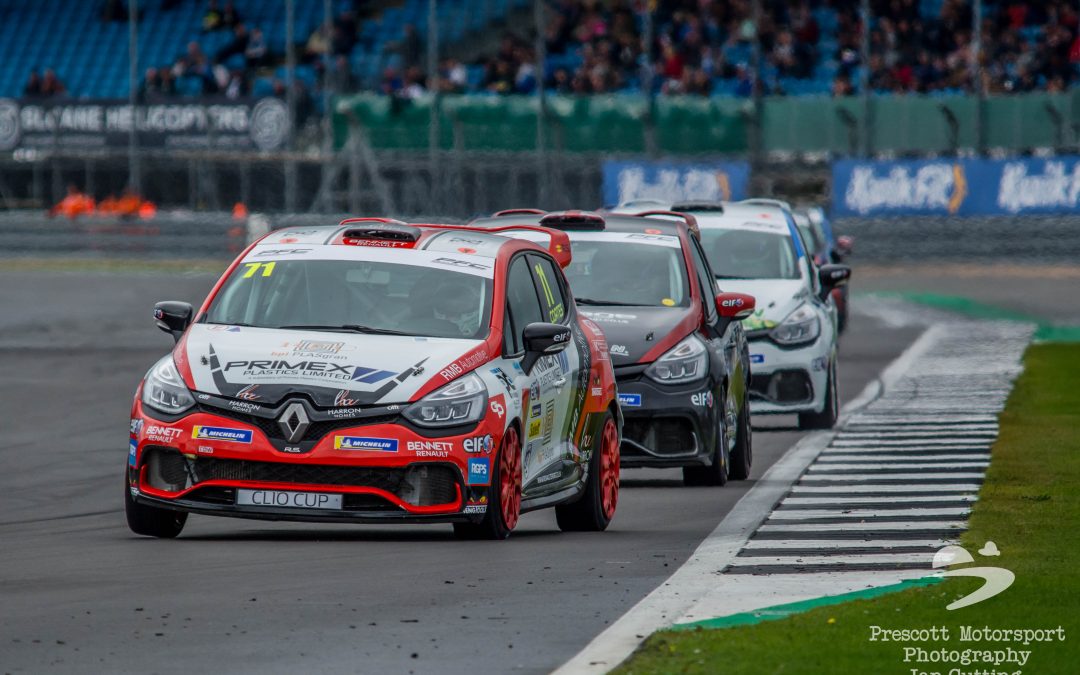 Max Coates arrived at the home of British Motorsport, Silverstone, as the Renault UK Clio Cup championship leader and after a terrific performance in Saturday’s race looked likely to head to the final round with an extended gap.  In typical Clio Cup fashion, the drama unfolded in Sunday’s live televised race on ITV4.

The Primex Plastics backed driver had looked fast in pre-event testing in both conditions on the Friday.  Qualifying was closely fought and Coates secured 3rd on the grid for both races, just a position behind his title rival Jack Young.

Coates settled into race one and sat 3rd in the RPC bpi PLASgran car during the race’s early laps.  By mid-race distance he began to attack, his chief championship rival just a position ahead. The Polydist sponsored driver found himself being slowed down and ‘backed-up’ into the chasing pack but he found his way through to 2nd place and was followed through by team-mate Jamie Bond.  The Coates, Young and Bond trio continued to battle to the end of the race, with Coates finishing 2nd and extending his championship lead to 6 points.

Broadcast live on ITV4 Max found himself in an early race three-way tussle for the lead, including Young, his championship rival.  Max, in his Harron Homes backed car was the main charger in the pack and found his way into the lead briefly at turn one before the cars went four abreast into the second complex of corners.  Max kept the pressure on and got back to 2nd and pulled the leader back in.  The RMB Automotive and Bennett Renault backed driver made a move for the lead at turn one but remained 2nd and came under attack from behind.  Unfortunately, Max was hit into the gravel entering Brooklands corner as another driver failed in their attempt to overtake.  With help from the supporting marshals Max was able to re-join the race, albeit with a damaged car and only two laps remaining. He crossed the line in 11th place giving him 5 points towards his championship challenge, a 6-point lead turned into a 15-point deficit.

Afterwards Coates said, “After such a promising race one and strong pace in race two I’m devastated with how the second race has ended.  Someone else’s mistake has cost me not only a podium but the lead of the championship at such a pivotal time in the season.  I’m more determined than ever to overturn this mis-fortune and come back to Brands Hatch in just over a weeks’ time to put on the best performance of my racing career. “

Silverstone’s races can be watched back via the BTCC ITV Motorsport website; https://www.itv.com/btcc/races/btcc-2019-silverstone-race-action. The Clio Cup will conclude at Brands Hatch, Kent, on the 12th and 13th of October.  Coates will need race wins to put him in a position to win the championship.  He will qualify and have his first race on Saturday afternoon, both sessions can be followed via TSL Live Timing.  The season finale in which the championship is likely to be decided will be screened live on ITV4, at 12:45 on the Sunday afternoon.