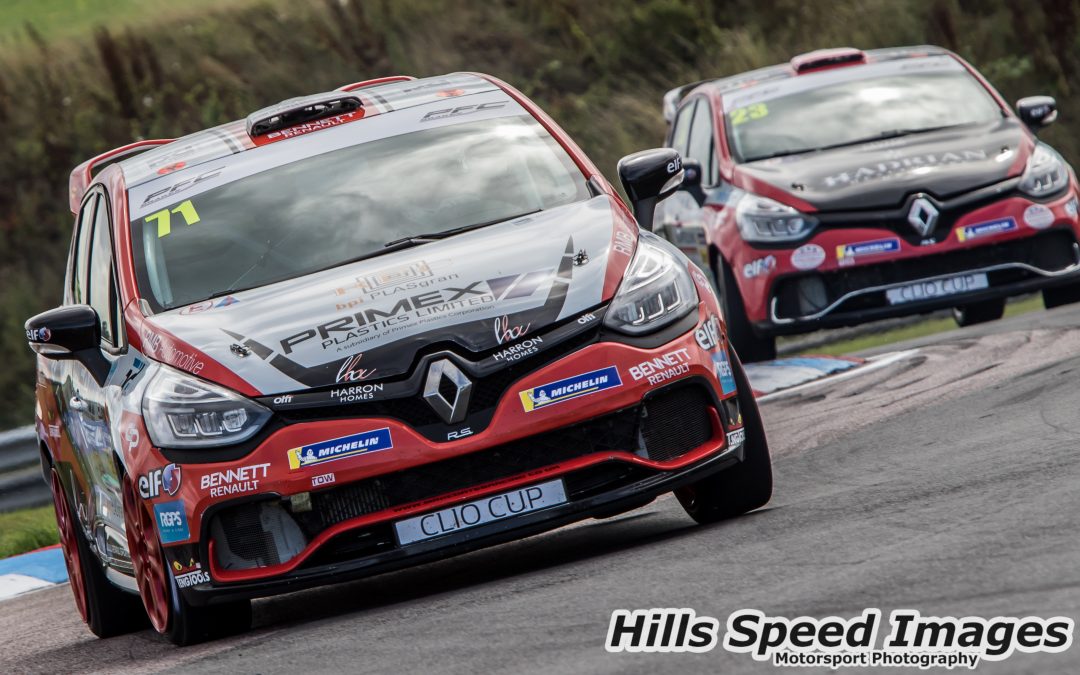 Max Coates went into event number six of the Renault UK Clio Cup with a six point championship advantage and left with exactly the same gap, however every lap at the UK’s fastest motor racing venue was full of action.

The Primex Plastics backed driver showed his pace in qualifying, taking 2nd on the grid for race one and pole for race two.

In race one the RPC bpi PLASgran car was embroiled in a five way tussle for the lead with positions swapped at almost every corner. Coates crossed the line in second but was initially promoted to 1st due to a jump start penalty for the winner on the road. Subsequently Coates was given a 0.1 second penalty for cutting the chicane and gaining an unfair advantage, meaning he took 2nd place.

Race two, live on ITV4, continued in a similar fashion with more wheel to wheel racing, the Clio Cup action ranking among the best of the BTCC event renowned for its close racing. Coates, starting from pole position in his Harron Homes and Polydist sponsored car, was the early race leader which swapped between himself, championship rival Jack Young and Ben Colburn. The rest of the field were in hot pursuit and with two laps remaining any one of five cars were in a position to take the win.  Coates in the RMB Automotive car lead into the last lap and final chicane but a clash sent him spinning through the foam barriers into retirement, just a short run from the finish line. Coates car wasn’t able to move and unfortunately, he had to watch the win slip away.  After post-race penalties Coates’ Team HARD. Racing stablemate Ethan Hammerton took his first race win.

Afterwards Coates said, “I’m gutted not to have taken a win this weekend after showing such good speed in practice, qualifying and both races, especially after leading to the final corner in race two. The two races this weekend have been first draw entertainment for the drivers, teams and fans, it’s just a shame I wasn’t able to lift a first place trophy at the end.”

Thruxton’s races can be watched back via the BTCC ITV Motorsport website; https://www.itv.com/btcc/races/btcc-2019-thruxton-race-action. The Clio Cup will continue at Knockhill, Fife on the 14th and 15th of September, a new circuit to the championship after several seasons missing the popular Scottish venue.  Coates will qualify on the Saturday before round thirteen takes place on Saturday afternoon, both sessions can be followed via TSL Live Timing.  The second race of the weekend, round fourteen, will be screened live on ITV4, at 2:55pm on the Sunday afternoon.