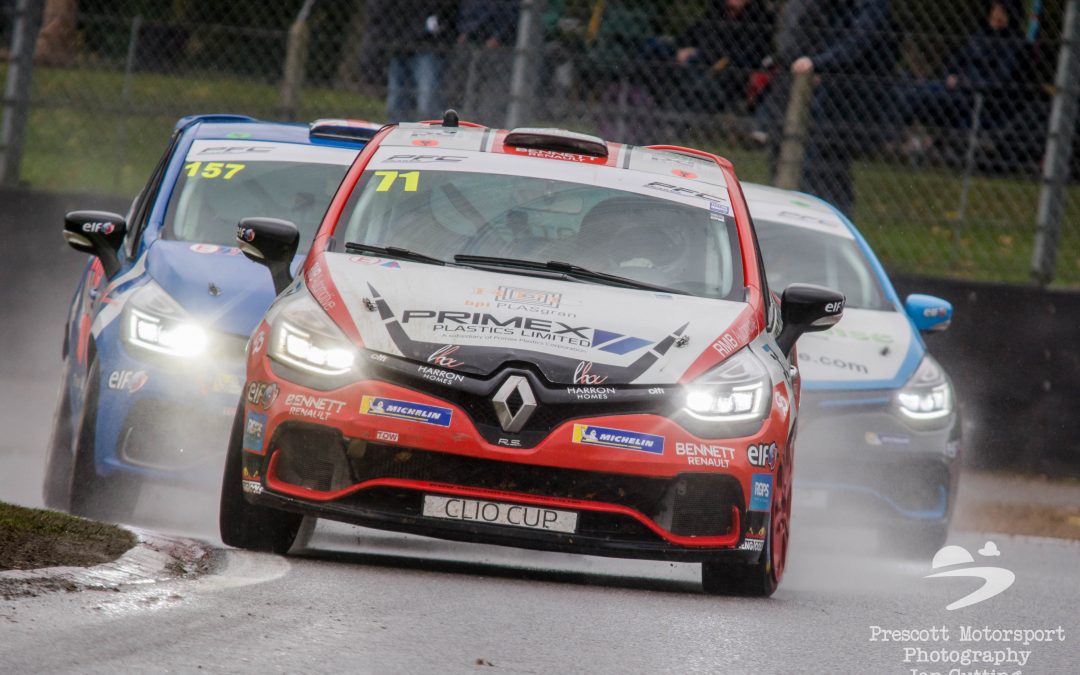 The Renault UK Clio Cup has been a mainstay of the British Motorsport scene for over 20 years, it’s 2019 championship has been one of the most exciting in its illustrious history. Yorkshireman Max Coates has played a central role in its final season after a yearlong title battle and rivalry with Ulsterman Jack Young.

Entering the final round at Brands Hatch in Kent, Primex Plastics sponsored Coates sat 15 points behind Young in the standings. The previous round at Silverstone provided the latest twist in the Coates-Young championship battle, the Yorkshireman ending the second race in the gravel trap after contact from his ex-team mate. Few thought the drama would, or could, escalate further at Brands Hatch.

But that it did and it all started in Qualifying. The rain-hit session started damp with all cars starting on wet Michelin tyres. The track dried quickly and Coates pitted to make his RPC bpi PLASgran car slick shod whilst his rival continued on wet tyres. After two laps Coates was on track to set the fastest lap of the session by some margin, but as he entered the final corner of the historic GP layout at Brands Hatch, he was greeted by a red flag halting the session after another driver had finished up in the gravel. With further rain afterwards the Polydist sponsored drivers times were only good enough for 4th and 10th on the grid for the weekends two races. Meanwhile Young had scored 7th and 3rd. It meant Coates would likely out-score in race one and Young would in the championship deciding race two.

As Coates in his Harron Homes backed car pulled up to 4th position on the grid in race one he stalled, his clutch not clearing sufficiently to stop the car. Thankfully he got it restarted and was able to continue without further issues, however he crept away slowly. Under pressure from his championship rival Coates turned defence into attack and was the fastest car on the circuit, within a lap moving into 2nd place. He then began his advances on the early race leader and on lap 5 was on his rear bumper. A safety car intervention was needed to clear a car stricken in the gravel trap which halted the RMB Automotive and Bennett Renault backed drivers progress. He then lost a spot at the restart and despite his early race pace had to settle for 3rd place. The action didn’t end there, Young was given a drive-through penalty for overlapping at the safety car restart, a penalty he did not serve. He was handed a 30-second penalty after the race which meant Coates lead the championship once more, by just a single point, going into the final race of the season.

To the finale, Coates starting 10th was really on the back foot despite his points advantage. A strong opening lap meant he climbed 5 places only for an early race safety car to halt his progress. The intervention was lengthy, but at the restart Coates looked almost certain to gain another position, only for another safety car to be called. Coates backed out of the move but other drivers didn’t hear the message on the radio and he slipped back to 6th place. Again, the safety car period was lengthy leaving just 4 laps for Coates to overhaul Young’s advantage. Coates moved swiftly through to 2nd place in the final laps and had one lap to close and pass his rival to take the championship. By that point the gap was nearly 3 seconds which was just too big for Coates to overcome. 2nd in the race and 2nd in the championship, by just 5 points.

Afterwards an emotional Coates said, “I put everything I had into that last race but it just wasn’t to be. The safety car laps hampered my chances to move forward but when I had the opportunity to overtake I did, I couldn’t be happier with my drive today but I’m so disappointed not to have taken the title. It’s easy with hindsight to look back at where I could have found another 6 points this year, we’ve had plenty of set-backs and really any one of them could have made the difference.

I’d like to thank all of my sponsors, Team HARD. and all the people who work with me on my racing and the car itself for giving the me the opportunity to do this, without them I couldn’t have put this title fight together. Likewise this ends four years of racing in the Renault UK Clio Cup, a championship that has rejuvenated my racing career and without doubt shaped my life, I’d like to extend my thanks to all the staff involved in the series and anyone who has been involved in the last 4 years.”

UK Clio Cup Media Officer Carl McKellar said “For the 300,000 fans who have attended the events and the millions more watching ITV4’s live coverage of the action, the rivalry between Max Coates and Jack Young has been the most exciting of the season out of all the BTCC’s supporting categories.

“Similarly, in the media room, the press – even those there to cover the BTCC – often commented how they’d downed tools to watch the Max vs Jack show – a real highlight of their day!

“To win 7 races in a championship as competitive as the UK Clio Cup is a very rare feat but Max managed this – it’s a huge testament to his abilities and how he has matured into a great all-round performer during the past several years. His following is now many thousands and actually puts to shame that of many drivers in higher levels of the sport – including some in the headlining BTCC.”

The Brands Hatch races can be watched back via the ITV Hub or BTCC ITV Motorsport website; https://www.itv.com/btcc/races/btcc-2019-brands-hatch-gp-race-action. Coates will have at least another two races meetings this year, competing in the final round of the Britcar Endurance Championship this weekend at Oulton Park and at the Race of Remembrance on the 9th and 10th November at Anglesey.