Coates on top after Knockhill races 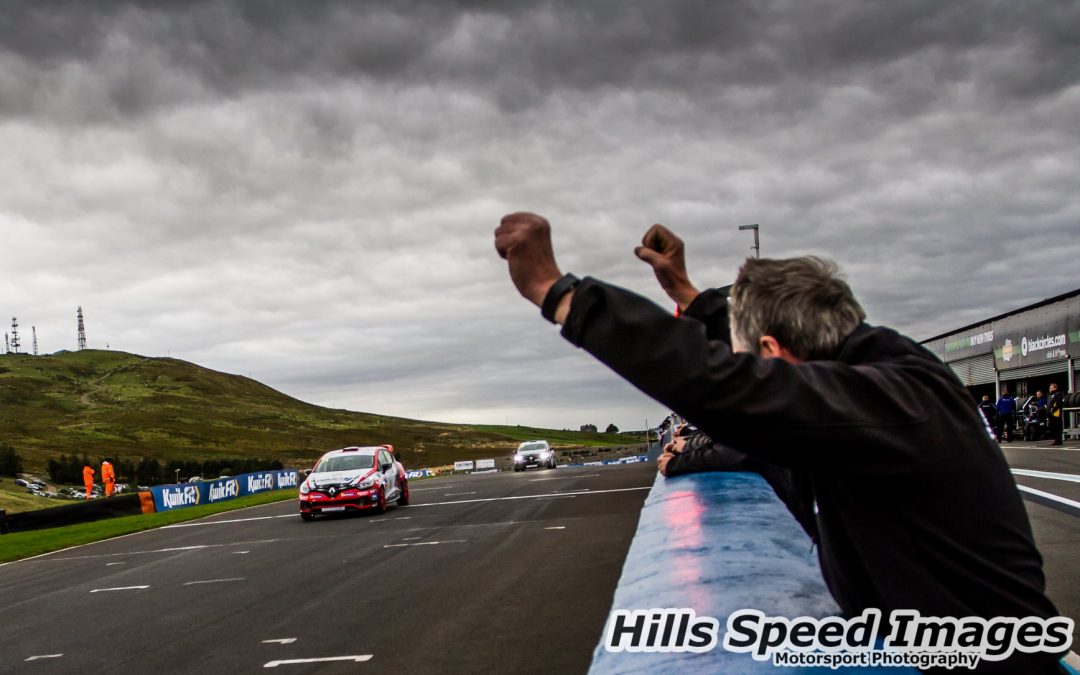 The Renault UK Clio Cup made it’s first trip to Knockhill in four years as Scorton’s Max Coates took to the track leading the championship by 6 points.  He had a successful weekend lifting trophy’s in both races.

The Primex Plastics backed driver took pole position for the weekends first race in a frantic qualifying session which was interrupted by a rain shower.  Coates had posted the fastest time of the session when the rain fell which meant both he, and everyone else, couldn’t go faster.  The rain came about 10 seconds too early for Coates who was on a lap capable of race two pole as well but couldn’t make his normal braking at the final corner.

In race one the RPC bpi PLASgran car got away well and built up a comfortable lead on the opening lap before a safety car effectively restarted the race.  Under pressure from his main championship rival, the Polydist sponsored driver remained calm and never put a wheel out of line to come home the winner by 6 tenths of a second.

In race two which was screened live on ITV4 Max in the Harron Homes backed car didn’t make the best of starts and immediately came under pressure for 2nd place.  On lap four he dropped a wheel on the gravel and lost his position falling back to 3rd.  Two laps later a tap into turn one sent him straight on and fortunately he held control and re-joined still in 3rd place.  He then began a charge back.  The car in front made an error as Max caught him in the RMB Automotive and Bennett Renault backed car, this put Max back into the runner up spot.  Max tried what he could in the final stages to regain the lost time to the leader but couldn’t make it back up, instead having to settle for 2nd.

Afterwards Coates said, “Qualifying and race one was brilliant and really showed our abilities to the full.  The lap in qualifying felt great and I carried that pace and consistency over into race one.  Despite the pressure I kept it smooth and was really happy with my performance.  Race two didn’t got to plan, my reaction to the lights was slow and it allowed Jack to get a gap.  The race didn’t really pan out for me from there so a second place was a good result.  The Team HARD Racing guys have done a great job this weekend and I’d like to thank my sponsors for the continued support in pursuit of the Renault UK Clio Cup title.”

Knockhill’s races can be watched back via the BTCC ITV Motorsport website; https://www.itv.com/btcc/races/btcc-2019-knockhill-race-action. The Clio Cup will continue at Silverstone, Northamptonshire on the 28th and 29th of September.  Coates will qualify on the Saturday before round fifteen takes place on Saturday afternoon, both sessions can be followed via TSL Live Timing.  The second race of the weekend, round sixteen, will be screened live on ITV4, at 13:40 on the Sunday afternoon.