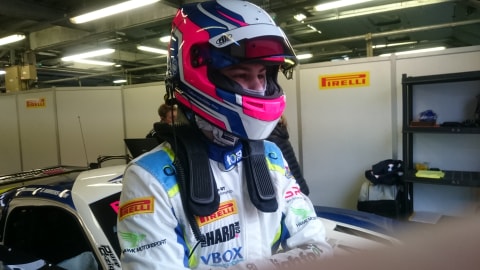 Team HARD. Racing are very pleased to announce that rising star Callum Hawkins Row will return to the Britcar Endurance Championship this weekend at the Silverstone GP round. Callum will be replacing Darron Lewis alongside regular driver Adam Hatfield as Darron is away on a family holiday.

Callum is no stranger to the Britcar championship having completed a full season in 2017 achieving multiple podiums and enjoying lots of successful race weekends showcasing his ever improving talent.

Callum will be at the wheel of a freshly built Ginetta G55 GT4 spec car and will have his first taste of the new machinery tomorrow during testing following a successful shakedown this afternoon with Adam at the wheel.

Callum has been competing in British GT so far this season and will have to adjust to the car that has no ABS or traction control unlike his 2018 GT4 Ginetta.

Tony Gilham said, “Callum has been an integral part of the team for a number of years now and it has been great to be part of his journey so far. He is a very special talent and is developing as a racing driver in all areas. We talk a lot about being the complete package in modern day motorsport and Callum has the ability to succeed at the very top of the ladder with an all round quality both on and off track. Im sure he will once again take this in his stride and form a very strong pairing with Adam who himself has been a revelation since joining team HARD.”

Callum added, “I am very much looking forward to working with Adam and being part of the Britcar championship again. I had a great year in 2017 and had a great weekend at Silverstone last year so cannot wait to get back out on the GP circuit. We won twice last year on this circuit so will be looking to build on that success and see what we can do this weekend in the new car. I love my racing and have been working very hard to improve so can’t wait to see how we get on against the other guys in our class.”