Bushell Rocks it up 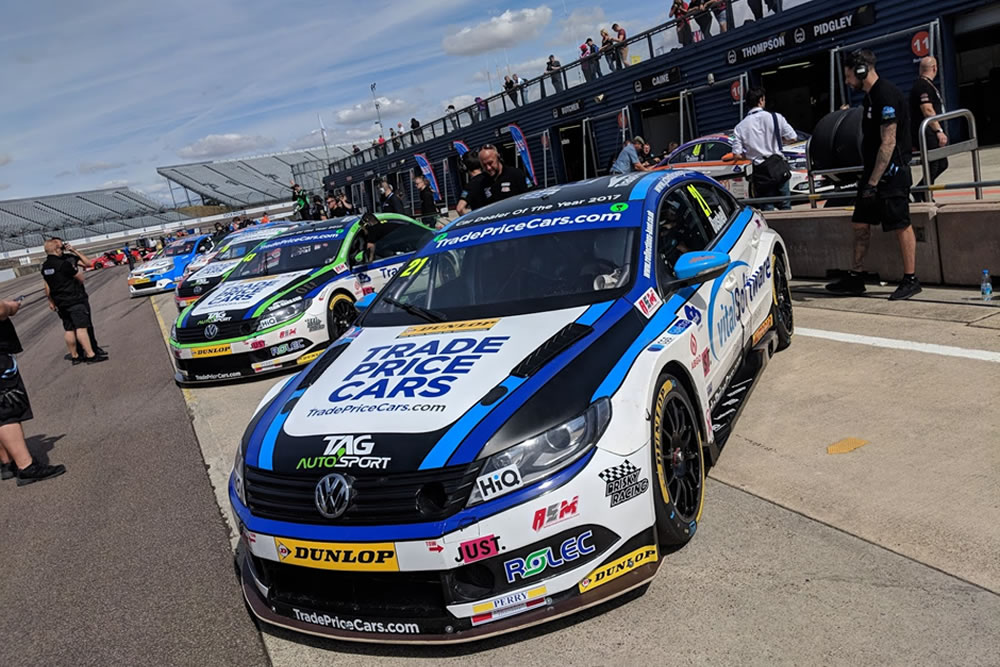 The final Saturday has taken place at Rockingham as the BTCC moves away from the Northamptonshire speed bowl. One last hurrah brings a new first this weekend as Mini Challenge and ex Clio Cup racer Ollie Pidgley joins the team. The debutant has taken the seat in the number 43 Trade Price Cars with Brisky Racing machine for the rest of the season.

There has been a sense of optimism, expectation and a splash of hope around the team since the summer break. At the last round at Snetterton the car showed flashes of speed in practice and in the races but qualifying was again our achilleas heel putting us on the back foot. It was vital for us to finally show our hand.
Here is the low-down driver by driver:

Mike Bushell – Trade Price Cars with Brisky Racing
This man has been on it all day long and it is no less than he deserves. Mike came down to Team HARD HQ on Tuesday to set his car up and make sure everything was in tip top shape. You certainty can’t questions his commitment to the cause or the reigning Clio Cup’s driving talent; a recipe for a good weekend perhaps?
Free Practice 1 – P6 1:23.478
Free Practice 2 – P2 1:22.836
Qualifying – P4 1.23.163
“The car has been on rails all day. We had the pace at Snetterton but we unable to use it after a change in setup for qualifying went south. From the first lap here at Rockingham I knew we were onto something. I have a good feeling in the car now and I can really push it to the limit. I was pretty speechless when I got out of the car after qualifying. Our previous best qualifying result has been a 14th which really shows how far we’ve come.
I’d like to thank my sponsors and the team who have put everything into getting this car on the pace of the front runners. We are in a fantastic position to score some big points tomorrow and of course we will be chasing the win in race 1!” Mike Bushell

Ollie Pidgley – Trade Price Cars with Brisky Racing
Free Practice 1 – P28 1:25.851
Free Practice 2 – P31 1:25.273
Qualifying – P31 1:24.793
“We knew it was going to be difficult today but FP1 was actually really positive. FP2 I was a little bit downhearted as we didn’t find as much time as I would have hoped for. Myself and Yahor (race engineer) made loads of changes to the car before qualifying and we went a bunch quicker again for qualifying. The BTCC is a completely different experience in terms of heating the tyres and using them effectively as they go off so quickly. This has literally been my first day in the car so all of that will come. I’m loving being here and it’s still sinking in. There is so much to do in the BTCC to extract the maximum from the car but like I said I’m loving every second.
We’ve got the 45Kg of ballast on the car which is frustrating but if it rains the effects will be negated. I’m looking forward to getting stuck in and just spending more time out on track!” Ollie Pidgley

Bobby Thompson – Trade Price Cars with Team HARD
Free Practice 1 – P21 1:24.159
Free Practice 2 – P9 1:23.466
Qualifying – P18 1:23.475
“In FP1 Bobby had a gearbox leak, it wasn’t bad, but it was enough to end the session early. It was the gearbox pump hose itself that cracked so the lads managed to get that ready for FP2. The car ran well in FP2 and Bobby was able to really show his pace with a final position of P9 on old tyres. The car was prepped and ready for qualifying but at the last minute we had to change the alternator which was a blow as we lost the first 5 minutes of the qualifying session.
Qualifying didn’t go to plan for Bobby, he was expecting more, and he had more in himself, but he didn’t have any luck on his size. He had further trouble when the sensor on the gear pot came lose, meaning he couldn’t see what gear he was in or what gear he should be in. This obviously costing time over a lap. I’m excited to see how Bobby does tomorrow as I really believe he can match the pace of Mike up front.” Jamie (Head Mechanic)

Michael Caine – Trade Price Cars with Team HARD
Free Practice 1 – P26 1:24.488
Free Practice 2 – P19 1:23.872
Qualifying – P27 1:23.789
“It’s been an interesting day for Cainey. We’ve played around with the setup of the car in each session to try and find some more performance. The pace has been good in sector 2 and 3 but he’s been lacking speed through the long first corner and the rest of sector 1. Whatever setup we tried nothing seemed to work for him. On a positive note, we’ve just finished comparing his data with the rest of the drivers and we are 90% sure we have found the issue so tomorrow it’s game on!” Tom (Number 1 Mechanic)