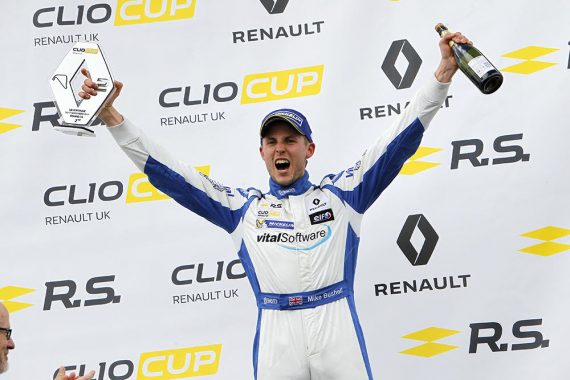 It is with regret that Mike Bushell will not be racing in the British Touring Car Championship in 2019 due to both personal and budget reasons. Mike, who debuted with the team last season claimed a Jack Sears trophy win and finished the 2018 season as the teams’ top points scorer thanks to a string of consistent points finishes over the second half of the season.

However, that doesn’t mean that you won’t see Mike back in on the TOCA package in 2019 as we are delighted to announce that Mike will be entering in the final season of the Renault UK Clio Cup.

Tony Gilham, Managing Director of Team HARD. Racing had this to say on the situation. “I am absolutely gutted that Mike can’t be on the BTCC grid with us for 2019. He is one of the main reasons for our turn in form during the second half of the 2018 season; having a brilliant weekend at Rockingham and showing everyone the true pace of the Volkswagen CC.

Mike will continue to be a fantastic ambassador for us, proving to be to a favourite with fans, our partners and the team. His contribution stems not only his performance on track, but also off it. Mike has been our go to man over the winter to perform hot laps for our corporate track days as well as helping to develop the car, righting the wrongs of the beginning of 2018. He has put us in a very good place for this season.

I’m really sorry to see the problems that Mike has had over the last few months but we have been trying everything in our power to help him get on the grid for this season and I am delighted that he will be back in the Clio Cup for this season, looking for a third title.

A great person and a great friend, Mike it was imperative that we found a space within our racing ranks for Mike, he is Team HARD through and through.”

The 2014 and 2017 Clio Cup champion Mike Bushell commented: “The plan had been a second season with Team HARD. in the British Touring Car Championship but a few sponsorship deals haven’t worked out so it’s back to the Clio Cup.

“It’s similar to the move I made after my first season in the BTCC in 2015 and I’ve always said if I can’t race in touring cars then the Clio Cup is the best place for a driver to be.

“I’ve had no hesitation in making this decision – the professionalism and type of racing means that, as a driver, you stay sharp and you know the cars are equal.

Plus, of course, there’s all the exposure with it being at the BTCC’s events which means huge bang for your buck.

“While of course I’d love to have been staying on the BTCC grid, this is the best alternative to remind people of how competitive I am and to write my own piece of history in one of the best race championships.”

The team have been working hard to find a solution in time for the forthcoming British Touring Car Championship on March 27th. Mikes replacement has put pen to paper with further details being released imminently.