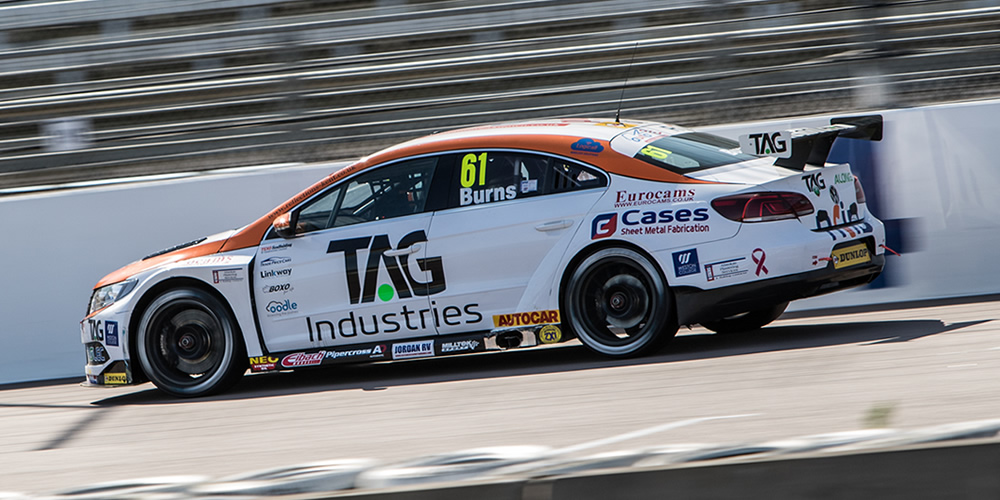 Will Burns saw a race three incident out of his control spoil what was otherwise a promising day of racing in the latest rounds of the Dunlop MSA British Touring Car Championship at Rockingham this past weekend (26/27 August).

Burns headed into the meeting having experienced the true highs and lows of motorsport in the previous two outings, with a first ever visit to the BTCC podium at Snetterton followed by a huge 100mph+ accident at Knockhill during his toughest meeting of the season so far.

Fortunately the repair job following that incident was not as big as initially feared, however with just two weeks in-between meetings it still required a fantastic job from Team HARD to ensure his Auto Aid/RCIB Insurance Racing Volkswagen CC was on the grid at Rockingham.

Burns had a strong track record at the circuit with five consecutive podium finishes there during his last two visits in the Michelin Ginetta GT4 Supercup, however he wouldn’t be able to show his true pace in Saturday’s two free practice sessions as he battled issues with the car.

Some hard work with his Team HARD engineers meant the car was much stronger come qualifying later that afternoon, however Burns would see his best lap time unfairly removed for a perceived track limits violation, which ultimately left him 30th overall on the timesheets.

That meant the Weston-Super-Mare racer faced an uphill struggle come race day, however Burns would get his head down and produce a promising display in the opening race, which took place in front of a bumper crowd under the sweltering Northamptonshire sunshine.

On the favourable medium compound tyres, Burns would make steady progress throughout the race and despite a couple of rivals trying to derail his challenge with contact, the 27 year old continued to produce impressive lap-times on his way to 23rd place at the finish.

In race two, the Cases Ltd, Eurocams and Weston College backed driver would replicate that strong pace despite running the option hard tyres, with a battling display seeing him fight back after losing some ground and take the chequered flag in 21st position.

Back on the medium tyres for the final race, Burns was determined to break into the top twenty but unfortunately he would have no opportunity to showcase his potential once again as contact from another driver ended his race in dramatic fashion on the opening lap.

Sticking to the inside of the circuit coming out of the Tarzan hairpin, the Somerset racer received heavy contact to the rear which speared him across the track into another car, and with broken steering and suspension, he was powerless to prevent more contact at the next corner.

Burns would eventually nurse the car back to the pitlane, with the team left to assess another extensive repair job for the car ahead of the penultimate meeting of the season in three weeks’ time (16/17 September) around the Silverstone national circuit.

Will Burns: “This weekend really feels like an opportunity lost for us to get into the points positions, and a lot of that came down to the harsh track limits penalty we got in qualifying, which meant instead of starting closer to the top twenty, we were at the back of the grid.

“It’s always an absolute dogfight to try and make any progress from there, but we were able to produce strong pace on both the medium and the hard compound tyres in the first two races, and from where I started I was pleased to finish in P23 and P21.

“Unfortunately despite my best efforts to steer clear of any danger, another driver managed to get me involved in a big incident in race three which has caused more big damage to the car. Hopefully the luck might turn in our favour at Silverstone!”