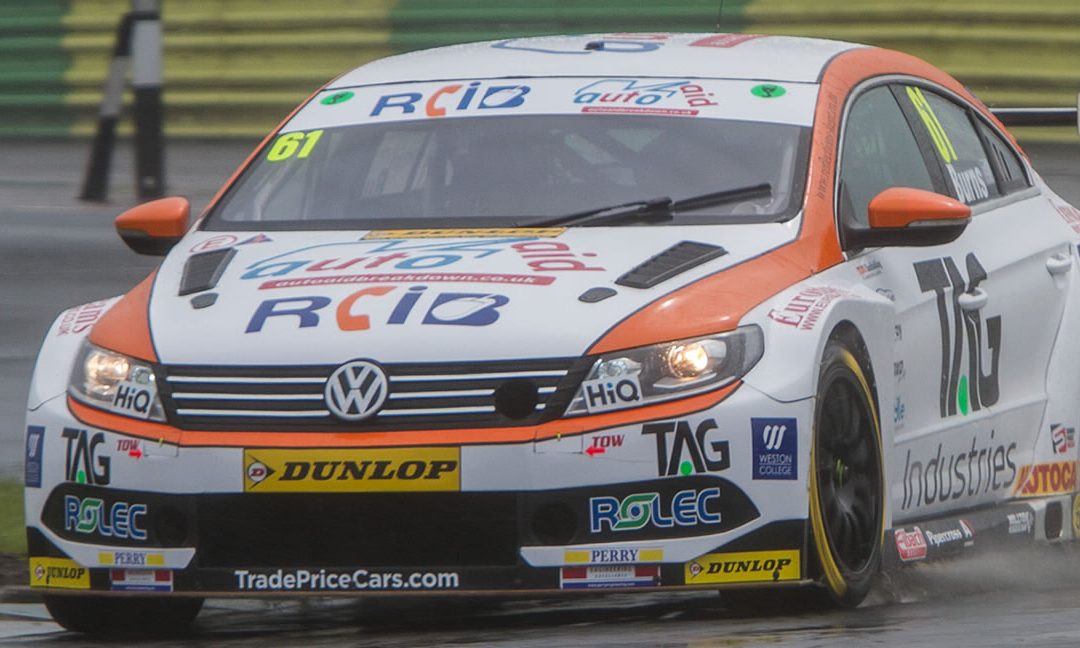 Will Burns secured the best qualifying and race results of his Dunlop MSA British Touring Car Championship career so far as he brought the first half of his maiden season to a close with some promising performances at Croft this past weekend (10/11 June).

Burns produced competitive pace in both wet and dry conditions across the meeting in his Auto Aid/RCIB Insurance Racing Volkswagen CC, but would unfortunately see his challenge for a breakthrough overall points finish derailed by a pair of retirements.

Returning to Croft for the first time since 2015, Burns would have to tackle the Yorkshire circuit in the wet for the first time on Saturday, with the two free practice sessions giving him the chance to acclimatise to the tricky conditions ahead of qualifying.

An impressive showing in the second outing saw the Weston-Super-Mare racer emerge as the fastest of the Team HARD contenders and filled him with confidence ahead of qualifying, however that session would prove to be short-lived affair due to a massive incident.

Oil dropped on the already slippery circuit would result in no less than ten cars crashing off circuit, with Burns extremely lucky not to get caught up himself. With the session red flagged and not restarted, the exploratory lap times in the opening nine minutes would form the result.

Burns therefore ended the session twentieth overall on the timesheets, before subsequent driver withdrawals following the incident would put him a best ever eighteenth on the grid for race one, albeit not in the circumstances he would have wanted.

Much improved weather conditions greeted the Cases Ltd, Eurocams and Weston College supported driver as he took to the grid for Sunday’s opening encounter, however a frustrating start to proceedings would see him suffer contact at the final hairpin on lap one.

Shoved back to 21st position, Burns would immediately fight back though and moved back up to eighteenth on the next tour, before settling into the thick of a huge battle at the bottom of the top twenty for the remainder of an action-packed race.

Knocked back to twentieth four laps from the end, Burns would produce some impressive overtaking moves in the final couple of laps to finish in seventeenth position – a result that would prove to be the highlight of an otherwise nightmare day for the Somerset racer.

Race two lasted five laps for Burns before an oil cooler failure forced him to retire in the pitlane, while race three would only last two corners before heavy contact from another car broke his wheel and forced him to pull off circuit into retirement again.

Despite the two disappointments, the 26 year old still heads into the championship’s summer break in buoyant mood ahead of the important two-day Dunlop tyre test at Snetterton on 5/6 July, before the next rounds of the season at the same circuit on 29/30 July.

Will Burns: “There’s been plenty of highs and lows this weekend, so to produce some good performances in both wet and dry conditions is particularly pleasing, especially around a circuit that I don’t have much experience around.

“While I qualified well, it didn’t come in the circumstances we would have wanted. It was a horrific incident and I wish all the best to Luke Davenport, Aron Taylor-Smith and Jeff Smith in their recoveries.

“I showed that we do have pace in FP2, finishing quicker than my team-mates, and then again in race one when I was really pleased to fight through to seventeenth, but luck seemed to desert us for the rest of the day.

“I was confident we could have been challenging for my first championship points, but it wasn’t our day. I’ll bounce back for Snetterton and I think the two-day test will be crucial to set us up for more progress in the second half of the year.”