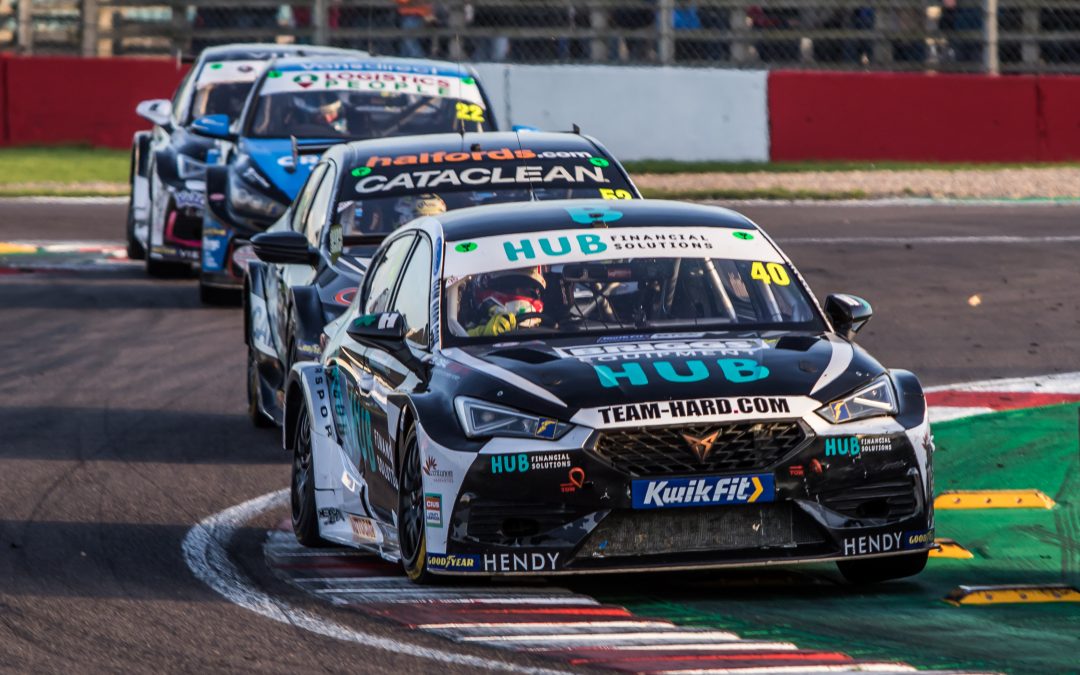 Árón Taylor-Smith led the line for the team on Saturday, posting competitive times in practice, including P6 in FP2, and qualifying highest despite the obvious engine issues. In what would become normality for Árón on Sunday, Race 1 was full of tidy battles and clean overtakes. Once again, the straight-line speed cost him further positions. Race 2 was almost a carbon copy. In Race 3, the horsepower finally matched the classy overtakes, and alongside Jack Goff, the duo battled with double-winner Gordon Shedden and third-place qualifier Jason Plato on merit, securing deserved points for the team.

Now with a car under him that he enjoys, Árón is eyeing up a triple-points haul at Brands in two weeks.

“Raceday was full of progression. I’m always happy when I leave a weekend with the car feeling better than it was when we arrived, and I certainly feel that. I think we were unlucky in qualifying. We didn’t have the engine package optimised which put us on the back foot in Race 1 and 2, battling with other people, but we made significant progress with the chassis for Race 3 and were in a position to fight.

“Our relative performance with the frontrunners improved by around 80% from where it was at the start of Sunday. We’ve confirmed the root for how we should start the car, and for that, I’m very happy.

“We’re in a good place on our way to Brands – it’s nice that it’s the home race for Team HARD. I hope to put on a show for the hospitality that will be jam-packed with guests. I’m full of optimism.” 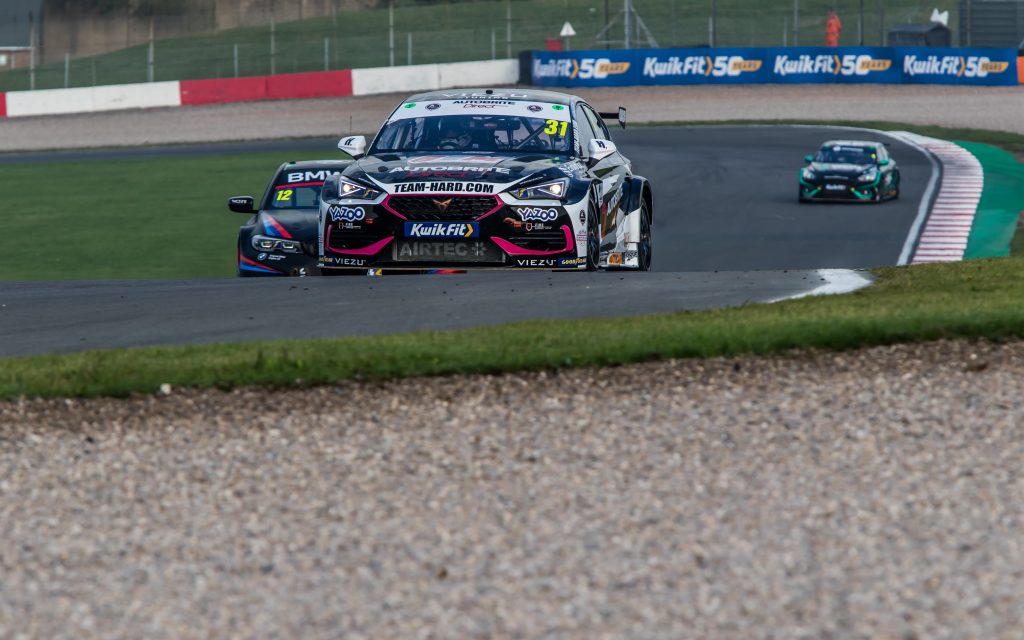 Jack Goff sadly brought the mechanical gremlins from recent rounds with him to Donington Park, placing lowly with poor speed in the straights. Despite the poor qualifying session, which Jack claimed was the worst of his BTCC career, Sunday’s races proved more fruitful. The opening encounter saw some movement up the order but was nothing compared to the other races. Thanks to some expert tweaking by his engineers and Swindon, Jack battled with fellow competitors and secured two point-paying finishes. With the return to form seen in the first half of the season, Jack is eyeing even better tussles come the closer at Brands Hatch GP.

“We started the weekend off in a really bad place – we couldn’t find the problem with the car that we’ve had for the past few rounds. No matter what we did it just wouldn’t get fixed, so we knew it was a fundamental issue that was then found before Race 2. The car was then transformed. We’re now in a position which I feel we should be, able to race around the top 10 with good pace.

“Now I’m positive heading to Brands Hatch. It’s a shame we solved the issue towards the end of the season, but we found it and that’s the most important thing.” 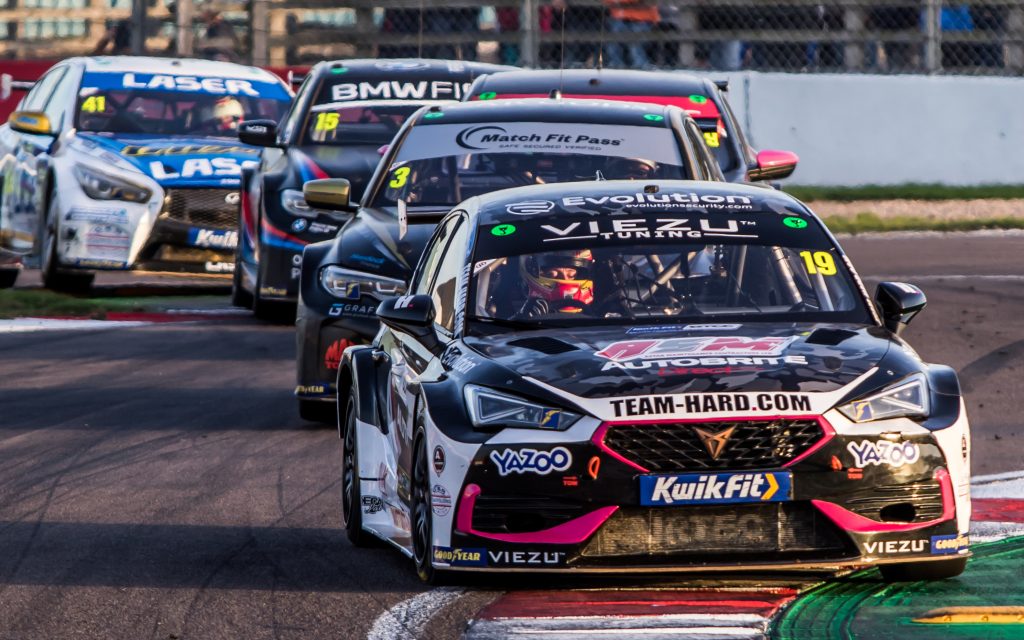 Constantly improving since his arrival to touring cars midway through the season, Jack Mitchell gained yet more experience at Donington. Finishing FP2 in fifth, and carrying the strong lap time over to qualifying, Jack sadly succumbed to the waning engine troubles and found it tough to make any significant progress.

Race 2 welcomed the improved powertrain, and Jack crossed the line in P19 – his best finish in the BTCC. Further improvements seemed a certainty during the early battles of Race 3, but an unlucky bit of contact during a heated tussle with multiple cars saw Jack drop back a few positions. With the improved motor in the CUPRA, Jack’s first points look likely to come sooner rather than later.

“It wasn’t a bad weekend. After qualifying, I thought my pace was good against my teammates’, however, we lacked the straight-line speed in Race 1, which Swindon thankfully fixed for Race 2 and gave us more firepower. I finished P19, which is my best result in the BTCC so far.

“In Race 3, I was hoping for some improvements on that. However, the pack was so tight and it was hard to make some progress through. I got pushed wide and dropped back four places, so the rest of the race was about bringing it home.

“I feel as if I’ve learned a lot race craft wise this weekend and really got stuck in what I needed to do after five years in GT cars. It’s another learning curve and I hope to put these points into action at Brands and break into the top 15.” 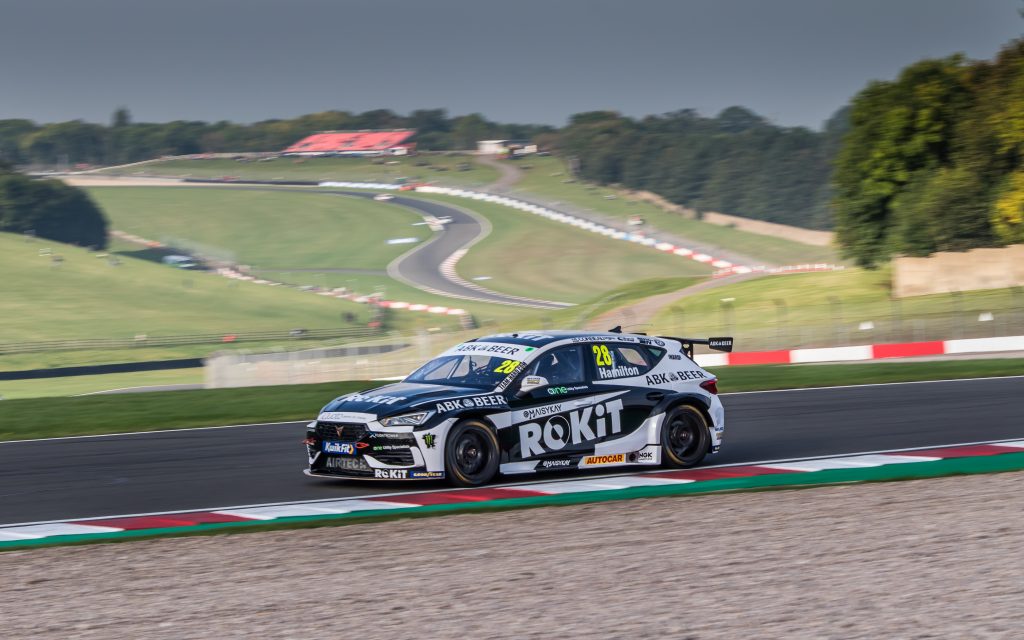 Nic Hamilton’s pace was consistent throughout Saturday’s sessions and gave him a great platform to race from come Sunday. Race 1 was a quiet and clean affair, with solid lap times aplenty. However, Race 2 almost finished as soon as it had started, with Nic pitting on the journey to the grid with driveshaft problems. A monumental effort by the team ensured his place in the race with seconds to spare and was greeted with cheers from the crowd outside the garage. The final race was another mistake-free run on a new set-up with one eye towards Brands and a positive end to another inspiring season.

“I approached this round with confidence as when we tested here at Donington in the winter we found mega pace in the Cupra. This weekend started out well with competitive pace throughout FP1, FP2, and qualifying. However, bad luck followed us into the races; the driveshaft popped out on the way to the grid for race 2 which put us on the back foot.

“I finished races 1 and 3 with similar, positive feelings regarding the progression of the car, the main hurdle being down on power.

“The trials and tribulations are what we love so much about the BTCC! With each meeting, we’re bringing the car closer to where it needs to be and we’re in good stead for the final round at Brands Hatch GP, where I scored my maiden points in the championship. I’m looking forward to a positive finish to the season there.”