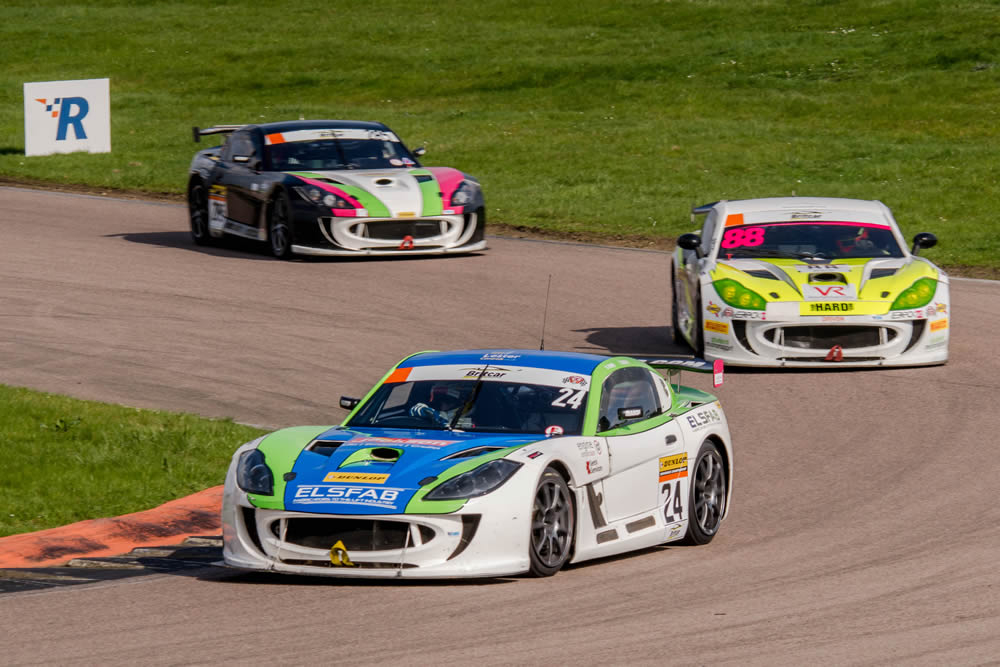 Britcar Endurance at Rockingham brought us an eventful time on a warm and sunny day.

With three pairings of Simon Rudd/Tom Barley (#24), Adam Hatfield/Darron Lewis (#285) and Benjamin Wallace/Graham Roberts (#88) the Team were kept busy with a warm-up session, qualifying and two races in one day. An eventful day resulted in two P3 podium finishes for Simon and Tom, a lost door, a small fire and a birthday surprise on the podium for a very embarrassed Simon Rudd!

Eddy Hall, GT Manager said: “Testing on the Friday was the first time back in the cars for some of our drivers. All drivers were quickly on the pace. I think we were hoping for a bit more out of qualifying but none the less still a strong result. It was a good start to the season for us after both races for Team-HARD with some good solid points and a great result for Simon Rudd and Tom Barley in the #24 car. P3 in both races gave the drivers and the Team the reward for the weekend. Moving on to the next round I think we will be in a better position as we now know more about our competition and our drivers are more confident in the cars and themselves.”

Simon Rudd – “It was great to be back out racing again. We knew the weekend would be tough against the three upgraded 2017 cars but we were still aiming for the podium.

We restricted our warm-up to 3 laps and also our qualifying plan was to run as short as possible. Although there were some red flags that messed the plan up slightly, we still managed P3 which we were happy with.

Race 1 was a solid start with a P3 finish and some good points. Race 2 was great for us as we worked hard to get P3 in the overall race. It was slightly harder with safety cars and the competition but we made it work to our advantage.

Overall, a really solid start to our season with 2 podium finishes. Hopefully we can continue the good form!”

Tom Barley – “What a great weekends’ racing to kick the season off!! P3 was the theme of the day, with us taking that position across qualifying, race 1 and race 2. Despite our pace being competitive, even compared with British GT, we were struggling to match the seemingly super-fast and newer Ginettas. Both Simon and I had some great battles on track, and once again showed we are here to try and take the big pot home at the end of the year!

Thanks to everyone at Team-HARD for a faultless weekend on and off track. Wins incoming at Silverstone!”

Adam Hatfield – “It has been a challenging weekend for the opening Britcar Endurance round. A lack of Ginetta winter testing certainly hindered our results whilst struggling to get the feel back through the brakes! However it certainly started to come through during the weekend.

Race 1 we finished in a solid 4th place which is all good points towards the Championship. However race 2 we had much better pace and we built a healthy gap in 3rd. Unfortunately contact robbed us of a class podium resulting in the #285 Ginetta having to pit with damage which lead to a fire! Darron however put in a great performance to salvage another 4th in class. All things considered I think we did ok and salvaged what we could.

Mine and Darron’s pace in race 2 certainly shows what we can do.”

Darron Lewis – Saturday didn’t quite get off to the best start as we lost one of the doors in qualifying, so we struggled with pace. We got off to a good start in Race 1, making up some positions. Then I handed the car over to Adam, who did a great job gaining even more places. We were changing the set-up all weekend to find a nice balance. We tried a set-up change for Race 2 and the car was much better. Adam started the stint and, with a storming drive, he got us up to 3rd in class before the safety car was deployed for an incident. Just before the restart Adam got tagged by a BMW meaning he had to pit early. As he came down the pit lane the car was on fire so we thought it was all over! But thanks to Aaran and the boys at Team-HARD, we got back out. We were 4 laps down but I was up for a fight so we did exactly what the Team says ‘go hard or go home’ and we were quickest on the track for a while and we managed to get back up to 4th in class.

So all in all I think with everything that we had to deal with, we managed a reasonable result. Roll on the next race weekend at Silverstone.”

Benjamin Wallace – “In the #88 Team HARD Ginetta G55 GT4, I was joined by 2017 Fun Cup UK champion, Graham Roberts for the opening round of the 2018 Britcar Dunlop Endurance Championship at Rockingham Motor Speedway. Graham will be contesting selected rounds of the Britcar Dunlop Endurance Championship whilst I am focusing on my first full-season in the premier national GT championship”.

The Southport-based driver saw the weekend as preparation for Round Three of the British GT Championship, which visits Rockingham on April 28 – 29.

The Britcar weekend consisted of practice, qualifying and two races on Saturday April 14; a 50 minute sprint and a two-hour race, replicating the race length for the British GT Championship.

Benjamin and Graham qualified 5h in class and finished in the same position in Race 1. In Race 2 the #88 Team HARD pairing finished 6th in the Endurance Classification.

Benjamin said that “the weekend was excellent preparation for returning to the Corby circuit in two weeks for the British GT Championship. Rockingham was a new circuit for me in the Ginetta G55 GT4 and finding a set-up for the track, with its high-speed banking and twisting, bumpy infield sections, is challenging. As a result, the weekend has definitely helped us to prepare for the British GT weekend. We found some set-up solutions and the track-time helped me build up my experience in the car, especially at this circuit.”

Commenting on his team-mate for the weekend, Benjamin was delighted at how quickly he formed a working relationship with Graham Roberts. “Graham was quickly on the pace. We both had the same challenges with the Ginetta, Graham probably more so because he’s only driven the car twice. It was a new experience for us both.”

I’m really looking forward to the British GT weekend. The Britcar Dunlop Endurance Championship experience was very positive. We probably found out more about the car and the circuit than we expected so it was definitely the best preparation ahead of returning in two weeks’ time.”

Graham Roberts – “For qualifying we took a reserved approach, looking only to do 2-3 laps each then park the car to save the new tyres for the race(s). Ben put together a solid lap putting us 5th in class after his initial two attempts were thwarted by red flags. I got 1 clean lap out of 3 and it was ok but there was more time to come so Ben’s lap gave us our qualifying position of 11th overall and 5th in class.”

Describing Race 1 Graham said: “I took the start for Sprint Race and managed to judge the start to a ‘T’, got a great run round the first corner and with a late dive on the brakes into Turn 2, we were 6th overall and 3rd in class. Now I had my sights set on the two Black Mamba Racing Ginetta’s in front but first I had to get past a Class 2 BMW. Sadly no matter how I tried I couldn’t get past the BMW as although it was holding me up in the corners, it was miles quicker on the straights. After a while I dropped back a little and had a nice gap where I just focussed on trying to keep my pace whilst looking after the tyres for when I handed the car over to Ben. Coming up to the pit stop window, I got caught by traffic both slower and faster in all the wrong places which meant Tom Barley was right behind me as I dived into the pit lane to hand over to Ben.

After the pit stops, Tom’s teammate Simon Rudd came out ahead of us. Ben was able to close the gap to Simon but then had a slow lap, possibly due to traffic and wasn’t able to close the gap again. Ben was then left defending 4th place from the Track focussed KTM which he managed very well but just got pipped to 4th by Adam who was on late charge.

Race 2 preparations completed, it was onto the 2 hour race. “Ben took the start for the Endurance Race and held a steady 5th place in class for the majority of his stint then pitted to hand over to me. Unfortunately that’s when issues began to occur for us. I tried to leave our pit box but the car simply wouldn’t move. One of the mechanics quickly clocked on to what the problem was and fixed it but the hold-up cost us an extra minute in the pits, losing plenty of time to the other competitors. I left the pits and tried to set a good pace to try and close down the gap to the cars in front but had no idea how far ahead they were. A safety car appeared when one of the Black Mamba Racing Ginetta’s suffered an engine failure which closed up the pack. At the restart, I managed to worm my way past Tom Barley as we both un-lapped ourselves from the leader but a few laps later Tom retook the place and pulled a gap on me as I was struggling with tyre wear. A few laps later I ended up taking a trip across the grass and scooped up a marker board at the same time, however it got stuck in front of the radiator grill and the engine temperature began to creep up. Another visit to the pit lane to remove said marker board cost us some more time! For the last 15 minutes, I was trying my best to drive as smoothly as possible as the tyres were completely shot at this point and the car was experiencing some fuel starvation coming out of Turn 2. In the end we finished 6th in class and 8th overall.”

Summarising his first Britcar race weekend Graham said: “My first race weekend in Britcar with Team-HARD has been brilliant. There were a lot of difficult factors for me to contend with, like learning the Rockingham circuit having never driven there before and learning to drive a 2017 Ginetta with ABS and Traction Control. All this whilst being in an uncomfortable driving position all weekend. But I got on really well with my teammate Ben and we could have had a podium from the Sprint Race so everything considered it’s gone really well. I’m already looking forward to the next one, albeit hopefully in a car that is more accommodating to my lofty physique!”

The next Britcar Endurance race is 12th May 2018 at Silverstone GP circuit. 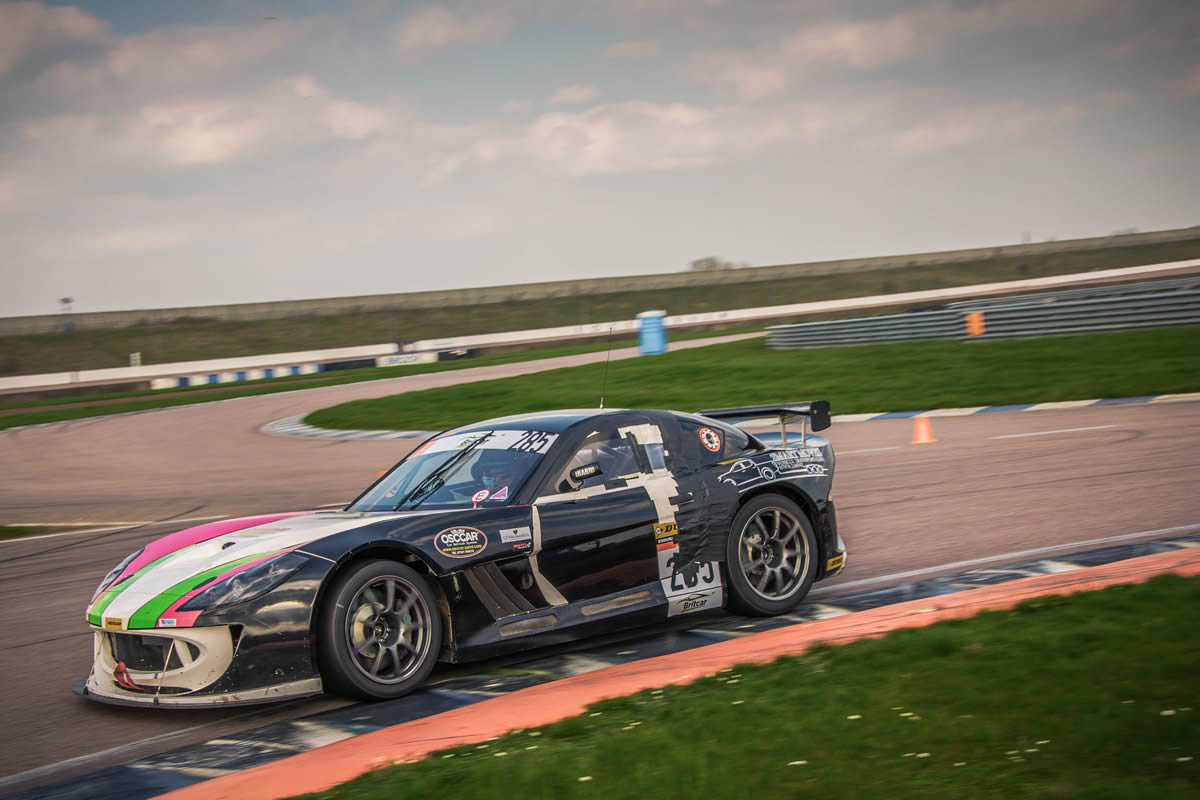