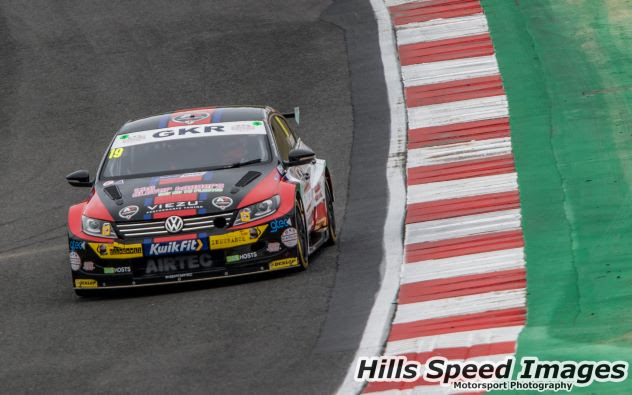 Kwik Fit MSA British Touring Car Championship star Bobby Thompson produced a career best performance to date on the opening weekend of the 2019 season at a damp and foggy Brands Hatch Indy circuit, serving notice that he will be a major force to contend with in his second season in Britain’s premier domestic race series.

A career best sixth place effort in the opening race, coupled with his first official fastest lap in BTCC competition and a maiden Jack Sears Trophy win highlighted a day that ended with the 22 year-old Hornchurch based star sitting 12th in the overall points table.

With the fabled 1.21-mile Brands Hatch Indy circuit shrouded in fog on race morning, the driver known throughout the paddock as ‘Bobster’ capitalised on intermittent rain and interminably greasy track conditions to convert Saturday’s promising 19th place effort in qualifying into a race day showing that backed up his pre-season claim that he would be a contender for points in every one of the 30 race slate this year.

“I’m obviously delighted with how the weekend went,” commented Thompson as the 30,000 spectators that lined Brands’ natural amphitheatre throughout the action packed day. “But this is where I feel I should be and where our overall package should be so I am keeping my feet firmly planted as we all know we have to put in the same effort at every round.

“But I’m definitely going to enjoy today’s performances tonight before it is back to work on the car tomorrow and it is just a relief to give my sponsors something to cheer about at the start of what will be a massively competitive season.”

Sunday morning’s mist and drizzle left Thompson and his #19 GKR Scaffolding with Autobrite Direct outfit run by Team HARD with a major dilemma about whether to go with slick or wet tyres for the opening 24-lap encounter. The call was for slicks but with the 30-car field split evenly it was clear that the opening race was going to either go very well, or very badly. It soon became clear that Thompson had chosen the correct option.

Understandably cautious when the lights turned green, Thompson slithered through a tense opening lap in 24th place as the wet shod runners pulled away but by the fifth lap the track conditions had already turned in his favour and on lap six the 2017 VW Cup Series Champion set the fastest lap of the race as he began picking off rivals one by one.

“I felt confident in our tyre choice and I knew that as long as I avoided any trouble in the first few laps we could get a really good result. It was such a satisfying feeling just driving up to people and passing them and then moving on to the next car.”

By the tenth lap Thompson was in the points and by lap 17 the #19 machine had cracked the top ten. Chasing the Mercedes of Adam Morgan up towards the leaders, Thompson set what would stand as the fastest lap of the entire race on lap 15 and when he passed the Honda of Rory Butcher he also took over top spot in the Jack Sears Trophy running order.

Even with the rains returning in the closing laps, Thompson was so far ahead of the nearest wet shod runner that there was nothing to worry about although the worsening conditions prevented him from launching a final assault on Morgan for what would have been fifth place but there were still scenes of jubilation in the Team HARD garage when he crossed the line in sixth place for the best finish of his BTCC career to date.

“We had a bit of luck with the tyres but regardless of that the car felt good and it just gives everyone a major boost for the rest of the day,” added Thompson, whose efforts meant a career best start on the third row for the second race of the day, which would also play out on a damp track.

Unlike race one, everyone save for Tom Oliphant opted for slicks for the second 24-lapper and from the outside of row three Thompson made a decent start to complete the opening lap in eighth. A solid pass on Aiden Moffat at Graham Hill Bend a lap later put the #19 machine into P7 but as the race settled down several of the more fancied runners who had started the race out of position following the wrong tyre choice in race one began to make their move and after some intense battling Thompson slipped back to 15th.

The second half of the race was spent squabbling with the works Honda’s of Dan Cammish and Matt Neal and the defending series champion Colin Turkington and although a second straight top ten finish wasn’t possible, a late re-pass on Turkington saw Thompson claim 13th place at the flag for several more valuable championship points and, perhaps more significantly, second place in the Jack Sears Trophy.

“Race two was obviously a lot harder than race one but we showed that even when everything is equal in terms of tyres and track conditions we still have legitimate top 15 pace,” added Thompson, one of the current crop of BRDC Rising Stars who also works as a fully qualified ARDS Race Instructor. “Even though we fell back a little bit we showed that we could race and battle with the factory cars and there were two incidents where I just put myself in the wrong position and in the BTCC when that happens you can lose three or four places at a time. But the car had the pace to stay with the Honda’s and BMW’s and passing Turks late on was a really sweet.”

The weather finally calmed down for the third and final race of the day leaving things as a straight scrap for the first time and once again Thompson remained in the thick of the tussle for points even though the #19 GKR Scaffolding machine was beginning to develop a tendency to understeer, especially coming out of Druids Hairpin.

“We were on the harder tyre for race three so we knew it would be tough to hold off a couple of guys behind us on the softer rubber but even though the car wasn’t handling as well as it was earlier in the day we were still competitive,” continued Thompson, who spent much of the race battling in close quarters with Jason Plato.

“I knew I had Jason right behind me and he made a couple of moves which I managed to defend but I didn’t want to defend too much as I felt we could both catch the pack in front. I think he felt the same because we spent a lot of laps nose to tail but without him trying to pass.”

Lying in 13th place with five laps to go Thompson, Plato and Dan Cammish finally caught the pack that were squabbling over ninth place but just as Thompson thought a second top ten in the space of three races was possible, Plato made his move.

“I must have left just enough room going into Stirling’s for Jason to get his nose alongside and although we raced wheel to wheel all the way down the main straight, I was on the outside line going into Paddock Hill Bend and I had to lift and that let Cammish through as well. It is a shame as I thought I had the pace to pick off one or two of those in front but it was a good battle none the less and we came away still in the points.”

Thompson crossed the line in 15th place for the final championship point, and in doing so equalled the total number of point scoring finishes he achieved during his entire rookie season. Adding his first official fastest lap into the mix plus his first Jack Sears Trophy victory and there were plenty of reasons to smile at the end of the day.

“I’m obviously very pleased with my overall performance and the performance of my crew. We are 12th in the championship and second in the Jack Sears Trophy and we’ve shown we have the pace to compete for the overall win in that and to fight for points in every race.

“There is still lots of work to do and my engineers are convinced there is plenty more pace still to be found so I’m going to be heading to the next meeting at Donington Park in a very good position indeed.”