Bobby bears the brunt at Silverstone 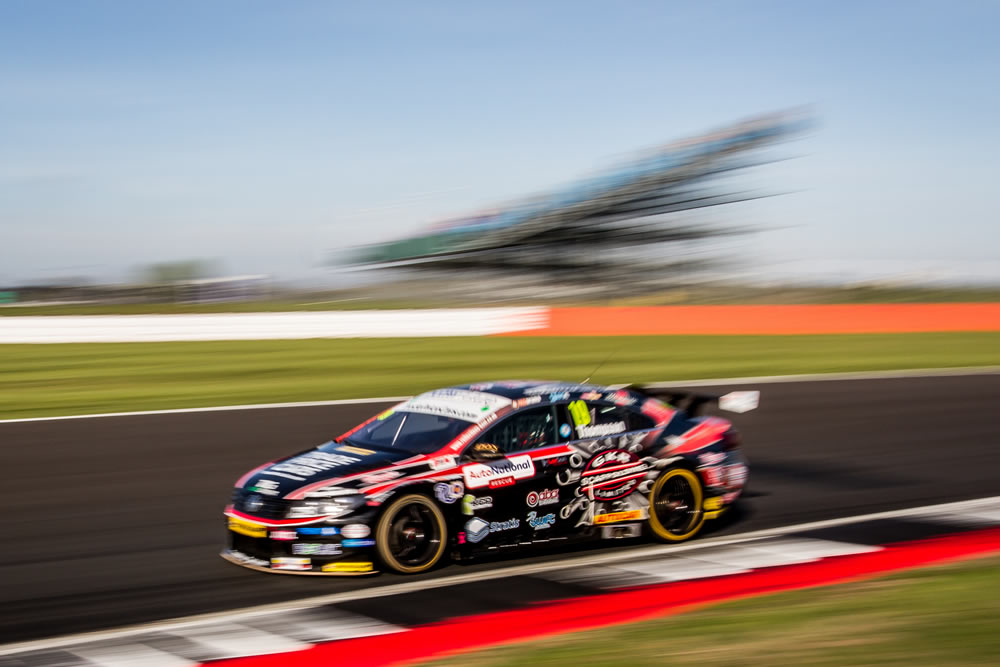 The penultimate weekend of the record breaking 60th anniversary Dunlop MSA British Touring Car Championship season may have been held at the home of British Motorsport but there were few home comforts for BRDC Rising Star Bobby Thompson who left Silverstone without adding to his points tally.

Prior to Sunday’s trio of 22-lap races around the fast, wide open blasts of the 1.64-mile Silverstone National circuit there was a considerable mood of optimism within Thompson’s #19 Team HARD with Trade Price Cars VW CC team, which sported a sleek new black livery for rounds 25, 26 and 27 of the 30-race 2018 Championship.

Not only was the 22 year-old Hornchurch based driver, known throughout the paddock as ‘Bobster’ returning to the site of his first career car racing podium, his slippery shaped VW CC was well suited to the track layout as was the case last month at the Rockingham Motor Speedway where the 2017 VW Cup Series Champion scored a BTCC career best 7th place finish.

However set up issues throughout Saturday’s two practice sessions and the crucial 30-minute timed qualifying period and contact from other drivers in two of Sunday’s three races left Thompson feeling frustrated despite finding considerable extra pace on race day.

“I can’t pretend to be anything other than really disappointed with the weekend as a whole,” commented the current BRDC Rising Star, who battled from 27th on the grid to 19th in race one despite stalling at the start and then suffering contact from another driver after fighting his way into 17th position, just two places shy of the points.

“We couldn’t quite get the sweet spot on the car during practice on Saturday and although we found some extra pace in qualifying, so did everyone else and while six tenths off pole position may not seem like much in the BTCC it is massive and around here with such a quick lap and only six corners it is more significant than anywhere else.

“I made a bit of a mess of my start in race one but we had changed so much on the car overnight that I could take advantage of the really good slipstream that you get here and pass a lot of cars,” continued Thompson who took advantage of a couple of other drivers retiring but had overtaken eight drivers on the road within the first 12 laps of an extended 25 lap race before being unceremoniously dumped out of contention at Luffield, dropping him back to 20th and out of the reach of the group battling for the final few points paying positions.

“I know what happened and I don’t want to point any fingers as I have a lot of respect of the person who basically just smashed me out of the way but I had passed him cleanly two corners earlier and was holding the inside line into Luffield when I just got sent flying. The hit broke our rear bumper, Ackerman plate and hurt the rear balance and the car was never the same after that.”

Luckily Thompson was able to continue and even regained one of his lost positions to take the chequered flag 19th and with his teammate Mike Bushell suffering a grid penalty for the second race, Thompson was promoted to a ninth row grid slot for a second race that should have brought home a decent haul of points nut instead brought nothing but more unnecessary damage to the #19 GKR Ltd backed machine.

“I felt that we were capable of getting some decent points in race two especially as we were on the soft tyre, which was the faster of the two options we had. I was going to be on the hard tyre for the third race so I knew that if I had a good run here I could maybe even get into the mix for the reverse grid for the final race which would help massively considering my tyre choice.”

Thompson made a much better getaway when the lights turned green but never got the chance to settle into a rhythm and continue his progress towards the points as a mirror image crash to that which he suffered in race one caused enough damage to the rear of the car to force him into early retirement.

“I lost two places on the first lap just because I didn’t want to get caught up in any of the bumping and barging that was going on and then as we arrived at Luffield I was hugging the inside line and out of the corner of my eye I caught a flash of red on the grass inside me and the next thing I know I’ve got two wheels in the air and a broken rear right tow link. I made it back to the pits but there was too much damage to continue and that was basically my weekend over as far as scoring points was concerned.”

For the second time in two races the #19 were faced with a flat out dash to get Thompson’s car ready for the third and final race of the day, for which he would start 31st on the less desirable harder tyre. Despite carrying a few battle scars Thompson made the grid for what was little more than a damage limitation exercise.

“Despite all the damage I had suffered the car still handled pretty well and I was able to pass cars while everyone was still bunched together,” concluded Thompson, who finished 21st and set the fifth fastest lap of the 13 drivers on the hard tyre in race three. “But there was still some really aggressive driving going on and there were a couple of situations where I had to stand my ground, which probably didn’t make me too popular with one or two people but it is frustrating when you catch people who would rather weave around and cost you both a second per lap rather than race and work together to catch the pack in front.

“I feel like I have raced everyone cleanly and with respect all year but even though I am a rookie in the BTCC I won’t be pushed around. I have got a great group of sponsors who all put their money into my racing and without them I would be working as a plumber with my dad. They have stayed loyal to me and when other people’s mistakes stop me from showing my potential and giving them the success that they deserve it can be massively frustrating so I had to get my elbows out and race others how they race me.”

Thompson returns to his home track at Brands Hatch for the final weekend of the 2018 season in two weeks’ time where he will look to improve on his current position of 28th in the overall points standings, 17th in the Independents Championship and 10th in the Jack Sears Trophy.