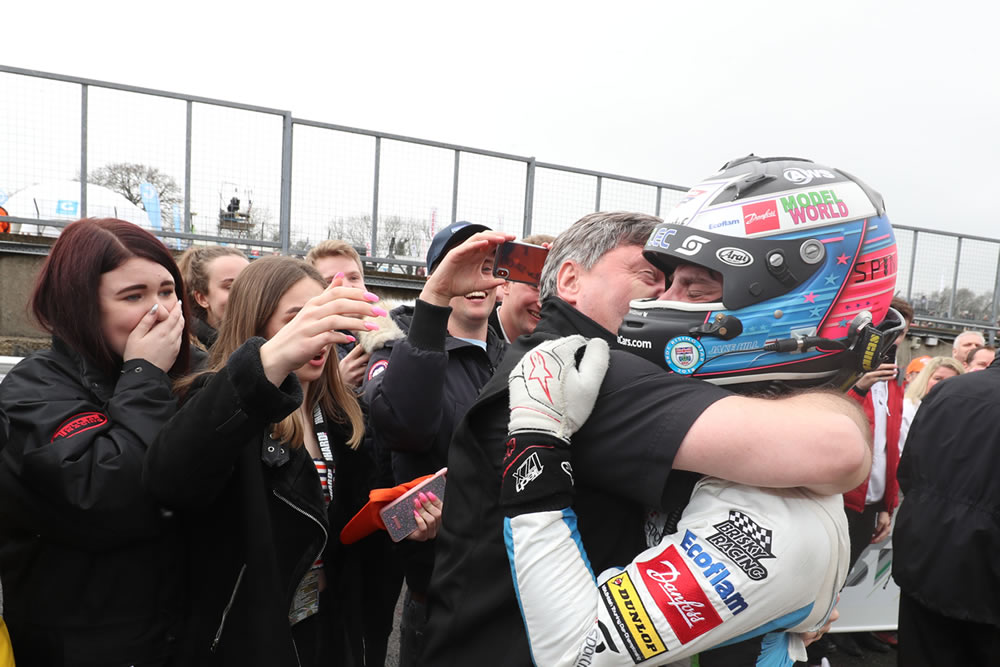 Team HARD scored their best placed finish in the BTCC with a 2nd placed finish by Jake Hill in the 2nd round of the Championship at Brands Hatch last weekend.

Going into the races the Team HARD drivers had managed to qualify their VW CC’s in 22nd (Mike Bushell) 25th (Jake Hill) 27th (Bobby Thompson) and 30th (Michael Caine) after a very close qualifying session where the top 30 drivers were covered by just 0.921 seconds.

In the opening race Mike Bushell retired early after unfortunate contact with teammate Jake Hill. Bobby Thompson and Michael Caine had solid first races to start their campaign. Both managed to make up a number of positions and finished 19th and 21st respectively.

The second race of the day was where all the action happened. The rain had just eased off and there was a decision to make whether to go on wets or risk slick tyres. Mike Bushell and Jake Hill took the gamble to go with slicks. Up until the 10th lap the track was still favouring the wet shod cars but a dry line started to appear and the slicks shod cars were able to scythe their way through the field. Hill and Bushell were on a charge. Hill’s cause was helped with a coming together between Moffat and Proctor that demoted Moffat down the order. As the laps came down Hill kept pushing for the win. In the end he had to settle for 2nd place which was greeted with immense emotion in the Team HARD garages. With Mike Bushell bringing his VW CC in 8th position it was a double celebration for the team. Michael Caine scored another solid 24th position while a mechanical fault brought Bobby Thompson’s race to a premature end 5 laps from the finish.

After the frantic finish of the second race, the team were brought down with a bump in race 3 with Moffat making contact with Jake Hill on the warm up lap causing damage to the rear toe link of Jake’s car that meant he was destined to finish 3 laps down after the team had made some repairs.

After the heroics of Jake in the 2nd race it was time for Mike Bushell to step forward. ‘Bomber’ Bushell didn’t disappoint with a robust drive that saw him take a well earned 5th place and the lead in the Dunlop ‘Forever Forward’ award, which rewards drivers for the number of places that they have made up during the race weekend. Continuing his solid results, Michael Caine scored a 24th placed finish while Bobby Thompson finished 26th. Jake Hill was classified 29th, 3 laps down. 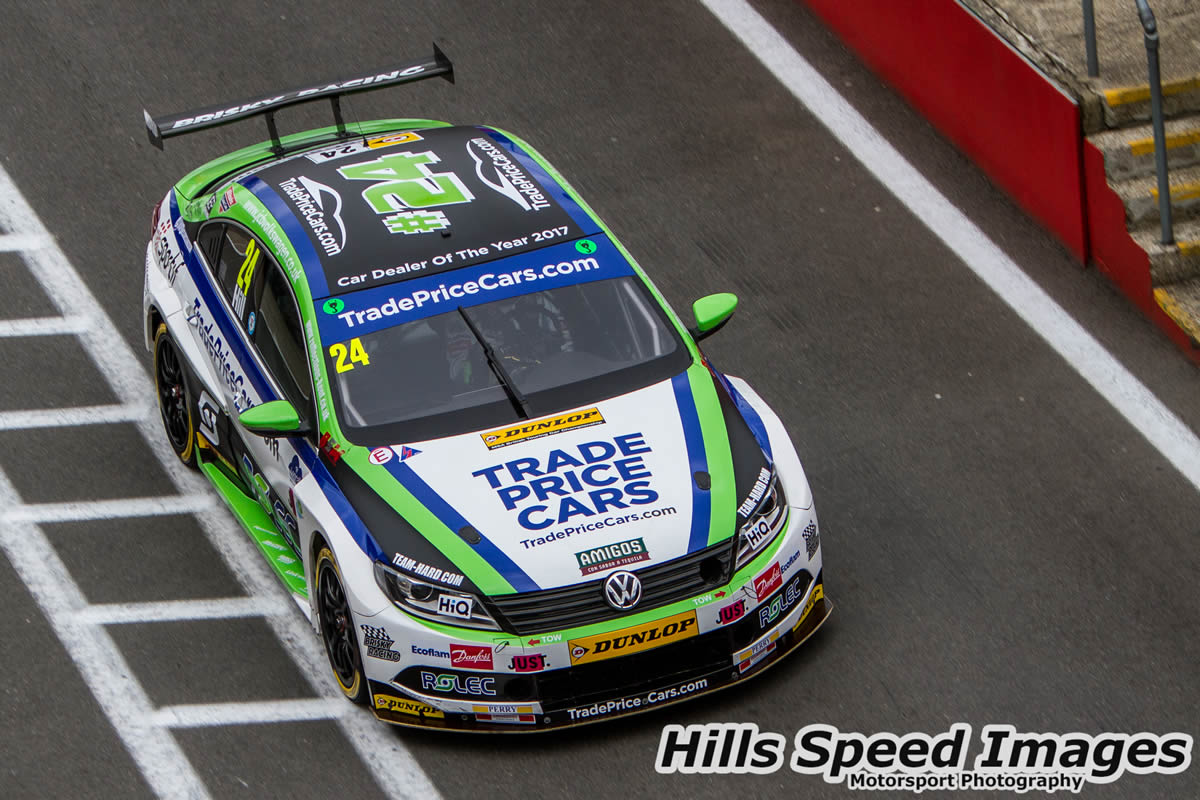 “Qualifying was frustrating, and race one saw contact with my team mate Mike (Bushell) which was tough. But on the grid for race two my team manager Jamie and I said over the radio ‘On three say which tyres…3-2-1- ‘SLICKS’….!!!! So we went for it.”

“Oh my word that was CRAZY! We decided last-minute to go to slicks, it was always going to be sketchy, but very early on I knew we’d made the right choice. The car was mega, I had a look at passing both Proctor and Moffat but they were so defensive so it wasn’t worth the risk. I am beyond happy! I am so, so grateful to so many people who have helped me get to this point – obviously the legendary Tony Gilham and the boys at Team HARD, especially Geoff (Kingston) and Jamie, Josh, Carl, Nathan and Gary who have been on my car….my amazing supporters. I have to say I would not be racing in anything – let alone BTCC – without their help.

I’m worried I will forget someone – but my 2018 partners Rolec Racing, Trade Price Cars, the awesome Richard Wheeler from Brisky Racing, Ecoflam, Danfoss, Bill Rawles Classic Cars, AWS Appliance Spares, Scoria Tech, Zynth, Jakob Ebrey Photos, Spine Optics, P1 Nutrition, Tech Max Pro Gear, Torq, Luke at the BRDC,….but the one person who has been with me since the beginning, from Ginetta Juniors in 2010 to now and has never, ever let me down is my ‘Papa Smurf’…John Miskin from Sportif Motor Group…..I am so unbelievably grateful for everyone’s love and support ……Tony Gilham and the whole Team HARD crew have believed in me since 2016, I love this team, I love Tony, Gary, Jamie, Sam and everyone…David Boor and Andrea and the Fantham family and the whole crew are amazing! I am so HAPPY!!!!!!” 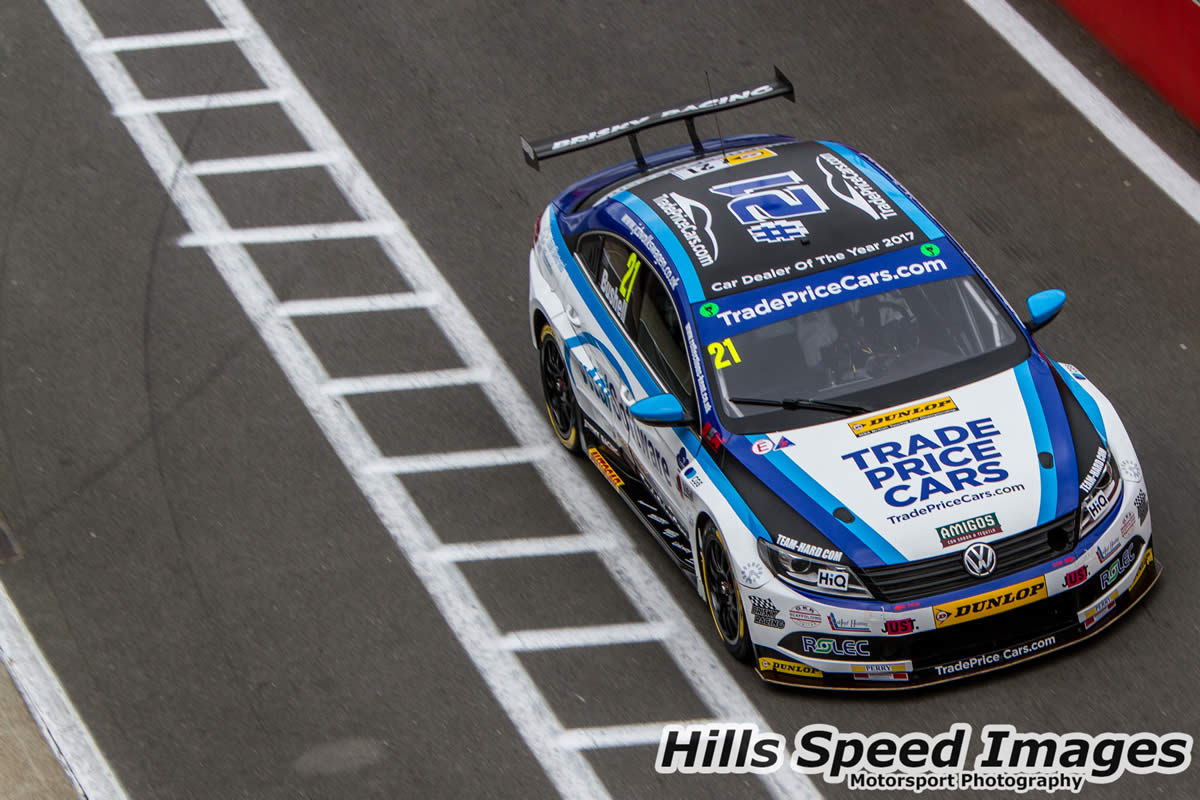 “I wanted to arrive this year as a different Mike Bushell and I think I’ve proved that in winning the first Forever Forward award and almost scoring a maiden podium on my BTCC return. I’ll be continuing my ‘no fear’ approach from this weekend onwards”

“The car is perfect, I’m comfortable in it. I’m already quick, but as I learnt from winning two Clio Cup titles… I need to smooth out my rough edges and learn what precision means in the BTCC”
Michael Caine 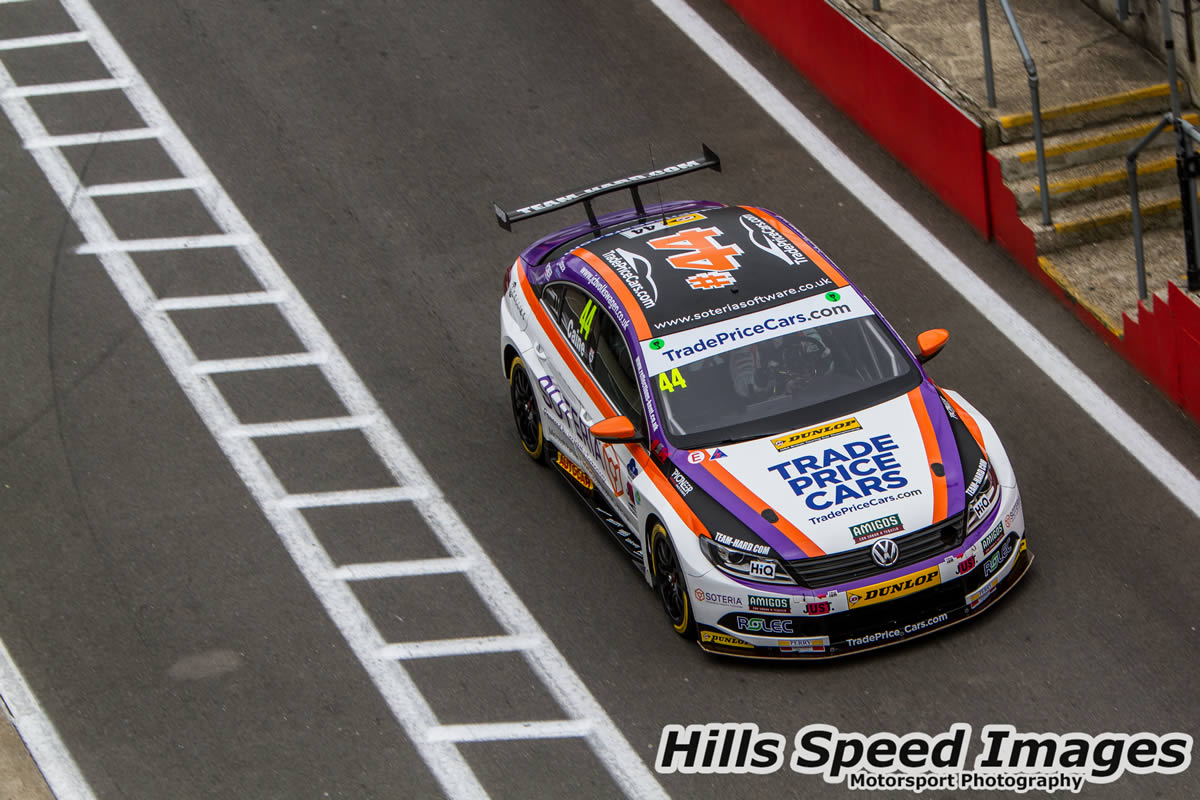 “For me it was a great weekend ! I am still learning the car and starting to understand what I need from it ! I can’t thank everybody at Team HARD enough for the way they looked after my family and sponsors ! I think it’s going to be a great year.” 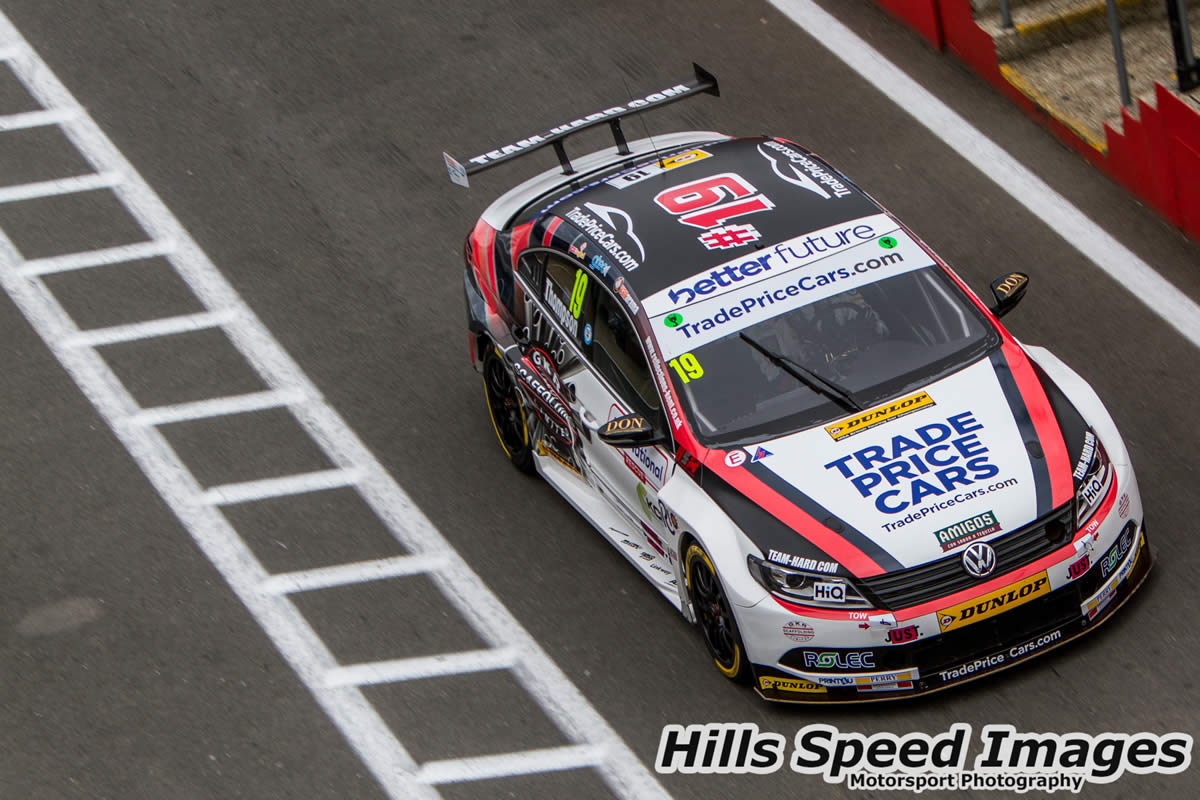 “I won both VW Cup races and set a new VW Cup lap record at Brands last season, said Bobby. “I knew I wouldn’t be in a position to repeat those results on my first BTCC weekend and although not everything went exactly as planned, the day as a whole was truly unforgettable.”

“Physically I am fine as I train in the gym two hours a night but nobody can really make you understand how demanding the BTCC is until you experience it. Apart from the three races you have the autograph session, the drivers parade and the team’s own Question and Answer session in their hospitality unit for all our sponsors and because Tony (Gilham, Team HARD principal) makes sure that as many fans and supporters can see inside the garage there are always lots of well-wishers and fans who want to chat and wish you luck.”

“For MY first weekend it has been incredible. I have had so much support from the fans and I know that I will be a lot stronger at Donington Park for the next three races just because I have had the whole BTCC ‘race weekend’ experience under my belt. But I also know that the team have a really good package that is capable of being on the podium as we proved today with Jake (Hill) and I’ll be pushing harder than ever for stronger results next time.”

“It’s been a lot of hours, a lot of time, a lot of hard work,” explained Gilham. “So today has been emotional – they are essentially four brand new cars – there’s very little remaining from last year’s car. We rolled the dice a little bit with the chassis changes but we trust in our engineering team and it’s paid dividends out the box.

It was a decent start to the year at one of our weakest circuits. So it’s been a good weekend. We had a little bit of a lucky break, but it was also an educated risk to go for the slick tyre in race two so it’s nice to take that risk and for it to pay off.”