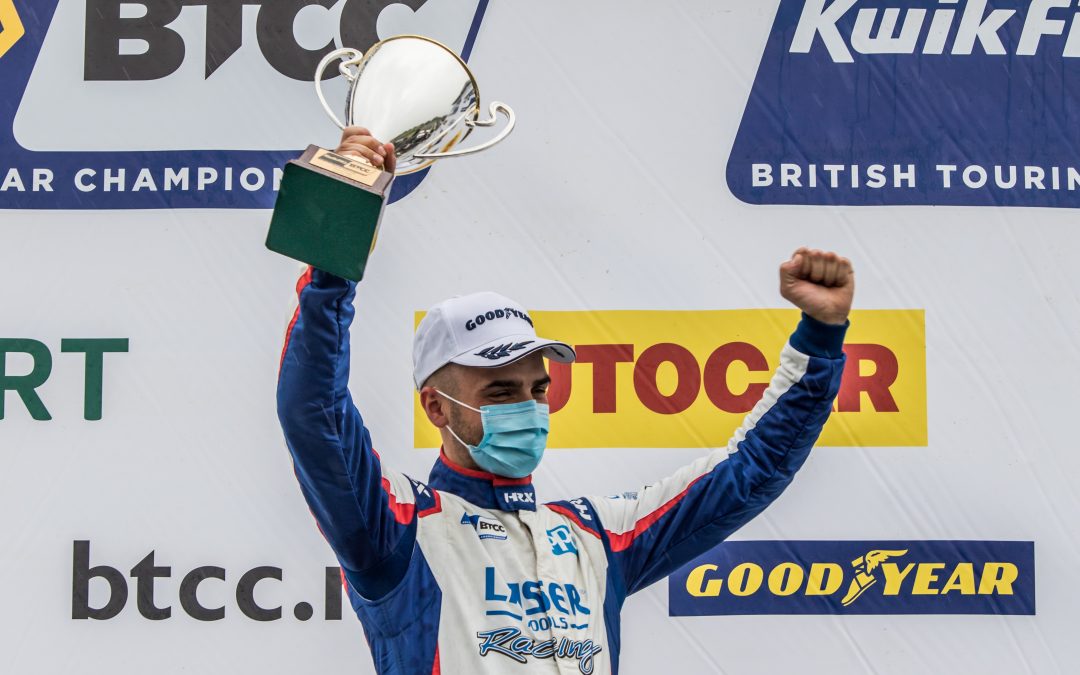 Two podiums for the team, one for our reigning BTCC Champion, Ash Sutton, and one for Aiden Moffat!

The qualifying session on Saturday afternoon was (as usual on the very short Brands Hatch Indy circuit) difficult for drivers, with laps times only around 48 seconds, and 29 cars on the track trying their best to get a clear run. Not an easy task. Aiden was proving to be fast and after fitting a new set of tyres, even faster. The session finished with very respectable results for the team: Aiden in 5th, Ash in 7th and Carl in 18th. 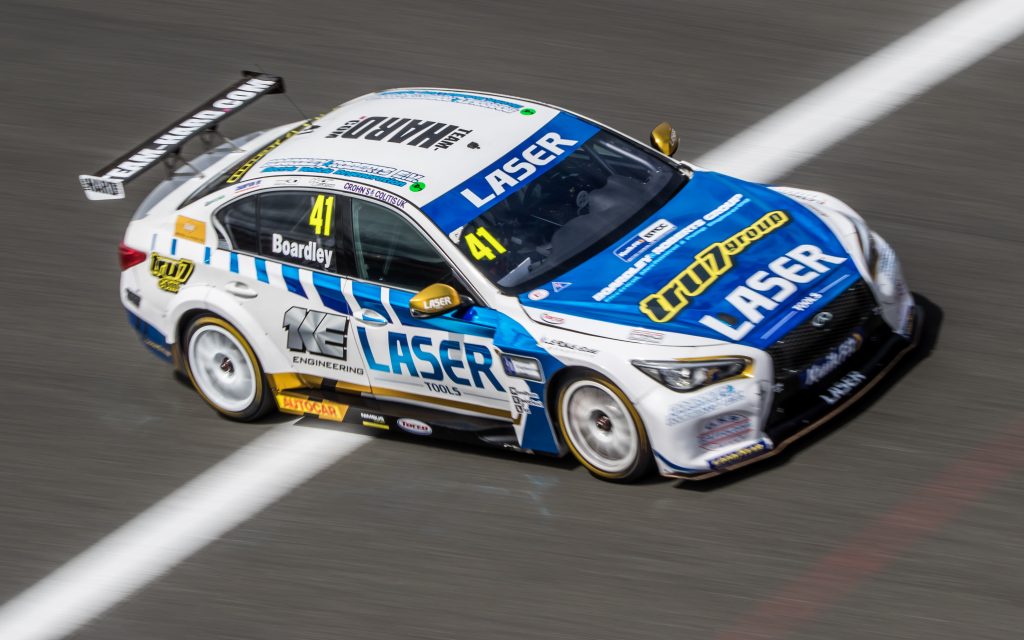 Sunday morning was cool and damp with rain in the air and lots of rain forecast for later on. No one had run a damp or wet set-up on the Saturday in the free practice or qualifying sessions, so no data was available, and the teams weren’t sure how dry the track was as it was definitely damp in places under the trees. With Aiden in 5th and Ash in 7th, it was to be an important start. Aiden stepped up to the challenge and had a terrific start — after the first two corners he was up to 2nd with Ash 4th! On Lap 2 Carl was up to 14th to prove his car’s pace.

As we passed halfway, Aiden then went back to 4th as pole-sitter Dan Rowbottom came through in the Honda. Then with Jake Hill getting a bit rough, Aiden went down to 8th but Ash was able to get up to 5th in the action. Carl was having a great battle in the midfield and running in 17th.

As the race moved into the last 4 laps, Ash was all over the back of Jake Hill and Aiden was looking great behind Chris Smiley. At the line, Ash was 5th and Aiden was 8th with Carl in 17th. This was a very good result for the team, setting them up for Race 2. 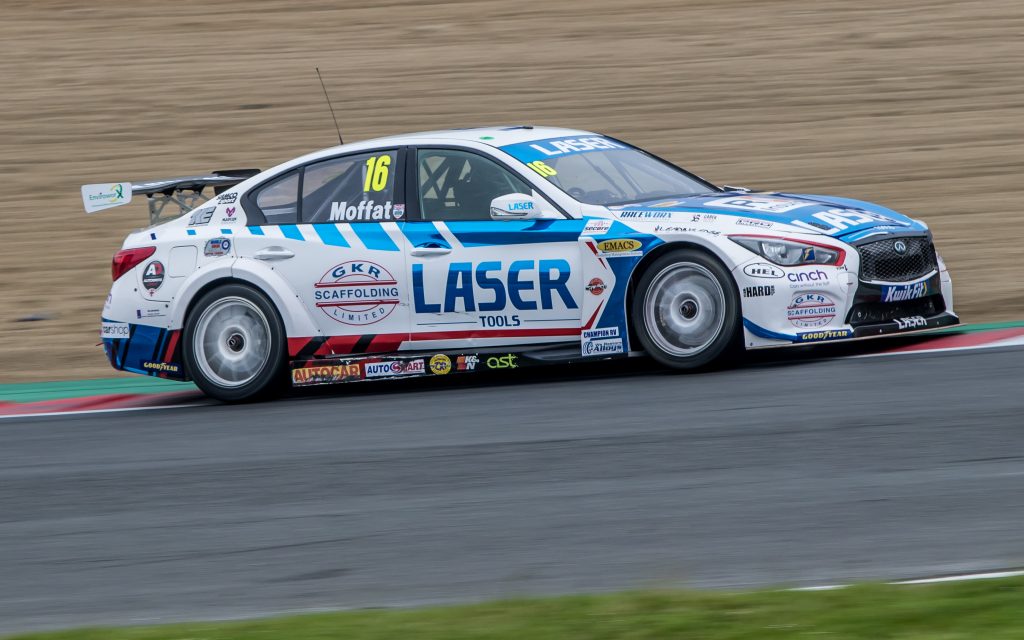 With Ash starting 5th and Aiden 8th, as the lights went out Ash was immediately up to 3rd before the start of some rough stuff put him down to 5th and Aiden to 9th. By lap 11 there was rain on the windscreens but Ash was still 5th, with Aidan now 10th and Carl 20th. With 10 laps to go Ash was up to 4th and Aiden to 9th with Carl still in 20th.

With Ash pushing hard to try and get into 3rd, his title rival Tom Ingram was up into 2nd and it was all to play for. With no one willing to take any risks, the positions stayed the same but as when it came to the last lap Ash went for the gap and was up to 3rd! And then with 50 metres to go Ash took 2nd from the BMW of Tom Oliphant. Great stuff. The reverse-grid draw then took place putting Aiden in P4 and Ash in P11 to start Race 3. 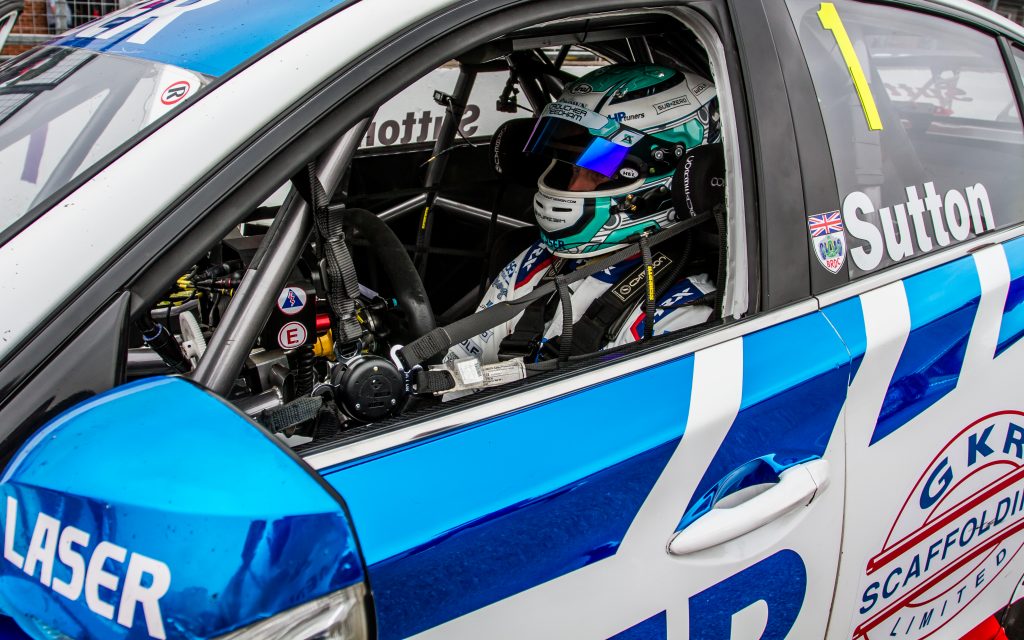 It was the last race of the weekend and it was still dry. Aiden had another very good start and was immediately up to 3rd off the line with Ash in 9th, with Carl up to 18th. On lap 2 Aiden did the fastest lap of the race so far and then took 2nd on lap 3 with his 15Kg of ballast.  Aiden maintained pressure on Adam Morgan at the front whilst defending from Jack Goff who was immediately behind him. But on Lap 11, Jack Goff took Aiden for 2nd at Clearways as he ran just a fraction wide, but of course Goff had no ballast on board. Ash was still in 10th despite his maximum ballast and Carl was in 19th. Lap 15 then saw actual rain falling, but it wasn’t heavy at this stage. With 5 laps to go, Aiden was getting real pressure from Jason Plato in 4th and the lap times were starting to go up as the rain started to reduce the grip. Right to the the final lap Aiden was trying everything he could to keep Plato back but Plato nudged him going into Clearways which meant that both cars were in a drag race up the main straight to see who would get to the chequered flag first and get the P3 podium. 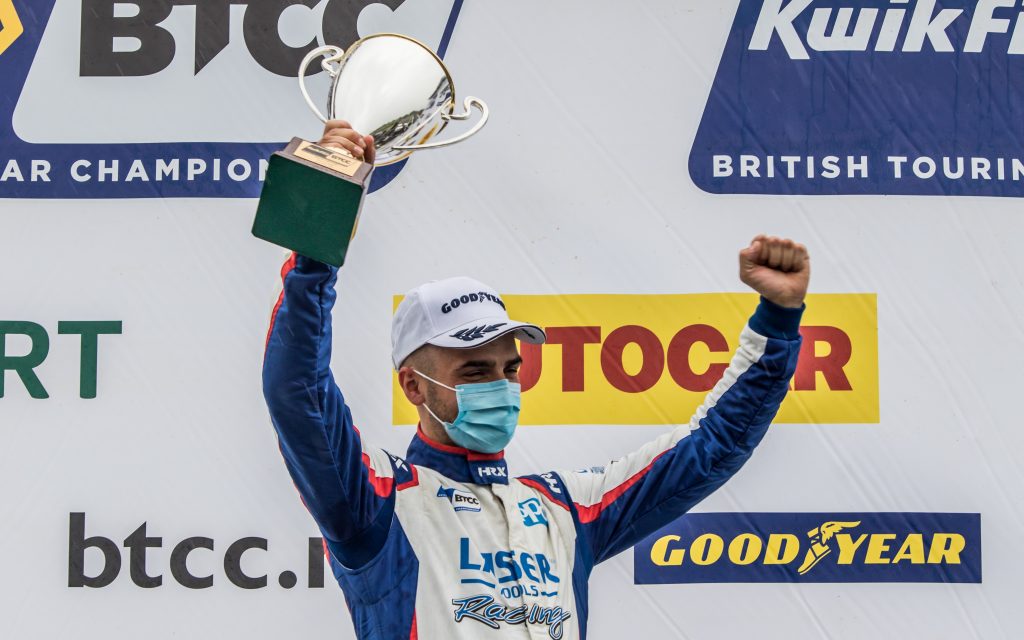